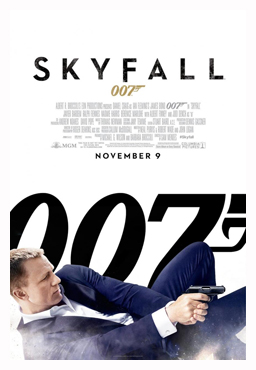 This Sunday night on the couch I decided to revisit James Bond’s latest adventure!

Skyfall is a very interesting and entertaining entry in this 50 year old series in that it gives us all the classic elements that we’ve come to expect from a Bond film and yet, takes it into new and unexpected territory. Not everyone is going to like where it goes but, I certainly did. The story is actually quite simple. After a mission goes awry, 007 (Daniel Craig) is thought dead but, is actually living in secret, drowning the negative effects of his job with sex and booze. But, when a mysterious and sinister individual targets MI6 and M (Dame Judi Dench) in particular, Bond returns to action despite doubts from some of his superiors that he still can handle the job. Writers Robert Wade, Neal Purvis and John Logan craft a story that is part spy thriller and part Silence Of The Lambs as Bond faces not a villainous organization or rogue government but, one very dangerous and psychotic ex-MI6 agent known as Silva (Javier Bardem), who is bent on avenging what he feels is a betrayal by his former boss, M. It’s a daring direction to give this Bond film a more personal focus despite it’s scope and having Bond defending, not Queen and Country but, the one person he can even remotely consider family, M, from a man whose motives for revenge are equally personal. And director Sam Mendes (American Beauty, Road To Perdition) is more then up to the task. Mendes gives the film the epic scope we’ve come to expect from these movies as the film travels from Turkey to Shanghai and from Macau to London and Scotland but, never looses focus on the characters or story. He directs the action in a refreshingly old fashion manner, no more evident then in the thrilling train set pre-credit sequence. No quick cuts or shaky-cam, just good intense action and the result is very exciting and also accents the story, not becomes it. He gets great performances out of his cast. Craig is sensational as a Bond, who is a bit burnt-out and bitter yet, is driven by duty and loyalty to return to a life he has a chance to escape… a life that maybe is right for him after all. Bardem is simply brilliant as the demented and dangerous yet, disturbingly flamboyant, Silva. A man who is Bond’s equal in many way’s but, is twisted by his inner pain and thirst for revenge. Dame Judi Dench is wonderful as usual in an expanded role for M. She and Craig are magic together and it’s great to see them share so many scenes after Quantum Of Solace kept them apart for almost that entire film. The supporting cast including Naomie Harris (Eve). Ralph Fiennes (Mallory) and Ben Whishaw (a young, computer geek-ish Q) are all excellent and provide great support for the principles. Mendes makes this flick look great with some stunning camera work such as the Blade Runner-esque Shanghai and the moody moors of Scotland. The film is deliberately paced but, it is more thriller then action flick although, there is plenty of the latter. Round that out with a very Bond score by Thomas Newman, a classic Bond theme song by Adele and one of the best opening credits sequences in some time and you have a solid James Bond flick that is both charmingly familiar and yet boldly treads new ground. Bravo!