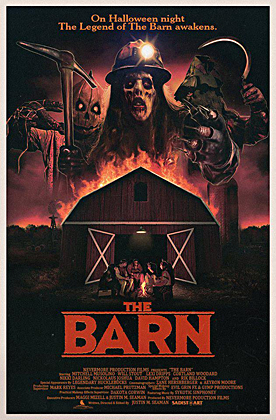 Crowd funded horror/homage definitely has it’s heart in the right place and knows it’s 80s influences well, even if it isn’t quite as successful at delivering the goods as the films it’s trying to pay tribute to.

Flick starts out in the small town of Wheary Falls in 1959 where a Halloween set Harvest Hootenany festival goes wrong for one little girl who unwisely challenges a local legend about three demons that inhabit a local barn. The film then jumps 30 years to 1989 where Halloween obsessed teen Sam (Mitchell Musolino) and some friends accidentally awaken this legendary trio of demons while stopping in Weary Falls on the way to a Halloween night rock concert. Now Sam, his best bud Josh (Will Stout) and pretty Michelle (Lexi Dripps) find themselves battling the demonic Scarecrow, Boogeyman and Hollow Jack, that they have awakened from The Barn.

80s homage is written, directed and edited by Justin M. Seaman and the filmmaker’s intentions are certainly noble. The flick does indeed have the feel of one of those 80s horrors and even gives it an old VHS look with scratches and grain and muted colors. For nostalgia purposes, the film knows it’s source material well and we sense Seaman has a genuine love for these films and the horror genre in general. The basic story certainly works for the type of film it’s trying to be and the director does have a good visual eye and achieves a lot on a small budget. Where the film loses ground is in the writing and the editing. The dialogue is simply very stale and the exposition sequences seem to go on and on and are flat and un-involving. Seaman could have cut out a good ten minutes of talkiness from his homage and gotten it in at a much tighter 90 minutes, or less, and the film would have moved much better. It is a bit too slow paced for it’s own good. There were sequences of talk that felt like they could have been removed completely without hurting the movie, such as Sam’s talk with his dad and when they meet George Hayward (David Hampton), who was with the little girl in the opening sequence. Drunken George’s dialogue seems to go on forever and basically adds even more exposition to a local legend that was fine as it was. His story only convolutes things and the possible way of sending the demons back he relates, is just weak. Sometimes a bit of ambiguity is good, instead of explaining things in too much detail. As a matter of fact, the whole 1989 Halloween Hootenanny sequence goes on way too long, a prime example of how better writing and editing could have made this tighter. The horror sequences, featuring the three demons, themselves are fine. They are not scary or suspenseful, but they do work and Seaman’s demons are effective enough on the homage level they are intended. The FX are quite good for a low budget flick, especially the gore and they do emulate 80s FX work very well. As nostalgia, the film works very well in many ways, especially with Rocky Gray’s cool 80s style electronic soundtrack to add even more of the 80s feel. But as a movie, it’s a bit tedious and flat at times and lacks any real suspense and scares to make it really special. It needed some life to it’s scenes and performances.

While on the subject of the performances, to be too picky over the acting in a low budget film like this, isn’t really fair. Let’s be honest,  the acting in a lot of the films that this flick is paying homage to, wasn’t exactly award level either. The cast in one sense are fine, though some of the dialogue reciting is a bit flat, but that could also be from the need for stronger guidance from a first time filmmaker. Mitchell Musolino is OK as Sam, as is Will Stout as Josh, though as heroes they are a bit dull. It also doesn’t help that lead Sam’s character is kind of a moody sourpuss and hard to endear to. At least Stout’s Josh is a bit more animated and likable. The one cast member who stands out a bit is cute, girl-next-door Lexi Dripps who is actually endearing as the perky object of Sam’s awkward affection, Michelle. She is one of the few cast members who sounds like she is talking naturally, not reading from a script. Sadly, the character of Michelle disappears for most of the third act action and when she re-emerges, it’s as a bound and gagged damsel in distress only there to be rescued by Sam and Josh. The film might have been better served to have Miss Dripps play final girl, or at least be more involved in the action, as she is the one with the strongest screen presence and most charm. Her character was one of the livelier ones, too, unlike the droll Sam, and is sadly underused. There are also small parts played by legendary Scream Queen, Linnea Quigley and Ari Lehman, who was the first actor to ever play Jason Voorhees (as a boy) in the first Friday The 13th.

I wanted to like this flick a lot more than I did*. It’s heart was in the right place, it knew it’s influences very well and nailed the nostalgia elements pretty much dead on. It had a perfectly fine horror flick story and director Justin M. Seaman has a nice eye for spooky visuals, with the flick looking good for something very low budget. Definitely an “A” for effort. Where the film stumbles, is in it’s writing and editing. The Barn could have been ten minutes shorter, without hurting the story, it’s a little too talky between the action and the dialog itself was very stale and flat. The film wasn’t actually scary and the simple and effective plot gets a little convoluted in it’s second act. Simpler and more streamlined was working earlier on. A very noble effort and we hope filmmaker Justin M. Seaman continues to hone his craft and maybe the next flick will be closer to the home run he was swinging for here. I still recommend horror fans give it a look for the nostalgia of it and simply for the effort put in by some independent filmmakers with a passion…and despite it’s flaws, that passion does show!

*This little flick has grown on me a lot since I first reviewed it. Not sure this statement still applies -MZNJ