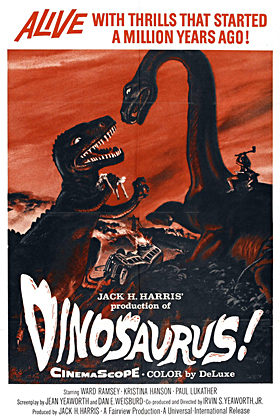 With Jurassic World tearing up box office records, I revisited this childhood favorite and it still is a lot of fun and now with a load of added nostalgic charm. The FX may be cheezy by today’s standards but, they still work on a camp level and the fact that the director and actors approached this with just the right level of seriousness, really made its work.  This was my Jurassic World when I was a little kid and they played it on channel 9 quite frequently…

Story has an American contstruction crew on a remote Caribbean island digging underwater and discovering not only two dinosaurs perfectly preserved by the nearly freezing temperatures of an underwater river, but, a caveman (Greg Martell) as well. When during a fierce storm the carcasses are struck by lightening, we soon have a living breathing Brontosaurus, Tyrannosaurus Rex and cave dude running around the island…we also said goodbye to science during the opening titles. Can heroic construction chief Bart (Ward Ramsey) save the day and get the girl (Kristina Hanson)?

Despite completely pissing on countless scientific facts and theories, this flick is a lot of charming fun as directed with complete seriousness by Irwin Yeaworth (The Blob) from a script by Dan. E. Weisburd and Jean Yeaworth. There are so many 60s movie clichés here that I completely bought into as a kid but, chuckle at now, such as the greedy local (Fred Engelberg), the precocious orphaned kid (Alan Roberts), the funny fat guy (Wayne Treadway) with the cute/insulting nickname and the quintessential bubble headed housewife type (Hanson) who runs from a prehistoric carnivore in heels 55 years before Bryce Dallas Howard. The dinosaurs are cheesy animatronics mixed with some B-level model animation and, of course, our two dinosaurs are going to fight…gotta have a dinosaur fight to make it complete. The film is fast moving and goes from one action set piece to another, after a brief character introduction to all the stereotypes of the era, then we are off for prehistoric fun leading up to our T-Rex vs. steam shovel finale. Scientifically it may be a lot of hooey but, as entertainment this kept me riveted as a kid and gives me plenty to chuckle about now. A lot of fun and has charm these new CGI epics never will.

The cast all perform this with a straight face. Ramsey is the perfect 60s hero with slicked back hair, puffed out chest and little tolerance for the antics of silly women. As such Kristina Hanson is the perfect 60s heroine…pretty, always looks like she came from a salon and is willing to swim in a blasting area to make sure her man gets his lunch. Engelberg is dastardly as the slimy/greedy villain who see dollars signs in our prehistoric guests and is the caretaker of the before mentioned precocious kid. Roberts makes for an annoying and possibly extremely stupid kid who sees no folly in playing house with a caveman…played with some over the top hi-jinx by Greg Martell, who also instills some nobility in the brute.

Not only a favorite from my childhood, but, a very charming, if not extremely silly, rubber monster movie. There is still loads of fun to be had and the cheesy critters add some nostalgic fun to all the 60s stereotypes that populate the film. A perfect Saturday Matinee of nostalgic dinosaur entertainment!