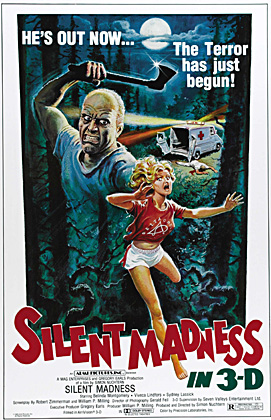 Part of the 80s 3D revival, Silent Madness has an error at a mental hospital releasing psychopathic killer Howard Johns (actor and stuntman Solly Marx) back onto the streets instead of inmate John Howard. Johns returns to the scene of his original slaughter, a college sorority and begins killing again. Pretty Dr. Joan Gilmore (Belinda Montgomery) refuses to be part of the cover-up and heads to the sorority house to stop him. This all occurs conveniently while the girls are leaving on holiday, so no one notices when his victims start to go missing and everyone thinks Gilmore is the crazy one.

Lesser known 80s slasher is directed by Simon Nuchtern from a script by Bob Zimmerman and Bill Milling, who also co-produced with Nuchtern. The result is a very tame slasher with a good deal of it’s kills happening off-screen and those we see, being rather underwhelming. You can count on one hand the times the film throws something at the screen to take advantage of the 3D and one wonders why they even bothered except to take advantage of a current craze. Belinda Montgomery does make for a perky and pretty heroine. She’s both final girl and damsel in distress and, of course, no one believes her that Johns is on the loose, including the lazy town sheriff (Sydney Lassick) and the sorority house mother (Viveca Lindfors). There is little suspense or scares and the ending big reveal isn’t anything we haven’t seen before, as the slasher craze was running out of gas at this point. Even Solly Marx’s silent killer (hence the title?) is kind of dull. Most of the usual 80s slasher tropes are present, so there is that, though not very effectively used by the by-the-numbers direction of Nuchtern. One curiosity is that some of the shots look like they are attempting a Suspiria/Argento look here and there, but even that is handled lamely.

Overall, this was a very pedestrian slasher and one that seemed to be made solely to take advantage of the 3D and slasher crazes of the era. It has the feel of a lazy production and only veterans Belinda Montgomery and Viveca Lindfors put any real effort into their performances. There is very little blood, much less gore and the kills are unimaginative and lame. If you are an 80s completest, it’s worth a look, but definitely a lesser known slasher for good reason. Also stars 80s scream queen Elizabeth Kaitan as a skateboarding babe who winds up one of Johns’ earlier victims.

In 1982, horror masters Stephen King and George A. Romero collaborated on this anthology movie that was inspired by the old horror comics from EC Comics. The film, written by King and directed by Romero, presented five horror-themed stories bookended by a segment about a young boy (Joe King) having his horror comic thrown out by his overbearing father (Tom Atkins). Outside in the garbage can, the pages of the book come to life, opening up and allowing the skeletal “Creep” to present it’s tales. Our first is Father’s Day which tells the story of Nathan Grantham (The Boogens‘ Jon Lormer) a rich curmudgeon murdered by his daughter (Viveca Lindfors). As his children and grandchildren gather for Father’s Day, Nathan comes back from the grave for ghostly revenge. Next is The Lonesome Death Of Jordy Verrill which has King himself playing a country bumpkin who has an unfortunate encounter with a fallen meteorite. This is followed by Something to Tide You Over, a story of infidelity, murder and revenge from beyond the watery grave with Leslie Nielsen and Ted Danson. Then we are treated to The Crate, a tale of an old crate discovered in a university basement and the horrific creature that lives within it. Finally we get They’re Creeping Up On You, a segment about a mean, old, germ-fearing, Howard Hughes-like recluse (E.G. Marshall) with a very nasty bug problem.

Back in the day, those expecting a fright-fest of epic proportions from the collaboration of Romero and King were sadly disappointed by this comic bookish and tongue-in-cheek anthology that focuses on ghoulish humor far more than scares. Creepshow is a lot of  fun, though, especially years later with the added 80s nostalgia, but while there are some chills, it is never really all that scary…and it wasn’t meant to be. The film retains the dark humor of the comics that inspired it and is even filmed as a comic book come to life, with comic style frames and scenes filmed like comic book panels, all with a ghostly animated creeper beginning each segment. First story Father’s Day is fun and spooky and features some nice visuals and make-up effects. The next story, Jordy Verrill, is OK. King can’t really act, but his exaggerated style oddly fits with the story. Despite a bit of a goofy amusement factor, as his nimrod Jordy turns into a form of alien plant-life, the story itself really doesn’t go anywhere or have much of a point. Third story, Something to Tide You Over, is the dullest, with Nielsen’s pontificating villain taking up most of the running time, happily laying out his diabolical plot to his captive audience. Creepshow picks up again for the last two stories which are, by far, the best. The Crate is spooky, gory and really works the dark humor as a beleaguered professor (Hal Holbrook) uses the discovery of a vicious and very hungry creature to rid himself of another monster, his overbearing wife (Adrienne Barbeau). They’re Creeping Up On You is fun and will make your skin crawl as the ruthless and heartless Upson Pratt is trapped in his germ-free apartment by a power outage with an army of invading cockroaches. You get three strong stories, two weak ones and a Halloween set bookend segment that is devious fun, too. So, overall Creepshow is not perfect, but is ghoulish entertainment made even more fun by a healthy dose of 80s nostalgia, brought on by it’s charming hand-drawn animation and live make-up and prosthetics…something sadly missing in today’s movies.

With five stories and a bookending segment, we have a large cast with many horror veterans and each seems to get the tone of the material and have a good over-the-top time with it, in the varying degrees their individual roles call for. Stand outs are…Tom Atkins (The Fog, Halloween III) as the bookending tales’ hard-nosed father. Atkins is no stranger to edgy characters and this time he gets to play a real jerk. Leslie Nielsen oozes malice in his segment and while it is the weakest story, the veteran actor makes a contemptible bad guy. Adrienne Barbeau is deliciously overbearing as the wife of her The Fog co-star Hal Holbrook’s meek professor, Northup. Barbeau really makes you hate her and beg for her comeuppance…call her Billie, everyone does! Last, but certainly not least, is E.G. Marshall who is a delight as the modern day Scrooge, Upson Pratt. Pratt is a ruthless and heartless individual and his skin crawling encounter with an army of cockroaches makes us cheer on the bugs! Also good are Viveca Lindfors, Carrie Nye, Fritz Weaver, Ted Danson and there is a fun cameo from make-up FX master Tom Savini and small roles from future Oscar nominee Ed Harris and Dawn Of The Dead‘s Gaylen Ross.

Overall, I like Creepshow and it’s a lot of fun, especially now that it carries such heavy 80s nostalgia. I will admit I was a little disappointed back in the 80s that it wasn’t a more serious horror, considering who was involved, but it has grown on me considerably. It isn’t completely successful with all it’s stories, but the ones that are, really work and provide some fun and goosebumps to keep us entertained. The large cast gets the material completely and is filled with familiar faces to horror fans. An entertaining comic book style horror that sadly gets forgotten when people discuss comic book style films as it does convey the comic book feeling far better than many a superhero movie. Creepshow was followed by a sub-par sequel in 1987, directed by Michael Gornick and written by Romero, based on some Stephen King short stories. A third flick, without the involvement of Romero or King, was made in 2006 and seemed to go straight to DVD with little or no fanfare.