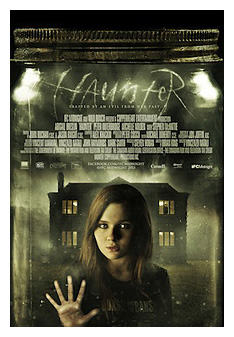 Despite the interesting concept of taking a haunting/possession story and playing it from the ghosts’ point of view, Haunter is actually a bland and dull supernatural thriller with elements of Groundhog Day and The Others mixed in. After the repetitive first act, it seems that director Vincenzo Natali just starts making things up as he goes along in order to stretch the meager story out to a feature length film. Star Abigail Breslin tries very hard to carry the flick on her young shoulders but, the material and direction just isn’t there to support her. An un-spooky mess. Also stars Stephen McHattie as a dark and malevolent spirit.

Horror anthology features three separate stories about three separate patients at a sanitarium presided over by a Dr. Stenson (Malcolm McDowell) who frames the stories. Each story is directed by a different director, yet all fit together in terms of style and when all is said and done, Sanitarium is a fairly well made and entertaining horror. Nothing special but, horror fans could do far worse for an evening of entertainment on the couch. Also stars John Glover, Lacey Chabert, Lou Diamond Phillips and Robert “Freddy Krueger” Englund.