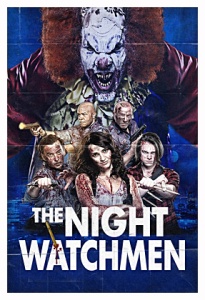 When world famous Blimpo The Clown (Gary Peebles) dies of a mysterious illness in Romania, his body is shipped home and to the wrong building. When his coffin is opened, it’s discovered that he was bitten by a vampire and is now one of the undead himself. Unleashed in the building, he starts to turn the late-working employees into bloodsuckers. Now it’s up to three incompetent night watchmen (Kevin Jiggetts, Ken Arnold and Dan DeLuca), their new rookie (Max Gray Wilbur) and a cute and feisty employee (Kara Luiz) to stop the blood-craving clown and his minions.

Horror/comedy is directed by Mitchell Altieri (who directed The Hamiltons and The Thompsons with his “Butcher Brothers” collaborator Phil Flores) from a script by stars DeLuca and Arnold and Jamie Nash (Exists, Altered). It’s an amusing 80 minutes that may not always hit the mark, but is still goofy fun. There is a lot of blood spattered along with the occasional laughs and the cast do seem like they are having a good time. Sexy, girl-next-door Kara Luiz especially shows an endearing screen presence as the spunky, smart-ass turned vampire slayer, Karen. Would like to see her do more final girl work. Overall, it is an amusing and gory time on the couch and who can pass up vampire clowns? Also features veteran actor James Remar as a creepy boss and cult favorite scream queen Tiffany Shepis as an ill-fated employee.
-MonsterZero NJ

Only Lovers Left Alive may not technically be a horror film, but it’s main characters are vampires, so, it does fall into the category, though it is more of a character study than a thriller. Written and directed by Jim Jarmusch, who is one of the more interesting filmmakers on the indie circuit, the film does deliver a unique and refreshing spin on the tired and overused vampire genre and that alone makes it worth watching for.

The film tells the story of husband and wife Adam (Tom Hiddleston, Loki from the Thor films), a reclusive musician, and scholarly Eve (Tilda Swinton) who are both vampires who have lived for centuries. Adam lives currently in desolate Detroit while Eve lives in exotic Tangier. Both have long given up stalking humans for prey and find other more ‘civilized’ methods of getting their nourishment and have decided instead to pursue a more Bohemian lifestyle, soaking up all the cultural accomplishments of the world that the ‘zombies’…what they refer to normal humans as…take for granted. But when Adam begins to show signs of a moody depression, Eve comes to Detroit to comfort him. Their reunited bliss is short lived, as Eve’s sister Ava (Mia Wasikowska) joins them unexpectedly from L.A. and disrupts their happy bubble of seclusion with her uncontrolled behavior.

I really enjoyed this film and it’s portrayal of two beings who spend their eternal life immersing themselves in the accomplishments of mankind such as literature, science and music, yet avoid being the neutered fops of the Twilight series. Jarmusch creates two fascinating characters who bathe themselves in the accomplishments of a race that generally overlooks them. But these two still retain their lethality and that’s what keeps this so interesting. They are dangerous creatures that choose not to rule at the top of the food chain, but remain aloof using their extended time here to experience and savor what ‘life’ has to offer, though they are themselves the undead. Obviously their little bubble gets burst by Ava, but it is how they adjust that keeps them so interesting and the film involving. The wisdom of the ages as they simply adapt the best they know how. And the director gives it all a subtle and witty sense of humor, as well. I really liked Jarmush’s use of his locations, from the desolate streets of after-dark Detroit to the seedy alleyways of Tangier where there is a drug dealer on every street. There is some sumptuous cinematography by Yorick Le Saux who captures the bleakness of Detroit’s abandoned cityscape and, ironically, the same ‘danger at every corner’ feeling of Tangier’s labyrinthian alleyways. The two vastly different locations are given a similar look to illustrate these creatures of the night’s choice to live in the shadows even in an exotic country like Morroco. Add to that a haunting score by Jozef van Wissem and you get a film dripping with atmosphere to go along with the engrossing and endearing characters.

And what really makes this film so involving, and Jarmusch’s script sizzle, are two truly wonderful characterizations/performances from his lead cast. Tilda Swinton and Tom Hiddleston are mesmerizing as the couple married for over a century and who have been in the presence of the likes of Mary Shelley and Nikola Tesla and recollect fondly of these giants as if reminiscing about an old friend or favorite school teacher. Hiddleston gives us a reclusive musician and rock star who is known for his work, but remains an enigma to the world, a musical outlaw that is part Keith Richards and part Howard Hughes. He gives his character the air of a moody genius who never really appreciates his own accomplishments and has a fetish for old guitars. Swinton is the more upbeat and livelier Eve, who unlike her brooding, sometimes distant husband, revels in the culture of what surrounds her. She still enjoys life, despite having lived so much of it and wants Adam to share in her continued enthusiasm. The love between these two seems genuine as brought to life by the actors and they have great chemistry together. Supporting cast are also very good as Wasikowska gives us the untamed, wild-child Ava, who is stuck by way of her immortality in the eternal rebelliousness of youth and there is no malice when she turns their peaceful existence upside-down with her unchecked behavior. Rounding out is a good turn by Anton Yelchin as Ian, a musician and human friend of Adam’s who gets him his guitars and whatever he needs, as the wealthy Adam pays well, and John Hurt as Eve’s mentor Marlowe.

This is not a film for everyone, especially those expecting the traditional bared fangs, spilling blood and wooden stakes. This is a really interesting character study of two fascinating, passionate individuals who happen to be vampires. There seems to be an underlying commentary about how the human race doesn’t appreciate it’s cultural, creative and scientific accomplishments and spoils everything it has, including it’s own life’s blood with sickness and disease…something our vampires must be careful to avoid. Overall, I found this an interesting, engrossing, original and sometimes ironically funny vampire film from a filmmaker that has staked out his career on being original…pun intended!