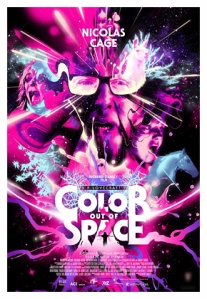 Flick is based on H.P. Lovecraft’s The Colour Out of Space and takes place in a secluded house in rural Arkham, Massachusetts. The home is occupied by the Gardner family, father Nathan (Nicolas Cage), mom Theresa (Joely Richardson), Wiccan teen daughter, Lavinia (Madeleine Arthur), teen son, Benny (Brendan Meyer) and young Jack ( Julian Hilliard). What appears to be a meteorite lands on the eccentric family’s property one night, emitting a purple glow and having a strange effect on all of them. Two days later, and after being struck by lightening, the meteor seems to have vanished, but strange things begin to occur. The object is not gone, however, but has found it’s way into the family well and water and begins to change the animal life around them…and begins to change the Gardeners as well.

Creepy flick is directed by South African director Richard Stanley who is most famous for being the first director on the disastrous 1996 The Island of Dr. Moreau remake and for the apocalyptic, music video-esque Hardware. Color has some very bizarre and surreal sequences, some very unsettling prosthetic creatures and make-up, and Nicolas Cage being…well, Nicolas Cage. The SPFX are quite good and the flick does play a bit like John Carpenter’s The Thing, but with alpacas, which isn’t a bad thing. The movie does start out slowly, giving us a chance to get to know this already strange family, but once it gets going, it’s quite spooky and sometimes borders on hallucinogenic. It’s not perfect, Cage’s over-the-top gets obtrusive at times and the family seems a little too weird, even before the alien entity shows up. It makes their personality transformations less startling as they are already an odd bunch. H.P. Lovecraft doesn’t seem to be the easiest author to adapt and being unfamiliar with this tale it’s hard to say just how good a job they did. Taken as it is, it’s a trippy, creepy and effective enough movie and Stanley proves he hasn’t lost his visual flare, either. Worth a look! Flick also features Tommy Chong as…surprise!…a stoner squatting on the Gardener land. 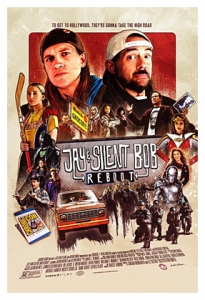