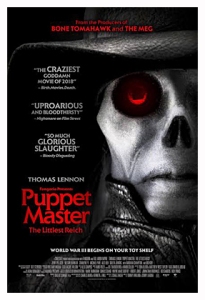 After a brief opening that takes place in the 80s, the film jumps to present day where there is a convention being held to commemorate the Toulon puppet murders from three decades previous. There are going to be some replica puppets given away and a tour of Toulon’s mansion. Comic artist Edgar (Thomas Lennon) and his hot girlfriend Ashley (Jenny Pellicer) are there to attend and soon find the puppets present are the real thing and Toulon (Udo Kier) is not done with his reign of terror, even from beyond the grave.

Reboot is directed by Sonny Laguna and Tommy Wiklund who gave us the derivative but entertaining Blood Runs Cold and Wither. They direct from a script by S. Craig Zahler based on the characters created by Charles Band and Kenneth J. Hall. One would probably have to be a fan of the original series to appreciate this dull reboot. If not, it’s just a series of gruesome murders of various puppet fodder characters, that has only some well executed practical gore effects to hold one’s interest. It’s just a random series of killings with no real plot other than to see toys kill people leading up to a Sharknado-esque finale. The tone of the flick goes from silly to trying to take itself seriously and if puppets, blood and boobs are all you came for, than it does at least deliver that…though still lacks the goofy charm of the original movie. Also stars genre favorites Barbara Crampton, Michael Paré and Matthias Hues.