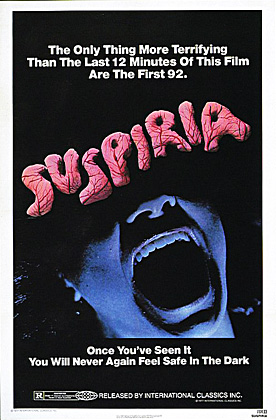 I’m going to be completely honest here and I know many will disagree with me, but I am not a big fan of Dario Argento. I find his flicks to be more silly than scary and he hasn’t made a movie worth watching since the 80s. His earlier works, however, are spooky and stylish and the guy sure knew how to frame a shot in those days. His early works, such as his most famous, Suspiria, are dripping with atmosphere and the soundtrack from this 1977 Italian classic is one of horror’s best, courtesy of Goblin. So, while Argento is not a favorite of mine and neither are his films, Suspiria is spooky, gory and atmospheric enough to be a perfect fit for the Holloween season and thus does find it’s way onto the playlist, especially on a cloudy, gloomy day like today. So…it finds itself played every year at this time and thus earns a spot on the Halloween Favorites list despite not truly being a personal favorite of mine. Ah… the magic of Halloween.

Suspiria is really very simple in terms of plot. It’s somewhat eccentric story finds a young American women, Suzy Bannion (Jessica Harper) traveling to attend a dance academy in Germany, but finding herself surrounded by some strange events and occurrences almost at the moment of her arrival. As Suzy begins to look into the strange goings on, the bodies keep bloodily piling up. The pretty young woman comes to believe the school is run by a coven of witches and she may be their next victim. The film is the first in Argento’s 3 Mothers trilogy followed by Inferno in 1980 and then almost 30 years later with The Mother Of Tears in 2007… which was pretty awful, in my opinion.

Again, I find this flick more silly than scary, but even I can’t deny it’s loaded with spooky atmosphere and the cinematography by Luciano Tovoli is absolutely sumptuous and adds lots and lots of spooky atmosphere. Film is written by Argento and Daria Nicolidi and is based on a series of essays by Thomas De Quincey called Suspiria de Profundis. Argento certainly creates a beautiful canvas and he also has a disturbing talent for setting up some inventive and gruesome kills. But otherwise, the film itself is rather silly with weak dialog and no real suspense or scares until the admit-tingly spooky last act when Suzy finally meets the witches in question in their lair hidden within the school. Obviously, the score by Goblin adds a lot, too, as it is one of the best scores in horror film history and is certainly quite effective in administering goosebumps all on it’s own. So, overall the film works far better than it should due to it’s creepy packaging far exceeding the power of it’s somewhat weak story and screenplay…but something tells me the actual scripted page was not Argento’s top priority anyway here. He always seemed to be more about style than substance.

As for the acting, the cast…star Jessica Harper included…seem to wander through the film looking lost and confused. They recite the weak dialogue very woodenly and the unnatural effect a lot of the stiff acting gives the proceedings actually works in the film’s favor, somewhat, as it is a supernatural tale after all. The dubbing doesn’t help either, but the film appears to have been filmed in english with everything dubbed in later as were a lot of Italian films back then.

So, this film is considered a classic by many and I recognize that and respect it’s place in horror history despite my not being all that endeared to it. I do agree that when you combine Argento’s visual eye with his skill for creating disturbing and bloody kills along with it’s classic score by goblin, the film certainly makes for a fun Halloween season watch even if it is not a favorite. Personally I have always preferred Fulci, but understand why Argento has his fans…at least when it comes to his earlier films. 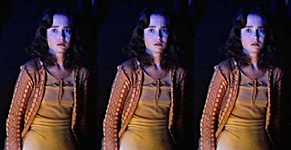