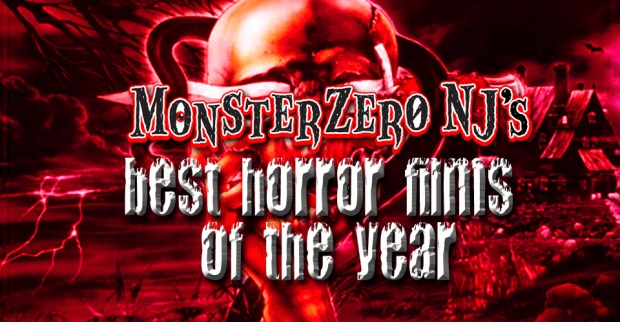 It’s time to look back at the past year and see what horrors left an impression. M. Night Shyamalan made a return to form, Jordan Peele made an impressive feature debut and Chucky proved he is still a horror icon to reckon with! Without further ado, here are my favorite/best horrors of 2017.

(NOTE: There are a few titles here initially released in 2016 at festivals or limited theatrical release, but I did not catch up to them till VOD or home media in 2017 and felt it unfair not to include them! Blackcoat’s Daughter, for instance, was made in 2015 and did not see release until this year! -MZNJ)

(To get to our reviews of these titles use the search engine at the top of the page!)

The Void is not only a trippy tribute to horror films of the 80s and the practical make-up and gore effects used in them, but a bloody good time and a creepy monster flick in it’s own right. The film opens with a young couple being chased by two men, with the man (Evan Stern) barely escaping and the woman being shot and then brutally burned alive. The man is found by local policeman, Dan (Aaron Poole) and brought to a nearby hospital that is in the process of closing down after a recent fire. There the cop and minimal staff and patients find the building soon surrounded by mysterious and lethal hooded figures, while inside it starts to turn into a house of horrors, as staff murder patients and the dead return to life transformed into creatures from out of a nightmare. Can Dan, his nurse wife Allison (Kathleen Munroe) and the remaining survivors figure out what is happening and how to get out alive?

Written and directed by the team of Steven Kostanski and Jeremy Gillespie, this is a mash-up/homage to the films of John Carpenter and Stuart Gordon, among others. There are elements of Assault On Precinct 13, The Thing, In the Mouth Of Madness, as well as Re-animator, From Beyond and a host of other cult classics. But Kostanski and Gillespie make it their own with their tale of other dimensions and nightmarish activities and the film is filled with some really unsettling imagery and a host of practical creatures and gore, along with it. The story itself is a bit convoluted at times and the filmmakers don’t spoon feed you everything, but that works far more in the film’s favor than it doesn’t. It’s a disturbing ride, loaded with atmosphere and we do gradually find out enough of what’s going on to satisfy, as the deliberately moderate pace carries us to an unsettling conclusion right out of Fulci’s The Beyond. Sure the acting is a bit wooden here and there and the FX are a bit rubbery, but it’s the charm of what the filmmakers are trying to do and of the many cult classics they evoke, that makes it so enjoyable and fun. Not to mention the filmmakers do conjure some of their own goosebumps along the way. It may not make total sense, but it is enjoyably creepy and when the gore hits the fan, it hits delightfully hard and spatters everywhere. There is some effective cinematography by Samy Inayeh and a cool soundtrack by Blitz//Berlin, who did the soundtrack for Extraterrestrial.

I enjoyed this love letter to many a classic 80s film, including Galaxy Of Terror…which I just re-watched…yet one that didn’t loose it’s own identity. It’s a weird flick that is part Lovecraft, part Carpenter with a few other pinches of famous names of horror thrown in. It has some effectively designed creatures and some delightfully gory moments and gives us some spooky visuals along with the thrills and chills. You may scratch your head a bit here and there, but it’s fun throwback that may have introduced us to two filmmakers to keep an eye on. Also stars Art (Black Christmas, The Brood) Hindle as a state trooper and Scott Pilgrim’s Ellen Wong as an intern in over her adorable head.

3 scalpels, because I didn’t want to spoil any of the weirdness.