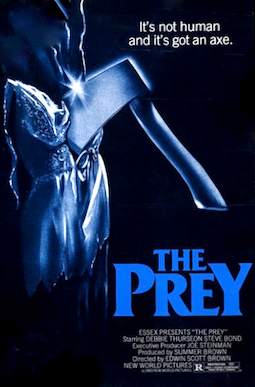 Routine slasher finds a group of young people camping deep in the Rocky Mountains. Of course there is a deranged maniac roaming the woods, a disfigured survivor from a forest fire three decades earlier. Soon the campers are being picked off one by one, murdered in horrible ways. Will any of them survive?

Film is directed by adult film director Edwin Scott Brown, from a script he wrote along with his wife, Summer Brown. It’s directed fairly by-the-numbers, moderately paced and offers nothing new to the genre. The film follows the slasher formula very closely with a tragic backstory for our killer and plenty of attractive young victims for him to kill. There is some decent gore, the traditional nudity and sexual hi-jinx, and the Colorado locations do look very nice. There is little suspense, but at only 80 minutes long it doesn’t overstay it’s welcome. The killer is kept mostly off camera, but the burn make-up does it’s job in the few shots we get when finally revealed. It all leads up to a climax that actually is a bit disturbing and an effective end to a fairly forgettable slasher.

The good looking cast are adequate for this kind of slasher. Debbie Thureson makes a sweet heroine and the imposing killer is played by none other than seven foot tall TV and movie veteran Carel Struycken, who is most famous for playing Lurch in the 90s Addams Family movies. Ironically, Jackie Coogan, who played Uncle Fester in the original 60s Addams Family TV series, also stars in this, his final film role, as a forest ranger. The rest all play killer fodder and do so adequately enough.