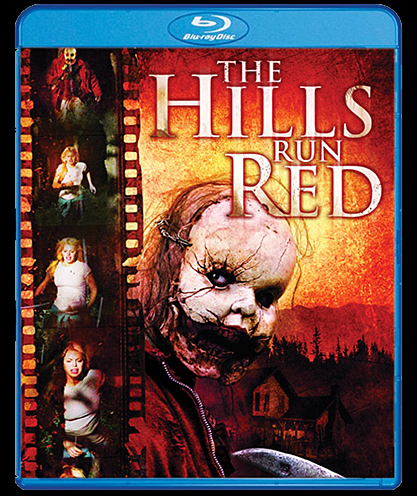 The Hills Run Red (2009) (full review HERE) is a bloody…and very 80s…slasher flick that was sadly overlooked when first released directly to DVD on 9/29/2009. It has since gained a strong and loyal cult following and now, thanks to the great folks at Scream Factory, is getting the treatment and respect it deserves!

The high definition transfer of this cult favorite looks really good and wonderfully complements Ilan Rosenberg’s cinematography, as well as, the film’s unsettling visual design. The flick is presented in the original 2.39:1 aspect ratio. The colors are bright and vibrant and the images are sharp. The sound is in DTS HD 5.1 and should satisfy any home theater enthusiasts, as well as, it’s intended audience. 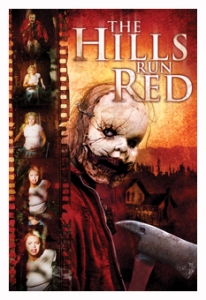 There are some very extensive and informative extras on this disc! The special edition contains all the extras from the original DVD release, including the audio commentary and the It’s Not Real Until You Shoot It: MakingThe Hills Run Red feature.

The new stuff is bountiful. We get two new audio commentaries featuring director Dave Parker, podcaster Patrick Bromley and fan favorite filmmakers Joe Lynch and Adam Green. We get a bunch of video interviews. They start off with an in-depth look at the creation of it’s score from composer Frederik Wiedmann. We get extensive interviews with executive producer Erik Olsen, director Dave Parker and writer David J. Schow. These interviews give some great insight into the production, especially detailing Warner Brothers enthusiastically green-lighting the film after reading the script, then backtracking once they saw the first cut. This explains the short runtime and why the film was dumped unceremoniously on DVD. We get a day in the shooting of the film with, Friday the 13th, June 2008. We get a look at improve scenes shot by the cast for the character filmed segments in The Hills Are Alive…With The Sound Of Improv. The next batch of new featurettes appear to be put together from unreleased interview and behind the scenes footage during the production. These include separate documentaries each on William Sadler’s portrayal of Wilson Wyler Concannon, as well as, Janet Montgomery, Sophie Monk, Alex Wyndham and Tad Hilgenbrink playing their respective roles. After the cast, there are on-set interviews with producer Robert Meyer Burnett and production designer Antonello Rubino. Also be aware, there is a lot of unused footage from the film peppered throughout all these featurettes and a nice production scrapbook that is the icing on the new extras cake. All in all, this is a whooping selection of extras to delight the film’s fans that make this modestly priced special edition well worth the purchase.

Babyface! The masked killer of The Hills Run Red and of the lost film of the same name.

The Hills Run Red (2009) may not have gotten the attention or box office release it deserved, but the folks at Scream Factory have finally given this fan favorite slasher the respect it’s due. The film looks great and there are some very extensive and informative extras involving many facets of the film’s production. If you are a fan of this film, this disc is almost certainly what you have been waiting for!

While I watch dozens of horror films during the month of October…these are a mix of classic favorites and recent horrors that I feel are especially perfect to watch during the Halloween season! 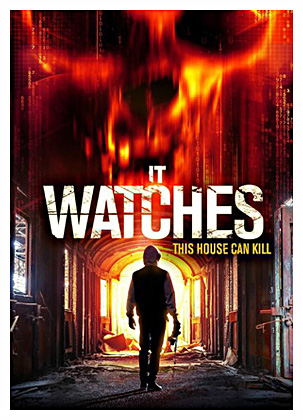 Flick is the latest full length feature from Dave Parker who directed the criminally underrated The Hills Run Red and the Sweet Tooth segment from last year’s Tales Of Halloween. The film tells the tale of Andre (Ivan Djurovic who also co-wrote) who has been in a car accident recently and suffered a concussion that has resulted in short term memory loss. He is asked to take over house sitting duties from a friend and soon after entering the odd house, begins to experience strange things. Andre can’t decide if there is something going on, or is it the paranoia his doctors warned him might occur. But unknown to Andre, there are cameras hidden all over the house and someone is watching his every move…but why?

Parker and his star and co-writer craft an interesting tale of a man unsure of if what he is experiencing is real or the result of a suffered head drama. Realistically you might think one would not ask a man in Andre’s condition to house sit, though things do work out to make sense, when all is said and done. There is some tension as Andre starts to get spooked, his girlfriend just up and disappears and a creepy neighbor shows up to add to the young man’s paranoia. Parker builds some nice atmosphere here in this unsettling house and keeps us curious along with our leading man as he begins to investigate his temporary dwelling. He also lets the audience know someone is indeed in the house with Andre, but keeps his lead character unsuspecting so we are on edge as Andre searches the house with this mysterious watcher lurking in the shadows. Writer and director provide an interesting reveal in our last act that, also comes with some disturbing imagery. It might not have been hard to guess where this flick was heading, but it still worked well enough.

For the most part this is a one man show and Ivan Djurovic is fine in the part of Andre. He could have used a bit more range, but is adequate enough to serve the story. His performance is a bit by-the-numbers, but the added plot caveat of having head trauma does help the actor out a bit, as Andre’s uneven tone is not totally out of place. There is also Rick Irwin as his friend Robert who hands the housesitting gig over to him, Sanny van Heteren as girlfriend Rachel and James Duval as the mysterious and odd neighbor that shows up and spooks Andre. My only complaint about this neighbor character is that the big reveal leads one to question why he was behaving so strangely in the first place.

I liked this small flick. It’s not as good as The Hills Run Red, but it is chilling at times and entertaining and Parker shows he is a director that the horror genre needs to see more of. The film has it’s flaws and the acting may not be as solid as it could have been, but it works well enough even if the final moments take us somewhere not totally unexpected. A worthwhile chiller for a night on the couch.

While I watch dozens of horror films during the month of October…these are a mix of classic favorites and recent horrors that I feel are especially perfect to watch during the Halloween season!