Pretty petty thief Julia (Maika Monroe) finds herself kidnapped and held prisoner by a man named Alex (Ed Skrein) who is conducting sinister experiments in his secluded computerized home. All she needs to do to escape is somehow befriend and outwit his complex artificial intelligence, Tau (voiced by Gary Oldman). That’s kind of it!

Netflix debuted film is directed by Federico D’Alessandro from a script by Noga Landau and is a silly and far-fetched movie that evokes other films like 1977’s Demon Seed for one. The script is sloppy and one wonders why a genius like Alex can’t figure out how to effectively restrain Julia, who is always escaping confines and causing havoc. It has some amusing sequences and some shockingly graphic violence, but is just too weakly scripted to make effective use out of it’s scenario. We should have been far more scared for Julia, but Alex is a lame villain and Tau becomes charmed by her far too quickly for us to feel she’s in peril for too long. Producer/lead Monroe is a feisty heroine, though sometimes we feel her heroics are handed to her a bit too easily by script conveniences. On the other hand, if you have a foot fetish, bondage fetish, Maika Monroe fetish, or all of the above, this may be your Gone With The Wind. Currently streaming on Netflix. 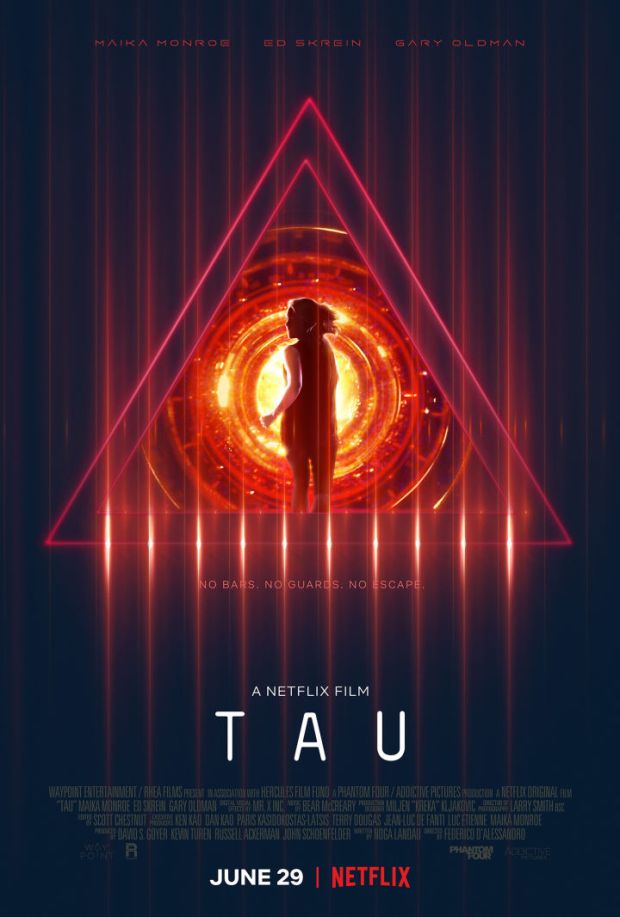 It Follows star Maika Monroe returns to our favorite genre in the Netflix sci-fi/horror thriller Tau. Monroe plays a young woman kidnapped by a scientist (Ed Skrein) to be used in experiments to test an A.I. (voiced by Gary Oldman) of his own creation. The film premieres June 29th! Check out some stills (from Maikamonroe.us) and the trailer…