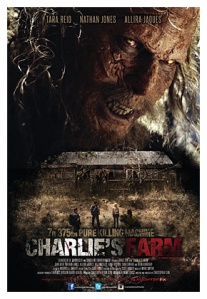 If writer/director Chris Sun’s Boar was a homage to the nature run amok horrors inspired by Jaws than Charlie’s Farm is the Australian filmmaker’s nod to Texas Chainsaw Massacre and that which it inspired. Flick has four friends (Tara Reid, Allira Jaques, Dean Kirkright and Sam Coward) heading into rural country to find the supposedly haunted “Charlie’s Farm”. Local legends say that in the 1980s area townsfolk brought lethal justice to the murderous, cannibalistic Wilson family…all but their young, deranged son Charlie. Now he is said to “haunt” the area surrounding the farm, dispatching anyone who dares venture near. The four friends unfortunately find out there is some truth behind urban legends.

Flick is not perfect, but is a fun throwback/homage with former WWE Superstar Nathan Jones making an imposing Charlie along with some very gruesome kills. As Chris Sun is paying homage to flicks of this kind, don’t expect anything too original, but he seems to know his influences well enough. The rest of the cast are fine here with standouts being Sam Coward as fun, lovable lug “Donkey” and pretty Aussie Allira Jaques as spunky Melanie, who IMO would have been a better final girl than the by-the-numbers Reid. The violence can be brutal and while it isn’t much in the suspense department, the farm setting is creepy and effective and it doesn’t overstay it’s welcome at only 88 minutes. Film also stars horror legends Bill Mosley, who is channeling “Otis” in flashbacks as cannibal patriarch John WIlson and Kane Hodder, as a friend who comes looking for the ill-fated campers and finds trouble himself. An amusing enough slasher. 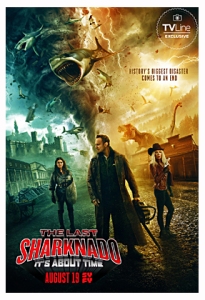 Supposed last installment of this popular Asylum/SYFY series finds hero Fin (Ian Ziering) traveling back in time to destroy the first Sharknado and thus ending them for good. This leads Fin, April (Tara Reid), Nova (Cassie Scerbo) and a host of guest appearances and return characters battling Sharknados through a variety of time periods.

Franchise director Anthony C. Ferrante returns to helm this final chapter though the script is from Scotty Mullen, without series writer Thunder Levin. It’s still about as ridiculous as one would expect from a series that has prided itself on being as ridiculous as possible. To criticize it for it’s absurdity would be absurd in itself as, at this point, you should know what you’re getting into. Taken for what it is, it’s a fun ride through time and and the cast still find a way to keep a straight face while the CGI FX seem to actually be getting worse. It is a fitting finale to a series that continually upped the lunacy ante, while at the same time also knows when to call it quits. Now that Fin has put down his chainsaw, hopefully we get a Nova (Cassie Scerbo) spin-off! 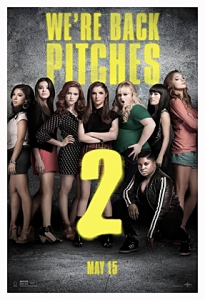 The original Pitch Perfect was a pleasantly surprising diversion with a sassy, sarcastic attitude, likable characters and energetic musical numbers, as directed by Jason Moore. The sequel, again written by Kay Cannon, is now directed by star Elizabeth Banks in her directorial debut and it shows. The movie is just short of an outright mess. The story takes place three years later and The Barden Bellas have ruled collegiate A Cappella all this time, even getting to perform for The President. It’s at that performance that they fall from grace, as Fat Amy’s (Rebel Wilson) wardrobe malfunction causes them to become a national embarrassment and they are removed from collegiate competition. Somehow, though, they can restore their reputation and standing, if they can take the international title away from German uber group Das Sound Machine. Unfortunately, the film wastes two thirds on a bunch of subplots, none of which lead to the main story, such as Beca’s (Anna Kendrick) interning at a record label and a new recruit’s (Hailee Steinfeld) quest to sing her own material. It takes up most of the film with these subplots amounting to not much and it’s only in the last 15 minutes where we get back to the plot and then that’s over with two quick and unimpressive musical numbers…and to a predictable conclusion. Gone is the sassy wit of the first film, replaced by numerous and unfunny vulgar bits with the editing giving the film a very choppy and all-over-the-place feel. Beca and Jesse (Skylar Astin), whose romantic story was one of the cuter aspects of the last movie, are separated for almost the entire film and instead we get Fat Amy’s boring attempts to woo a reluctant Bumper Allen (Adam Devine). Add to that, an overall lack of energy and creativeness to the film’s music numbers and you have a very disappointing sequel to a very surprisingly charming movie. 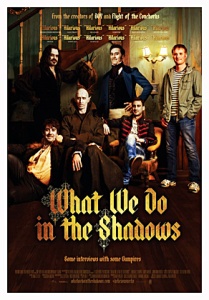 Fun found footage comedy tells the story of a documentary being made about a group of vampire roommates, Viago (Taika Waititi), Deacon (Jonathan Brugh), Vladislav (Jemaine Clement) and ancient Petyr (Ben Fransham), who live in a flat in Wellington, New Zealand. While they eagerly await the much revered event, The Unholy Masquerade, their world is thrown asunder when Petyr creates a new vampire, Nick (Cori Gonzalez-Macuer) who refuses to play by the rules. Not every joke or bit works in this New Zealand horror comedy, but there are some very funny moments and a lot of very clever uses of the time-honored vampire tropes. Co-written and co-directed by stars Jemaine Clement and Taika Waititi, the two have a lot of fun sending up all kinds of vampire films and Real World style reality shows by cleverly combining the two. They play it straight but not without continually winking at the audience and while it never gets laugh-out-loud funny, there are plenty of giggles to be had, as well as, some amusingly gruesome moments, too. A fun vampire flick/reality show mash-up. 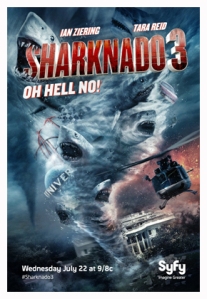 Director Anthony C. Ferrante and writer Thunder Levin return for a third entry in this delightfully off-the-charts series. This entry opens with Fin (Ian Ziering) receiving a medal of honor from and then saving the president as another sharknado hits Washington, D.C. Fin discovers there are more shark storms forming and they are poised to combine into a massive sharkicane. With friend Nova (Cassie Scerbo) returning to his side as a shark killing battle-babe, Fin races to Orlando, Florida to save his wife and daughter (Tara Reid, Ryan Newman) from the greatest Sharknado of them all! Third flick is filled with all the lunacy one might expect at this point with as many cameos from media personalities as there are sharks. The action is the usual over-the-top fun, but what makes this one standout a bit, is a scene stealing Cassie Scerbo as the waitress turned bad-ass shark killer, Nova. Not only is she decked out in black leather, but comes with an armored RV/”Bat Cave” from which she conducts her fish kills. The sassy Scerbo is a blast to watch and it’s time for the character to branch off in her own series of flicks, instead of remaining a sidekick. Overall, this is silly fun and maintains an exuberance for it’s ridiculousness. Also stars David Hasselhoff as Fin’s astronaut dad…can you say sharks in space? 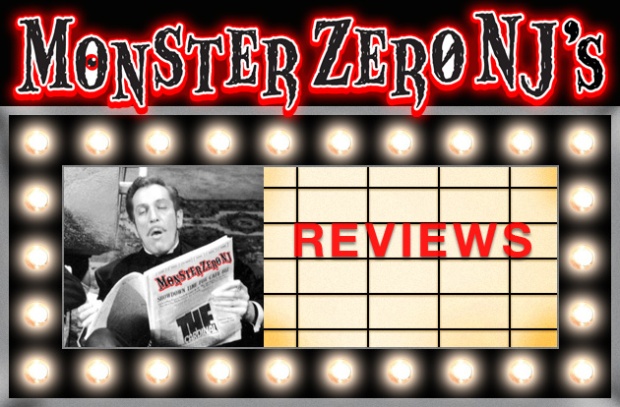 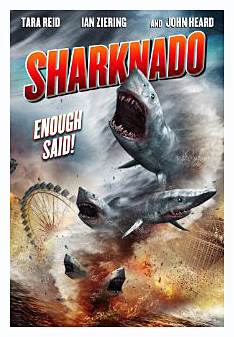 I finally caught up with this much hyped Asylum/SYFY channel thriller and have to say while it didn’t quite live up to the hype…very little ever does…I did have a good time at it’s sheer audacity to ignore all rational thinking and scientific fact and just ‘go for it’! Sharknado is ridiculous and knows it…revels in it…and that’s where the fun comes from as the movie could care less about logic, plot, science or even basic story structure, it wants to throw sharks at Los Angeles and it’s human inhabitants and does so gleefully and gorily for almost 90 minutes.

The thread bare plot involves a freak hurricane and the tornadoes it is creating advancing up the West Coast, sucking sharks out of the water and depositing them, like an enormous sea life filled confetti cannon, all over a flooded coastal L.A. Enter bar owner, surfer and divorced dad ‘Fin’ Shepard (Ian Ziering)…yes, Sharknado’s hero is named ‘Fin’… who, when the storm hits, decides to risk all and rescue his estranged family from this ‘Jaws‘ dropping storm. Along with him are Austrailian bud, Baz (Jaason Simmons), bar regular George (John Heard) and smoking hot bar maid, Nova (a scene stealing Cassie Scerbo) who has a crush on Fin and a vendetta against sharks. Through hell and high shark infested water, Fin and co. reach…well, some of them reach…Fin’s ex-wife (Tara Reid) and daughter (Aubrey Peeples) and now must rescue his son Matt (Chuck Hittinger) from flight school while evading schools of sharks in flight. Can Fin reunite his family and figure out a way to stop great whites from falling on his head?

Directed by Anthony Ferrante (Boo, Hansel And Gretel) and written by someone named Thunder Levin, Sharknado is silly, gory fun. It’s not quite the delirious good time as Alexandre Aja’s bloody remake Piranha 3D or even Corman’s original Piranha are, two films similar in plot and tone, but it has a lot of spunk and and isn’t afraid to be as ridiculous as it needs to be to entertain it’s audience. Since Boo, I have always felt Ferrante had the potential to be a really good director and while this film is ridiculous and outrageous, Ferrante always seems to be in control. There is always a method to the madness and no matter how silly it gets, it’s on purpose. He stages the action fairly well for a low budget disaster flick, even when the action involves flying carnivorous fish.

He gets the right tone of performance out of his cast. Everyone takes their roles seriously no matter how silly their lines or preposterous the scenes they are in get. Keeping a straight face while battling a shark in someone’s living room takes skill. Ziering actually makes a decent hero, Tara Reid is…Tara Reid, Simmons is lively as Baz and Heard seems to be having a good time as the inebriated George. But it is Cassie Scerbo who steals the flick as the beach bunny with a shotgun, the shark hating Nova. She is feisty as she is pretty and not only does she handle the action well, but delivers some of the film’s more ridiculous lines with a completely straight face. Her character is involved in some of the more ridiculous action scenes, too and Scerbo dives right in, denim shorts and all. Curious to see how she’d be in a far more serious horror flick.

So, over all, Sharknado is a good time. It’s not great; not all the bits work; some of the plot conveniences just elicit groans and the cheesy CGI doesn’t have the same charm as Corman’s plastic fish or even Spielberg’s mechanical Bruce, but it’s heart is in the right place and any movie that so proudly dives feet first into ridiculousness of this level to entertain you, deserves to be given the credit it’s due. Silly, ridiculous, but as much fun as you can expect from a tornado full of sharks.