Loving wife and mother RIley North (Jennifer Garner) watches in horror when she sees her husband (Jeff Hephner) and daughter (Cailey Fleming) gunned down by members of a drug cartel on her daughter’s birthday. After a failed attempt to bring the thugs to justice, Riley disappears. Five years later, members of the cartel start dying and it seems Riley North has transformed into an avenging angel and revenge is exactly what she is back for!

Film is directed very by-the-numbers by Pierre Morel from an extremely lazy script by Chad St. John. Lazy because the most important aspects of the story, such as Riley’s transformation from mom to vigilante and even the killing of the three men actually responsible for her husband and daughter’s deaths, occur off-screen. We jump five years after the ineffective trial to RIley’s war on the cartel in midstream. All we get is some FBI babble about her spending time in Europe and Asia and being a cage fighter to a gun store theft with Riley taking some very specific weaponry. Riley is now wiping out cartel members like a widowed Rambo and becoming a folk hero on the mean streets in the process. Where did she acquire her arms training? Her knowledge of guns and ammo? She’s outmaneuvering and mowing down men who have spent their entire lives with guns and in gangs. When we last saw Riley she was a banker. What really happened to her in those five years aside from what little we are told? That’s what’s important to give the story some needed substance, but St. John’s script gives us scraps and more clichés than Riley delivers bullets. Even an 80s style training montage would have supplied more information. At least Garner is very effective as Riley and it’s too bad her soulful anti-heroine isn’t in a much better movie that the actress’ work deserves. 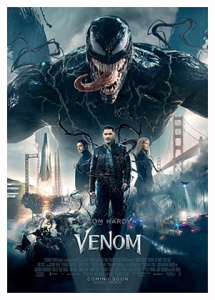 Comic book based flick finds intrepid reporter Eddie Brock (Tom Hardy) investigating the Life Foundation and it’s CEO Carlton Drake (Riz Ahmed), who unbeknownst to Eddie has just retrieved some symbiotic organisms from space. Eddie gets infected by one of those organisms when sneaking into the foundation headquarters and now he and the alien creature become one as the anti-hero Venom! Can they stop Drake, who has acquired his own sinister symbiote and plans to help them invade the Earth?

Film is directed well enough by Ruben Fleischer (Zombieland), but from a mess of a script by Jeff Pinker, Scott Rosenberg and Kelly Marcel. What story there is, is all over the place and the tone of the film goes back and forth from serious Sci-fi thriller to absurd comedy, sometimes in the same scene. Hardy can be a hoot at times, though, with an eccentric performance and the relationship between he and Venom can be amusing. There are a few decent action sequences, but the human villains are boring and Venom and his adversary Riot are obvious cheesy CGI creations and have no real weight or presence. Overall it’s a silly film, with sub-standard SPFX and is possibly the worst Marvel flick since the equally messy and tonally challenged Iron Man 3. You’d think with the success of the R-rated Deadpool, they’d have gone for something a lot edgier considering the subject matter.
A schizophrenic and forgettable first solo venture for the Spider-Man villain turned anti-hero, though box office returns will probably earn it the sequel the mid-credits scene sets up. Also stars Michelle Williams as Brock’s long suffering girlfriend Anne and a cameo from Woody Harrelson as a familiar face from the Venom comics. 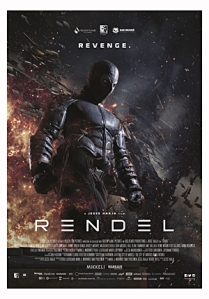 Rendel is a Finnish film about mild-mannered family man, Rämö (Kris Gummerus) who after going to work for the wrong people and seeing the wrong information, finds his family murdered and he left for dead. Now Rämö transforms into the masked vigilante Rendel, who sets himself on a path of bloody revenge against crime boss, Mr. Erola (Matti Onnismaa) and his cruel son, Rotikka (Rami Rusinen).

Jesse Haaja’s film tries to carry a Batman-ish superhero vibe, but it’s hard to view Rendel as an outright “hero” when his revenge is so brutal, bloody and deadly. He is more leather clad Michael Myers than Bruce Wayne. Nobel as his reasons may be, he is more straight-up vigilante even with the mask, which is permanently attached to his face…begging the question how does he eat, drink or breathe. There are some intense and bloody fight scenes and Tero Saikkonen’s cinematography does make a modestly budgeted film look very good. Running Rämö’s story-line alongside Rendel’s revenge story-line is a bit distracting till an hour in and we find we are seeing Rendel’s origin and not a sub-plot, but, once that is clear, it works in retrospect. It also works having one of Rendel’s daughter’s favorite characters of folk-lore acting as a second personality/guide inside his head. It was a nice and original touch. Aside from a throwaway line about a possible military background, it is also curious that the mild-mannered Rämö has become such a skilled fighter as Rendel, but it is a comic book style movie after all. Director/writer Haaja has given the film some nice atmosphere, has a solid visual style and the fight scenes and filmmaker’s effort do make it worth a watch. Also stars Wyrmwood’s Bianca Bradey as sexy, bad-ass killer, Stacey and is titled Rendel: Dark Vengeance here in the U.S.