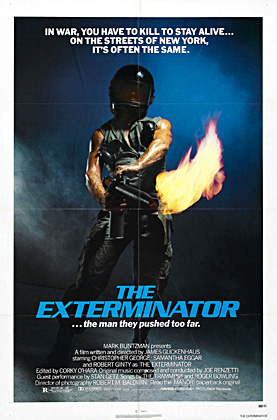 James (Shakedown) Glickenhaus’ The Exterminator is a grind house flick through and through with it’s dirty, grimy depiction of a crime-riddled New York City and the cruel and blood-spattered activities of it’s criminal underworld and corrupt officials. The film focuses on Viet Nam vet John Eastland (Robert Ginty) and his friend Michael Jefferson (Steve James) who saved his life in the brutal opening sequence set during the war. When the two best friend cross paths with The Ghetto Ghouls, a vicious street gang, the vengeful youths attack Jefferson and paralyze him for life. This sets Eastland off on a bloody quest for revenge which starts at the Ghetto Ghoul’s hang-out and soon spreads out onto the streets of New York City itself as Eastland decides to become a one man war against crime, who proclaims himself to the people of the city as “The Exterminator.” With guns, flame throwers and even meat grinders at his disposal, The Exterminator is out to clean up the streets…but he’s got the attention of a hard-boiled cop (Christopher George) and made enemies even he may not be able to survive.

Written and directed by Glickenhaus, this is a sleazy and nasty little film that isn’t afraid to go deep into the alleyways and hidden sex dens to follow Eastland on his quest for justice, spurred by the mutilation of his dearest friend. Glickenhaus creates a New York City that is dirty, violent and corrupt on every level. A film where little or no moral characters exist and that makes you want to take a bath after it’s over. It’s a revenge, action film that’s directed more like a slasher movie, unafraid to go places mainstream movies won’t and smart enough to not try to be more than it is. It’s an exploitation movie to it’s core, showing a darker side of the world’s greatest city at a time where lawlessness was at it’s worst. Obviously, 80s nostalgia permeates the film now and adds to it’s cult classic status. The film’s not perfect. Eastland goes from mild mannered vet to homicidal vigilante far too quickly to appreciate the effects of his being pushed too far. Having no main villain after he deals with the Ghetto Ghouls early on, robs the film of a more focused story and makes Eastland’s actions appear random at times. The pace is rather slow…though not uncommon in this era of movies. The action, aside from the Viet Nam opening is rather unremarkable. The acting is passable at best and the ending, though unconventional, is rather abrupt. It is an exploitation film after all and it delivers the sleazy goods more than it stumbles and gives us a down and dirty look at NYC at a time when the Big Apple had lost a lot of it’s luster. It’s a bloody, bare bones grind house flick about vigilante justice, street style, without the Hollywood gloss of the similar Death Wish.

The cast are all efficient enough, though, we won’t be handing out any awards. Robert Ginty is fine as Eastland. He is a bit wooden, but his boyish looks and calm delivery make him a good choice as Eastland, as he is not someone you would immediately expect to be a psychopathic vigilante. Christopher George is his usual reliable self as the macho, tough-guy cop tracking The Exterminator and he works in the type of part he played often in his career. The rest of the cast are an assortment of gangsters, gang members and slimy CIA agents and everyone fits in with the exploitation atmosphere just fine. Samantha Eggar has a small role as George’s doctor girlfriend and she may be one of the only nice people in the film apart from Michael’s wife Maria (Michele Harrell).

Released by legendary studio Avco Embassy Pictures, I didn’t see The Exterminator when it first came out, but caught it a few years later on VHS and wasn’t overly impressed at that time. I did see the lackluster sequel from Cannon Films in 1984. The original is a cult classic and I think I appreciate it more now for what it is and that it presents such heavy nostalgia of the early 80s NYC in all it’s sleazy 42nd street glory. The city has greatly improved since then and while that is good for visitors and occupants alike, we can now safely revisit one of it’s darkest times, crime-wise, through exploitation films like this, that dove into the immoral muck and mire with both feet and swam through it proudly…and The Exterminator does just that as any good grind house movie should.

3 about to become chopped meat mobsters.