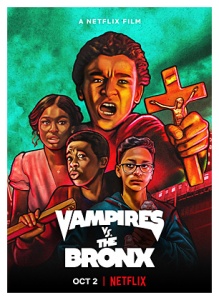 Fun flick has three friends, Miguel “Little Mayor” Martinez (Jaden Michael), Bobby (Gerald W. Jones III) and Luis (Gregory Diaz IV) having more to worry about than the mysterious Murnau Properties realty company buying up homes and businesses all over town. Miguel and his friends come to believe the new folks moving into the Bronx are vampires and their plans are far more sinister than simply gentrifying the neighborhood.

Horror comedy is directed with a nice balance of both by Oz Rodriguez from his script with Blaise Hemingway. It also adds a nice dose of ethnic flavor from the varied peoples of this Bronx neighborhood and a strong sense of community. Rodriguez presents his story seriously enough, so the vampires have threat and the themes of urban gentrification and the dangers of inner city life are not lost. At the same time, we are entertained, as “Little Mayor” and his buds try to convince everyone that vampires have come to the Bronx and, of course, no one believes them. Michael, Jones and Diaz make an endearing trio of good friends turned vampire hunters, trying to preserve the only life they know, while Sarah Gadon makes a sexy and sinister vampire lord trying to take it from them. All the cast are good, with those portraying neighbors adding character and bringing cultural nuances to their roles, while those playing vampires are threatening enough to give their bloodsuckers menace. A fun and family friendly kids vs. monsters movie that may be predictable at times, but is still a really good time nonetheless. Also stars Shea Whigham as a vampire familiar realtor, Cliff “Method Man” Smith as the local priest and a cameo by Zoe Saldana as a nail salon owner. Vampires vs. The Bronx can be found streaming on Netflix!

Splinter is a small but effective horror flick set in the confines of a gas station convenience store in the middle of nowhere. Polly (Jill Wagner) and Seth (Paulo Costanzo) are a young couple on a camping trip who get car-jacked by escaped convict Dennis (Shea Whigham) and his girlfriend Lacey (Rachel Kerbs). Being kidnaped becomes the least of the couples’ problems, though, as they encounter a strangely behaving animal on the road that seems to be under the control of an infecting parasite. Upon arriving at a remote gas station, they become trapped inside it’s convenience store by the also infected attendant (Charles Baker) and soon, one of their own, turned by the invading organism. Now the surviving three must fight for their lives against an unknown entity that is intent on taking over their bodies for it’s own nefarious purposes.

The film is effectively directed by Toby Wilkins who co-wrote with Ian Shorr and Kai Barry. The film combines elements of such thrillers as John Carpenter’s The Thing and 28 Days Later, but manages to be it’s own movie. Wilkins uses his isolated setting well and never let’s thing quiet down too long, so it maintains a constant intensity. He creates some nice suspenseful action sequences and an interesting dynamic as couple and kidnaper have to bond and work together to survive. There is a purveying atmosphere of dread and the FX portraying our mysterious organism and it’s carnage are well done and quite gruesome at times. Wilkins also keeps the exact origin of the parasite ambiguous, though there are some hints to make us think. Sure, it’s not perfect. The similarities to other flicks keeps it from being completely fresh, or feeling all that original and the convenience store setting is exactly that, as our characters have almost everything they need at their fingertips as the plot moves along…though it also exemplifies their resourcefulness. Otherwise, it’s a small and entertaining horror thriller that gets far more right than it does wrong.

The small cast work very well together. Sexy Jill Wagner is a strong and resourceful heroine. Polly is written as the stronger willed of the couple and Wagner plays the part well as she tries to cope with the situation, while also trying not to emasculate her more demure boyfriend. A scene that exemplifies this well is when the SUV gets a flat tire and it’s Polly who volunteers to change it when under pressure from Dennis. It demonstrates that she is the alpha in the relationship as the whole camping thing is her idea to begin with. Paulo Costanzo is good as Paul. Paul is a biologist, so we get our creature exposition through him and conveys a character who is a more passive and less aggressive person than his girlfriend. Costanzo also gives us glimpses of the frustration Paul suffers when his girlfriend Polly proves the stronger of the two and isn’t afraid to show it. He also gets his moments to shine, too, as his intelligence proves more than useful in such an unthinkable situation. Shea Whigham gives us an interesting character in escaped con Dennis. Sure, he starts out as a bad man, but reveals a bit of a nobility when he and his captives find a common enemy. The character dynamic between he and Polly is interesting as they have far more in common than she and Seth and almost function better as a team. Rounding out is pretty Rachel Kerbs who creates a meek yet troubled woman in Lacey, Dennis’ drug addicted lady.

Simply put, this is a creepy good horror flick. It’s not completely original, but utilizes the familiar elements well and constructs a story ripe for tension, suspense and chills in an isolated setting. The acting is better than usual in a small film like this and the characters are likable and work well together. It also playfully turns the traditional gender roles around, a bit, with the relationship between Polly and Paul. There is a little mystery to the proceedings and the FX are strong in the representation of a not so traditional creature/organism and the gruesome havoc it reeks. Overall, it’s a very satisfying little movie that never tries to be more than what it is.