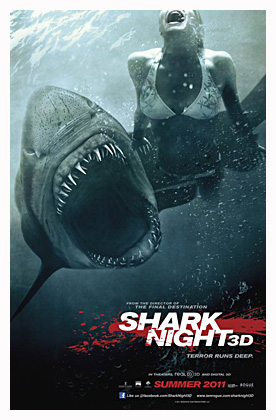 Considering how ludicrous the Sharknado films get and how popular they are, I ‘m surprised how much flack this flick gets. Personally, I think it’s a fun B-movie that is sort of a Texas Chainsaw Massacre with sharks…sounds good to me!

Simple but, far fetched story has a group of attractive twenty-somethings going up to friend Sara’s (Sara Paxton from Innkeepers) family vacation house that is situated on a small island in the middle of a large saltwater Louisiana lake. Soon after their arrival, one of their number is attacked and mauled by what appears to be a shark. Now they find themselves stranded on the island and surrounded by predators, usually found prowling the oceans, with their numbers dwindling. The sharks aren’t the only threat though, as they aren’t there by accident and those responsible come out of hiding to make sure Sara and all her friends become fish food.

Sure, as written by Will Hayes and Jesse Studenberg and directed by David R. Ellis, this is a silly flick. The filmmakers know it, though and have a good time with it. They play it straight, not making a joke out the preposterous story of rednecks filling a lake with all species of sharks for their own amusement and personal gain. They let the story itself provide the entertainment..and it is fun, if you let it be. There are some cheesy CGI FX, offset with some nice animatronics, and a decent amount of blood and gore, though it could have gone a little more overboard with that and not hurt things, but, the film was released as PG-13 and the unrated DVD cut probably amounts to a routine R. Jaws was PG and that was quite effective, so, I’m fine with the amount of bloodshed as is. Like a slasher we get an attractive cast to fall victim to our hungry critters and there is enough nubile flesh in bathing suits to supply eye candy for everyone. It’s not quite over-the-top enough to be an exploitation flick, like Alexandre Aja’s Piranha remake, but, it certainly has more in common with that flick than a straight shark thriller like The Reef. Ellis does get some suspense and intense action out of the story and the villains are quite hate-able as bad guys should be…and there are a lot of sharks.

The human cast are all fine and mostly hired more for their looks and figures than their acting. Paxton is very sweet and likable as heroine/final girl Sara and can’t say she looks all that bad in her blue bikini which is predominately her only wardrobe. Same can be said of American Idol alumni turned actress Katharine McPhee as tattooed rebel chick Beth. Dustin Mulligan is a fine hero with his nerdy Nick and veteran Donal Logue is perfectly suitable as an alcoholic redneck sheriff. The rest of the supporting cast are equally suitable as either shark fodder or deranged hicks.

I like this flick. It’s no classic but, it is fun and there is enough blood and bikinis to pass the time. The combination of shark flick and deranged backwoods locals movie worked for me and there is enough action and suspense to entertain despite the silly story. Not a looney as Sharknado but, goofy enough in it’s own right and with a few beers thrown in, it’s a worthy watch on the couch.