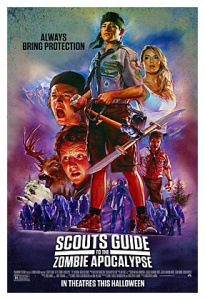 SCOUTS GUIDE TO THE ZOMBIE APOCALYPSE (2015)

Completely generic and predictable horror/comedy finds three nerdy boy scouts (Tye Sheridan, Logan Miller and Joey Morgan) teaming up with a stripper (Sarah Dumont) as they search for one’s sister (Halston Sage) during a zombie outbreak (does one town merit an apocalypse?).

There is literally nothing new or even remotely clever in this routine zombie comedy directed by Paranormal Activity: The Marked Ones‘ Christopher B. Landon, who, for some reason, needed three co-writers to crank out a by-the-numbers flick with little or no inventiveness or originality. We get exactly what we’d expect…a lot of gore, even more vulgar toilet humor and the typical ‘nerd wins hot chick by battling evil’ scenario that has been done to death since the 80s. It’s not that the flick is ever really boring or badly made, it’s just that it is completely void of anything that might set it apart or deviate from the same formula, be it zombie comedy or ‘nerd becomes hero’ flick, that has become commonplace by now. Landon did a good job with Marked Ones and gave us a few scares and a second wind with a well worn franchise and formula. So, why he couldn’t do the same here is disappointing. The cast all have fun with the material, at least and feisty Sarah Dumont is notable as eye-candy and ass kicker. Also stars Krampus‘ David Koechner as a Dolly Parton obsessed scout leader. 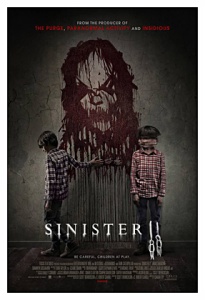 Sequel finds Deputy So and So (James Ransone) now having left the force and tracking various murder cases, linked to Bughuul, across the country. His search leads him to a secluded church and farmhouse where a mother, Courtney (Shannyn Sossamon) and her twin sons (Dartanian and Robert Daniel Sloan) are hiding out from an abusive spouse. Of course, this is a former crime site and Bughuul and his child minions have their sights set on one of the boys.

This awful sequel makes the big mistake of having the worst character from the first film be the lead here. Of course he’s called Deputy So and So, because Deputy Dewey was already taken. This weak flick is surprisingly written by original flick scribes, Scott Derrickson and C. Robert Cargill, though this time directed by Irish director Ciaran Foy. The original had it’s moments, but was a bit overrated, but this sequel is just boring, sluggishly paced and gives us nothing new or interesting about the thinly written, generic boogieman Bughuul. Most of the screen time is taken up by his creepy spirit children trying to coax one or the other of the boys to join them in murder and Deputy So and So being just as annoying as last time. It’s a snooze-fest with zero tension, suspense or legitimate scares. A complete waste of time and surely a disappointment for fans of the first flick.