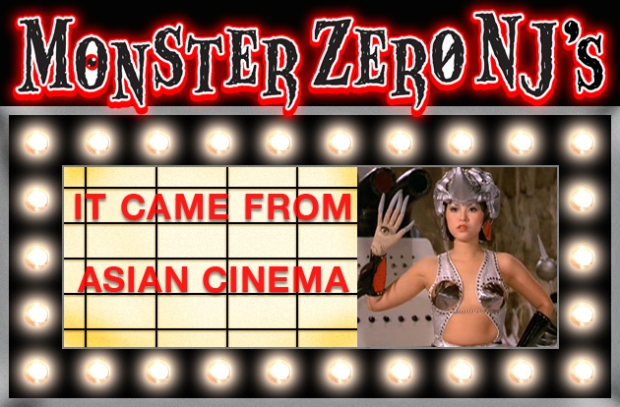 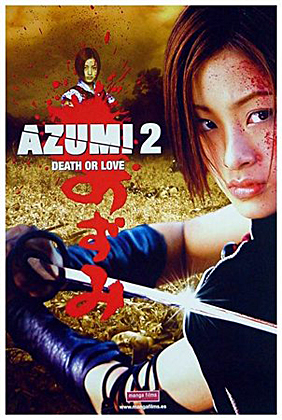 While this sequel isn’t a bad flick, it is a disappointment after the comic book-style roller coaster ride that was the first installment. Sequel is also directed instead by The Gamera Trilogy’s Shusuke Kaneko and Kaneko creates a more somber and traditional feel for the movie which also seems to be done on a lesser budget and scale.

Story picks up after the first movie with Azumi (Aya Ueto) and Nagara (Yuma Ishigaki) vowing to finish their mission to assassinate their final target, Sanada Masayuki (Mikijirō Hira). Things get complicated for Azumi when they join a group of bandits whose leader Ginkaku (Shun Oguri) bears a strikining resemblance to Nachi…the man Azumi loved and killed. Now the pretty assassin once again begins to doubt her occupation and path in life as she is falling in love all over again.

Kaneko is obviously a good director as his Gamera flicks prove, but may not have been the right choice to follow up the kinetic and colorful first flick. Kaneko has a more traditional style and we get a more laid back and sometimes somber story this time and one that appears to be far smaller in scale and possibly budget. The pace is a lot more moderate though it does have it’s share of top notch sword fights and there is plenty of bloodshed. The film seems to focus more on the dramatic aspects than the action, though and it’s characters are far more subdued even with more comic-ish characters like Roppa (Kengo) and the spider-like ninja Tsuchigumo (Tak Sakaguchi). The script is again by Mataichiro Yamamoto who co-wrote this time with Yoshiaki Kawajiri and seems to focus more on the character interplay and intrigue, this time, creating a more intimate story as opposed to Azumi‘s epically scaled tale. It does’t quite have the uniqueness Kitamura’s style of directing embellished his film with and stands out far less from the more routine sword flicks from Japan. The cinematography by Yoshitaka Sakamoto is a bit more muted in color thus further removing the more comic book/manga feel from the movie which overall is still a well made and satisfying conclusion to the story began in Azumi.

Again it’s Aya Ueto’s show, though she shares a lot of time with the other characters and is more part of an ensemble this time. She is solid as she was in part one and still gives Azumi a nice conflicted personality when hardened assassin collides with the young woman who dreams of a normal life she may not be able to have. The rest of the cast are very good, especially the returning Yuma Ishigaki as her only surviving teammate, Nagara and Kazuki Kitamura as Kanbê Inoue, who has now aligned with Sanada. The characters are less colorful, but performed well.

While the film is a disappointment when compared to Kitamura’s original, it’s still not a bad flick on it’s own. It has some good action and the cast, especially Ueto, do perform well, it just a more moderately paced and scaled adventure that tones down the more comic book aspects for a more traditional samurai flick approach. It does complete the story arc satisfyingly while giving us a Sergio Leone-esque ending that leaves the door open for Azumi to return someday. As Aya Ueto is still in her early thirties and Kitamura hasn’t had much success in his US film career, hopefully that happening is still a possibility.