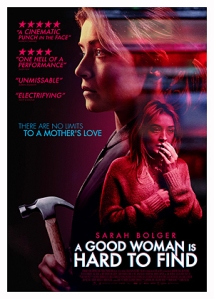 Sarah (Sarah Bolger from Emelie) is a recently widowed single mother trying desperately to raise her children in a bad neighborhood. One night, low-level drug dealer Tito (Andrew Simpson) forces his way into her home to hide after stealing drugs from local kingpin Leo (Edward Hogg). He wants her to hide the drugs for him in her home to which he will give her a cut of the sales. She reluctantly goes along, till things start to spiral out of control and Sarah must violently confront Tito. Add to that, she is faced with the knowledge that it was Leo who killed her drug dealer husband and he knows where Tito was hiding his stash. How far will Sarah go to protect her two children?

British crime thriller is directed by Abner Pastoll from a script by Ronan Blaney and is completely routine and forgettable if not for a great performance by leading lady Sarah Bolger. There is nothing we haven’t seen before in this United Kingdom set drug/crime thriller and turning it into a revenge flick in the last ten minutes is jarring not clever. Bolger’s performance is the only thing that keeps one interested, as a troubled young mother trying to do what’s right for her kids and sometimes messing that up. The villains are generic street thugs and we get the usual graphic violence once things start to go terribly wrong for Sarah and her reluctant involvement with the local criminal element. Some of her actions were a little hard to swallow, but the actress is so good, we cut her some slack. Hope next time Bolger gets a meaty role she can show her acting skills in a better movie. Generic and forgettable low level crime drama elevated by an actress far better than the material and who gives strong emotional depth to her character.