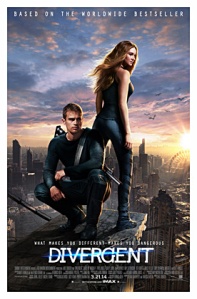 Another teen-centric sci-fi movie based on a book series. This one by Veronica Roth has a post-war walled city of Chicago where society is separated into 5 groups referred to as ‘factions’ that each serve a purpose to support the city. If you think this is a thinly-veiled metaphor for the high school class structure, it just shows how obvious it all is. Subjects are tested when they come of age to determine which group they are best suited for but, are ultimately allowed to choose their own faction… which kinda negates the point of the test. Enter Beatrice Prior (Shailene Woodley) who is born into the Abnegation (the good kids) faction but, yearns to be in the Dauntless faction (the rebels, cool kids) who protect the city and maintain law. But, her aptitude test brands her a ‘Divergent’… someone capable of being in any of the five groups… and thus she must try to hide her designation, as being whoever you want to be, is frowned upon in this high school… ah-hem, futuristic society. Throw in her efforts to succeed as a Dauntless, falling for her hunky Dauntless trainer ‘Four’ (Theo James) and saving the city from a coup d’etat and we have all the paper thin messages about being who you are, being whatever you want to be, overcoming adversity and first love that any pimpled teen could want. The saving grace is that director Neil Burger (Limitless) moves everything at a brisk pace, takes this teen angst metaphor seriously and gets good work out of his cast especially leading lady Woodley, who is no Jennifer Lawrence and her ‘Triss’ is no Katniss, but, she is charming and endearing enough and makes a feisty heroine. Overall, it’s actually manages to be somewhat entertaining despite how obvious and derivative the material is. Also stars Kate Winslet, Ashley Judd, Ray Stevenson and Jai Courtney.

Actor Jason Bateman makes his directorial debut in this deviously funny and delightfully inappropriate comedy about 40 year old grade school drop out Guy Trilby (Bateman) who exploits a loophole in the rules to enter a children’s national spelling bee. Trilby obviously has an agenda, other than embarrassing a bunch of 10 year olds, as he drags a reporter (Kathryn Hahn) along and enters in a friendship/rivalry with a precocious Indian boy (Rohand Chand) who also wants the championship. Andrew Dodge’s script has some blisteringly funny moments, though there are a few sentimental ones too, and director Bateman gives a really hilarious performances as the bitter and angry Trilby, who will stoop to any level to mow down his pre-adolescent competition. Bateman also gets very good work out of his fellow cast members, including young Chand, and crafts a movie that is not afraid to ‘go there’ and present it’s young spelling bee contestants in hysterically inappropriate spots. Suffers slightly from a routine, sentimental climax but, otherwise is a daring and very funny work from first-time director Bateman and writer Dodge. Also, at 88 minutes the movie knows not to wear out it’s welcome.