70’s Blaxsploitation flick from producer Samuel Z. Arkoff and the legendary American International Pictures isn’t one of the best of that era, but certainly isn’t among the worst. Sugar Hill tells the supernatural story of Diana Hill (Marki Bey) who is known to everyone as Sugar. Sugar’s boyfriend, Langston (Larry D. Johnson) is murdered by gangsters and the distraught woman turns to voodoo to exact revenge. Soon the men of crime boss Morgan (Robert Quarry) start to fall, as Sugar and her army of zombies hunt them down one by one and gruesomely murder them.

Flick is the one directorial effort from prolific producer and writer Paul Maslansky from a script by Tim Kelly. It’s directed a bit by-the-numbers and has a somewhat slow pace even for a 90 minute film. Sugar Hill does benefit now from it’s nostalgic charm, but that doesn’t totally get us past that some of the acting is a bit too bad to enjoy at times and the dialogue a bit too badly written to really laugh at. Don Pedro Colley’s Baron Samedi, for example, is almost comical, despite the film’s dead serious tone. There are some amusingly cheesy SPFX…especially the make-up on the zombies…and a few spooky moments, too, such as when they first rise. If that doesn’t add some entertainment to it, there are always some of gangster Morgan’s outfits to provide nostalgia and chuckles. It is also of interest to see how racist, misogynist and sexist a movie could be in that era without raising a ruckus, as in today’s politically correct times. Not to mention, as well, how much PG rated films got away with before the ratings system became more conservative in the 80s. Lastly, this story of a woman who uses voodoo to avenge her lover’s murder has it’s heroine become so gleeful at slaughtering the mobsters who beat her fiancé to death, that sometimes it’s hard to root for her. Sure the bad guys deserve it, but she is now just as bloodthirsty, or more so, than the men she stalks and kills. It’s a thin line, but sometimes it’s hard to get behind someone who’d work perfectly as the villain in another movie. Then again, Sugar Hill is not a morality play, but simple exploitation entertainment.

Overall, this is an amusing example of a distinct era of filmmaking, but not quite one of the best, though there are those that might argue that. Sugar Hill is certainly worth seeking out by those interested in Blaxsploitation cinema and does have it’s entertainment value. Also stars Richard Lawson, who appeared as “Willis” in Scream Blacula Scream, as Det. Valentine and Zara Cully as voodoo priestess Mama Maitresse. 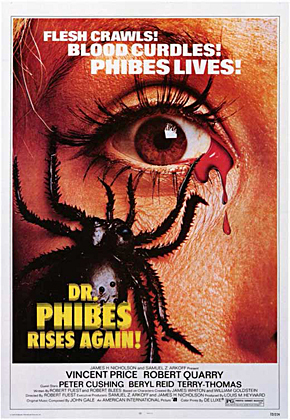 Dr. Phibes (Vincent Price) rises from his self-imposed embalming and travels to Egypt to find the River of Life to resurrect his bride (Caroline Munro) from her eternal slumber. Phibes is in a race against time, as his rival Darius Biederbeck (Robert Quarry) also seeks eternal life and is headed there himself with his team. Phibes, not to be undone, finds gruesome ways to eliminate his competition, as he closes in on his goal.

Sequel is again directed by Robert Fuest from a script by he and Robert Blees. The 60s art deco look also returns, as does the twisted sense of humor. This installment seems to be a bit quicker paced and has more of a sense of fun, as Phibes’ death traps are even more elaborate and he has a hidden lair in one of the tombs that would make a Bond villain envious. How did he get all this stuff into Egypt and built without notice? Who cares? It’s a delightfully devious and fun romp as Phibes now has a rival who may be, at heart, even more sinister than he is. This dynamic makes Phibes more of an anti-hero this time as he slaughters his way through Biederbeck’s team with one death more inventive than the other. Watching him outwit his nemesis and decimate his accomplices, one by one, is a lot of ghoulish fun.

Price is again in top form, as usual, as Anton Phibes. The legendary actor is a delight to watch as the diabolical madman, and this time we don’t have to hide the fact that we are rooting for him. Robert Quarry is a suitable foil for the skull faced Phibes. His Biederbeck is a smug megalomaniac and we delight in watching his scheme slowly unravel at the hands of the devious doctor. Fiona Lewis is a sexy femme fatale as Biederbeck’s accomplice and romantic interest, Diana and Phibes’ loyal assistant Vulnavia returns (somehow) as well, though is this time played by Valli Kamp. Flick also features a brief cameo by the legendary Peter Cushing as a ship’s captain and a returning Terry-Thomas in a new role.

Like the first film, this is a cult classic and another example of why Vincent Price is a horror legend. It’s a bit more outlandish and thus twisted fun, than the first film, though the original was a bit more gruesome. There were many plans to bring the doctor back for a third film, one project was to be directed by George Romero and another would see Quarry return and add William (Blacula) Marshall to the mix. Sadly, none ever happened. There is talk of a remake with Malcolm McDowell, but this is such a classic Price role, it’s hard to see anyone else playing the organ and wearing the skull face.

Count Yorga (Robert Quarry) is back…though not sure how…and takes up refuge in an old mansion opposite an orphanage. He sets his sights on pretty teacher Cynthia (Mariette Hartley) and his fangs on all her family and friends. Can anyone stop this fiend before he takes Cynthia as his bride and everyone else as his dinner?

Sequel is directed again by Bob Kelljan from a script he co-wrote with Yvonne Wilder and is a rather dull return for Quarry’s suave Bulgarian count. Much like the first film, there are some spooky scenes, but there is also a lot of talk and the story never gets interesting enough to lure us in. Oddly the addition of an orphanage doesn’t amount to much as only one child seems to fit into Yorga’s plans and the action takes place, for the most part, in Yorga’s Mansion. Yorga himself is absent for stretches of time as the film focuses on Cynthia trapped in his lair and being taunted by his minions. As for Yorga, Quarry again makes a good vampire, but the rest of the cast is fairly wooden and Hartley isn’t given much to do but look frightened. Roger Perry again stars, but not as the same character he portrayed in the first film…which is a little off-putting. Technically the film looks good through cinematographer Bill Butler’s lens and Bill Marx’s score adds some atmosphere.

Not a big fan of the first Yorga film and this one won’t convert anyone who is not. It’s slow moving, has long stretches with no action and it’s story is routine for a vampire flick. The placement of Yorga’s lair near an orphanage doesn’t get used to it’s full potential and the fact that Yorga allows his minions to taunt his intended bride, doesn’t really make much sense either…unless he likes nutty women. A dull sequel. 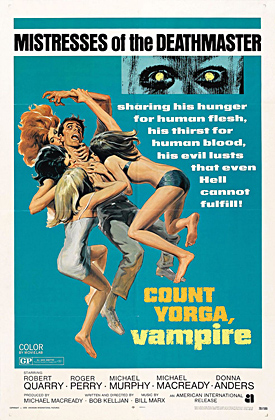 Quarry plays Bulgarian vampire Count Yorga who has moved to L.A. and set his fangs on a group of friends by assimilating himself into that group by dating one’s mother…who then mysteriously dies (mysteriously…cough, cough). He then gains their trust by trying to console her daughter, Donna (Donna Anders) with a seance. Soon, one by one, the count goes after the women of the group to start his vampire harem. It’s up to the men, along with a doctor friend, to stop the fiend from putting the bite on their babes.

The film is directed in a pedestrian manner by writer/director Bob Kelljan (Scream, Blacula, Scream) and while he does give us some effective scenes, (the cat, the last act in Yorga’s mansion) in general the film could have used a bit more atmosphere, tension and good old fashioned scares. Yorga is classified by some as a classic 70s horror flick and it does have that nostalgic charm, but there were other early 70s vampire flicks like Blacula and The Night Stalker that just have more bite. Quarry does make a good vampire here. He is handsome and mysterious and can exude a calm menace when Yorga needs to be threatening, but he isn’t given all that much to do as there is a lot of scenes with characters sitting around talking and very little actual action. Quarry is definitely key in making the scenes that are effective work, especially when the film finally picks up a bit in the last act. The rest of the cast, thought, are rather bland and it seems really odd that the first character to suggest the work of a vampire, is the doctor (Roger Perry), who, as a man of science, should be the most skeptical. Also amusing is how quickly the rest of the characters go along with it.

Overall, this is an OK movie and there definitely is some entertainment value, especially with the 70s nostalgia elements, but it’s not quite the flick it’s reputation suggests it is. It is typical of the type of film American International Pictures was releasing at the time and probably would fit right in with the Blacula films, Dracula A.D. 1972 and The Night Stalker as part of a 70s vampire movie marathon.

EXTRA TRIVIA: in a move that echoes some of today’s big studio decisions, Yorga had a number of gore scenes removed by AIP to get a PG rating (GP back in those days for some reason) and reach a larger audience. Today on DVD, those scenes are restored and the film is now rated, ironically, PG-13.