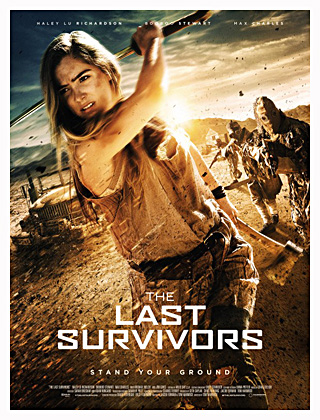 Formally titled The Well, this post-apocalyptic drama takes place in a world that hasn’t seen rain in ten years. Once lush farm lands are now barren and home to squatters who survive on remote farms with wells that are slowly drying up. If the threat of not having water isn’t great enough, there is the greedy Carson (Jon Gries), a man who seeks to control all the remaining water and will kill anyone on the surrounding lands he finds using the wells. Enter young Kendal (Haley Lu Richardson) and Dean (Booboo Stewart) who live hidden on the ruins of the Wallace Farm For Wayward Youth surviving on an underground well. They have plans to escape, if they can find the right part for the old Cessna on a nearby property. Time is running out, though, as the ill Dean’s kidney’s are failing and Carson is becoming more desperate to rid the land of ‘vagrants’. Soon teen Kendal must choose between leaving Dean and the farm behind, or fight superior odds to save what she holds dear.

Film is well directed by Tom Hammock from his script with Jacob Forman. This isn’t an action flick, per se, and the film is moderately paced, but it is still an engrossing story of survival featuring a very endearing and strong central character in the young Kendal. Despite the looming threat of both running out of water and running into Carson, Kendal moves with a singular focus and that is to get her, Dean and a young boy, Alby (Max Charles) hiding on a neighboring farm, on that plane and out of there. It’s watching this tenacious teenager fighting to keep those around her alive and at the same time, not lose her humanity, that is what drives the film and keeps us watching despite familiar elements for this type of flick. Sure, we have seen many a post-apocalyptic drama with noble survivors and greedy villains, fighting over/hoarding gas or water, but this is more character driven and gives us a strong leading lady to follow. The film does have it’s confrontations and there is some startling bloodshed in the last act, when Kendal’s fragile world starts to collapse and she is forced to go on the offensive. The movie looks good on a low budget with it’s minimal but effective desert setting and properly creates the purveying mood of desolation and gloom, but not without a glimmer of hope via the resilient Kendal.

Hammock hit a home run with the casting of young Haley Lu Richardson as our strong-willed fighter, Kendal. Richardson carries a presence that comes across as natural and delivers a nice range of emotions in an untraditional story and setting. You believe she cares for Dean and Alby and fully believe in the risks she takes to see them safe. In a somewhat similar role, she reminded me a bit of Jennifer Lawrence in Winter’s Bone. In the final confrontation with Carson and his thugs, we are rooting for her all the way. As Carson, the underrated Jon Gries creates a man who is so full of his own self-righteousness that he truly believes the water is his and murdering other survivors is actually an act of mercy. He makes an interesting villain and again proves himself a versatile character actor that doesn’t get the credit he deserves. Booboo Stewart is effective as the kind but ailing Dean. It’s easy to see why Kendal cares for him so much and why he is her emotional and moral anchor. Girlhouse‘s Nicole Fox plays Carson’s daughter, Brooke and she is actually far more vicious than her father and outright enjoys the acts of murdering the innocent, while her father makes excuses to justify it. We also get appearances from veterans such as Barbara Crampton, Michael Massee and Rena Owen, who was so good in the powerful New Zealand drama Once Were Warriors.

There are a lot of really familiar story elements that keeps this from completely impacting the viewer, but it’s leading lady keeps us far more interested than we should be with it’s oft told story. Haley Lu Richardson is a star in the making and gives us a character far more worldly and wise than her age would imply. The film is well directed by Tom Hammock and despite it’s intentionally slow burn, it does deliver some action and violence that comes with such a story of survival against overwhelming odds. An impressive starring role for Haley Lu Richardson and an impressive debut from director/writer Tom Hammock who was production designer on The Guest and All The Boys Love Mandy Lane.