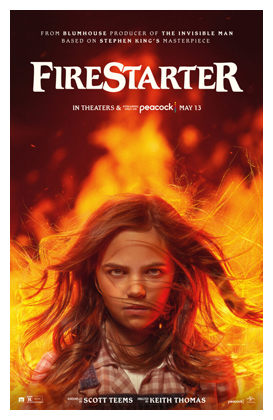 Blumhouse/Universal flick is a remake of the 1984 thriller, which in turn, was an adaptation of Stephen King’s novel. The story is the same. A young couple Andy (Zac Efron) and Vicky (Sydney Lemmon) undergo drug experiments that give them special abilities. More troublesome, is their daughter Charlie (Ryan Kiera Armstrong) is born with the power to set fires with her mind. Now the shady organization that created them is hunting them down to take control of Charlie’s incendiary skills.

Update is lamely directed by Keith Thomas from a weak script by Scott Teems that fixes none of the problems with the original film’s screenplay. There is no suspense, the film is extremely by-the-numbers and dull, the villains are boring and the performances stale. Only young Ryan Kiera Armstrong gives her underwritten role a little life. There has been little or no publicity for this release and now it’s obvious why. Aside from being completely forgettable, the film even looks cheap. The only redeeming thing about the flick is the score by legendary filmmaker/composer John Carpenter, his son Cody and Daniel A. Davies. The delightful irony here is that Carpenter was originally set to direct the 1984 version before being fired after the lackluster box office performance of The Thing. Now his contribution is the only memorable part of this pointless remake. Film is currently available in theaters and streaming on Peacock. 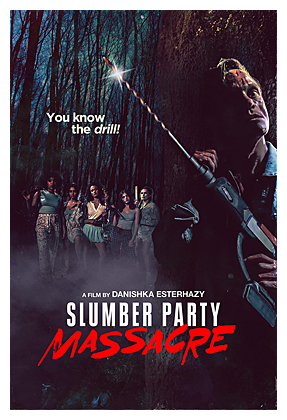 Flick is a remake/reimagining and, to a degree, a sequel to the Roger Corman cult classic. Flick opens at a slumber party in the 90s where power-drill wielding serial killer Russ Thorn (Rob Van Vuuren) murders all the girls except for Trish (Masali Baduza). In present day, Trish (Schelaine Bennett) is now an over-protective mother of her own daughter Dana (Hannah Gonera), who is headed off to a slumber party of her own with friends. Needless to say Russ Thorn shows up, but the hunter may become the hunted as Dana and her friends are not the helpless victims her mother’s friends were.

Flick is written by Suzanne Keilly and directed by Danishka Esterhazy, who directed the disappointing Banana Splits Movie. This slasher remake/homage is a dull mess that tries to be contemporary and clever, but is just routine and dull and never takes full advantage of any of it’s own ideas. Making the girls survival savvy and actually luring Russ into a trap was an amusing idea, but the film defeats it’s own purpose when the ladies start to fall victim anyway to serial killer #2—and that killer’s identity is so obvious, not sure why they bothered to try and keep it a secret. There is also a subplot of a house full of boys who mistake Dana and her friends for the killers, but that doesn’t go anywhere either, as the arrival of killer #2 puts an end to that plot element. The end confrontation is somewhat effective, but at that point the film has gotten so convoluted, you really don’t care. Stick with Corman’s classic as this SYFY misfire will be forgotten before October is even over. 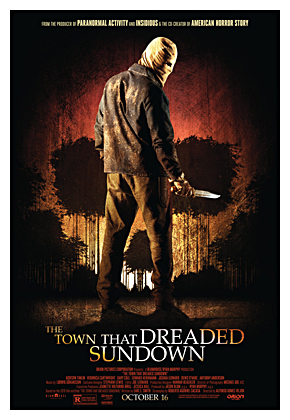 The original The Town That Dreaded Sundown is based on a true series of murders that occurred in Texarkana, Arkansas in 1946 and were committed by a person known only as “The Phantom”… a man who was never caught. The 1976 film is considered a cult classic but when I finally caught up with it, I wasn’t impressed with the pseudo-documentary flick. Now comes a new version which actually is a sequel of sorts that not only acknowledges the actual crimes but the existence of the 1976 film, as well as Texarkana’s morbid custom of screening Charles B. Pierce’s original film every Halloween… and it’s at one such screening in 2013 that the film begins…

The movie opens with pretty Jami Lerner (Addison Timlin, the scene stealing Stormy Llewellyn in Odd Thomas) and her date Corey (Spencer Treat Clark) leaving a Halloween drive-in screening of The Town That Dreaded Sundown as Jami is put-off by the film’s violence. The two retreat to a local make-out point but, much like the movie, a masked man appears and forces them out of the car, murdering Corey and letting Jami live as long as she “makes them remember Mary.” The traumatized girl makes her way back to the drive-in where the film is showing and soon the town is caught in a real grip of fear as the locals believe The Phantom has returned. Whether he is truly back, or someone is imitating the killer from real life and the 1976 film, the result is the same, soon the bodies begin to gruesomely pile up. Worse for Jami, is that the killer has chosen her to be his messenger as he threatens to kill more unless she delivers his message of remembrance. But Jami decides to fight fire with fire and begins to investigate the original case to try to find out who is the one actually stalking her and murdering innocent townsfolk and why. But will she uncover the real killer, or will he catch her first?

Written by Roberto Aguirre-Sacasa and directed by Alfonso Gomez-Rejon, this film takes the Blair Witch 2 concept of making a film about events inspired by the original film but, does it so much better. This is a stylish and sometimes strange… in a good way… flick that is basically a slasher that chillingly references real events and playfully references the original film, even cleverly having the director’s son Charles Pierce Jr. (Denis O’Hare) as a character. There are some brutal and disturbing sequences depicting the killer’s wrath and Gomez-Rejon gives us some nice suspense throughout, especially in the last act when Jami and the masked killer reunite. Not only does the director have a nice visual style to enhance his story and off-kilter storytelling but, gives the film a nice atmosphere of foreboding and bravely paces the film more moderately, much like the original film and the films of that era were paced. This is complemented by Michael Goi’s moody cinematography and Ludwig Göransson’s atmospheric score. The killings are also quite gruesome at times and have a lot of impact and the FX portraying them are well rendered and makes this overall a very effective slasher whether it be a remake/sequel or whatever you want to classify it.

The cast are all good with Timlin being a moody yet resourceful heroine. She conveys the emotional trauma of a young woman who witnesses her date’s murder yet, the strength to fight back by investigating the very psychopath that may be waiting outside her door. A far different character than Odd Thomas‘ Stormy Llewellyn and proves this is a young actress to keep an eye on. Film vet Veronica Cartwright plays her grandmother who lived through the time of the original murders and gives us a woman who is pained to see her granddaughter living through similar events. Gary Cole is solid as the local sheriff, Anthony Anderson plays an updated Lone Wolf Morales echoing Ben Johnson’s character from ’76 and Travis Trope is charming as Nick, a young man who befriends Jami and helps her with her investigation. A solid cast who do good work in bringing this chiller to effective life.

Overall, I really liked this movie and was pleasantly surprised by it. It cleverly is both sequel and remake yet is also a film made outside the original so, it may deviously reference that film and use both the film and the actual crimes from 1946 as part of its story history. Director Alfonso Gomez-Rejon has a bit of a quirky and offbeat storytelling style that adds to the unsettling atmosphere of the film and gives us some nice suspense and some disturbing and brutal scenes of violence to punctuate it. All in all, a solid and somewhat off-beat horror/slasher that is one of the more interesting horror flicks I have seen this year. Sad, it’s gotten too little attention, especially coming from the horror factory that is Blumhouse. It deserves more.