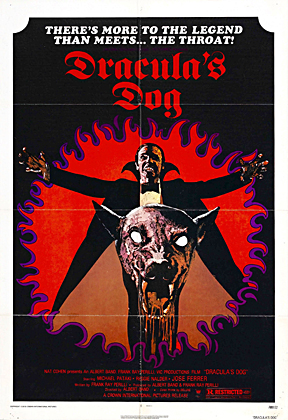 Also known as Zoltan: Hound of Dracula and based on the book Hounds of Dracula by Ken Johnson, this 1977 horror features the legendary vampire’s mutt trying to recreate his master. After being accidentally revived by Romanian soldiers excavating a tomb, Dracula’s manservant Veidt Smit (Reggie Nalder) and his dog Zoltan, set off to America to find Michael Drake (Michael Pataki) who is the last surviving member of Dracula’s bloodline. Once they find him, they plan to turn him into a bloodsucker and their new master. In hot pursuit is Van Helsing-like Inspector Vaclav Branco (José Ferrer) who plans to stop them and their fiendish plot.

Canine-centric vampire flick is written by Frank Ray Perilli, based on Johnson’s book and directed by Albert Band, father of Full Moon Studio’s Charles Band. It’s a silly movie for sure, though played very straight and if there is anything that actually works here it’s that Zoltan and his pack of vampire dogs are kinda fierce and spooky thanks to trainer Karl Miller. There are some fun goof-ups, along the way, like the opening scene that takes place in Romania, with the Romanian army, where a military jeep clearly says “U.S. Navy” on the hood. Its low budget is no better illustrated than by the fact that it mostly takes place outdoors during a Drake family camping trip, reducing the need for sets. The make-up and gore FX are by Stan Winston, so at least they are done well, and director Band does give the silly proceedings a bit of atmosphere. The fact that it’s a film about Dracula’s dog and is taken as seriously as it is, at the very least gives its makers some audacity points.

As for the cast, the Doberman playing Zoltan is definitely the standout. He is a spooky pooch. Reggie Nalder (Salem’s Lot) is creepy as Smit, but Nalder always did nail creepy in his performances. Pataki plays it straight as the clueless last heir to Dracula’s coffin and José Ferrer takes the material very seriously as the valiant Inspector Branco. The supporting players are a mixed bag and the other dogs in the film prove the most effective actors in their roles.

This is a silly flick, though taken very seriously by the cast and crew. It makes it all the more watchable, but it still is about Dracula’s best friend, after all. There is some decent make-up and gore courtesy of a young Stan Winston, and it does have some atmosphere to go along with the unintentional chuckles. Worth a look. Only in the 70s, folks! 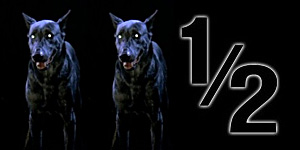 Miniseries is an adaptation of the Stephen King book of the same name (book review HERE) and basically follows the same plot. Vampire story has writer Ben Mears (David Soul) returning to his hometown of Salem’s Lot after many years, to write a book about the Marsten House, a large old house on the outskirts of town renown for it’s dark past. Mears has no idea what he is in for as, at the same time, an ancient vampire named Barlow (Reggie Nalder) has set his sights on the town of Salem’s Lot as his new feeding ground and makes the Marsten House his new home. Can Ben convince this small town that a very real and supernatural horror has made residence there, as townsfolk start to disappear and the concerned locals turn a suspicious eye towards him?

Script is adapted by Paul Monash from King’s lengthy book and at just over three hours adapts it fairly well. The film is atmospherically directed by Texas Chainsaw Massacre’s Tobe Hooper who delivers some solid chills despite the restraint of doing the film for TV. Salem’s Lot has a moderate pace and can be a bit long-winded when watched all at once, but the book is a bit long-winded as well and the flick was originally made to be watched in two, two hour segments aired a week part, which broke it up. The vampire scenes are really creepy and Hooper handles the traditional vampire tropes very well and creates some memorable sequences that are still effective today. Barlow’s purple Nosferatu-like appearance is chilling and effective and the Marsten House has it’s own personality and is visually impressive, especially once we get inside. There is very little blood as it was made for network TV, but that is fine as it has atmosphere to spare, especially in it’s second half. It takes a while to get going, but once it does it is very entertaining.

The cast are good with David Soul making a fine, reluctant hero. His writer does give the impression of a man slightly obsessed with the old house and obviously, it takes him a little time to accept that vampires are real and the town is slowly filling with them. Bonnie Bedelia makes a fine heroine as a pretty school teacher who catches Ben’s eye. Veteran actor James Mason is spooky as Barlow’s human manservant and Reggie Nalder makes for a really creepy vampire under all the make-up and contact lenses and with no dialog. We also have roles by other veteran actors such as Geoffrey Lewis, Kenneth McMillan, Lew Ayres and Fred Willard. A good cast that Hooper guides well.

I saw this miniseries when it first aired in 1979 and as a kid it really creeped me out. It’s not quite as scary all these years later and can be a bit too long when watched in one sitting, especially with some of the melodrama. But, it does have some really spooky sequences as directed by the legendary Tobe Hooper and is one of the better adaptations of King’s work, though in my personal opinion, not one of his better books. Worth watching if you have never seen it.