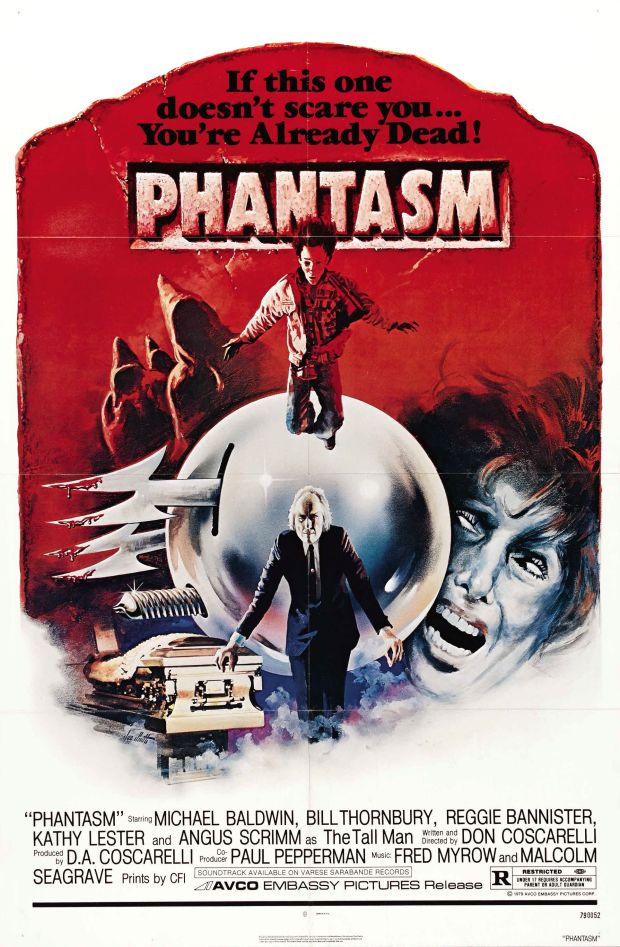 MonsterZero NJ wishes a very happy 40th anniversary to one of my all-time favorite horror films and a true horror original… Phantasm! The Don Coscarelli classic was released on March 28th, 1979 and spawned not only a beloved franchise, but added The Tall Man (the late, great Angus Scrimm) to the list of immortal horror icons!

MonsterZero NJ wishes  a very happy (belated) 38th birthday to one of my all-time favorite horror films and a true horror original… Phantasm! The Don Coscarelli classic was released on March 28th, 1979 and spawned not only a beloved franchise, but added The Tall Man (Angus Scrimm) to the list of immortal horror icons!

Phantasm is a unique horror classic that has never really been equaled and not only spawned one of the most original franchises in horror, but gave us the iconic Tall Man (the late, great Angus Scrimm), the equally iconic knife-edged flying spheres and a monster fighting ice cream man (Reggie Bannister) who is a horror icon as well. Now after 37 years, creator Don Coscarelli is bringing his series to an end with this climactic installment. The story finds Reggie (Bannister) still searching for Mike (A. Michael Baldwin) while being hunted by the Tall Man (Scrimm) and being haunted by dreams that this is all been a product of his own old age dementia. Real or imagined, Reggie unites with allies old and new to take on the Tall Man one last time, as the world itself has fallen into his grasp.

Ravager is the first film Coscarelli has handed over to another director, his co-writer David Hartman who does do a good job trying to recreate the Phantasm feeling, though it’s not quite on the nose as if Coscarelli had done it himself. Still, the duo deliver one of the best entries of the series to say goodbye to this beloved horror franchise, even if there ae a few speed bumps on Reggie’s road to reunite with Mike and send the Tall Man packing one last time. Getting the minor gripes out of the way first…the main one being the limited screen time for Scrimm in his final performance as the alien undertaker. The actor was in his late 80s at the time this was filmed and possibly wasn’t up to a lengthy shoot, either way we do wish there was more of him as he plays the role for the last time before his death earlier this year. There is also Dawn Cody’s Dawn/Jane. The actress first appears as Dawn, a woman Reggie picks up when her car breaks down and she seems like she is going to be important. She leaves the film only a few scenes later and then is re-introduced as freedom fighter Jane about twenty minutes after that. She claims to not know Reggie who certainly recognizes her. Is she the same character? Is she a completely different person? Even Jane never really adds up to be someone crucial, so what was the point other than the traditional Reggie pick-up scene? It’s a shame as she was likable in both parts.

All that is minor as there is still so much to enjoy in this farewell chapter. When Scrimm does appear he is as menacing as ever. It’s a delight to see him as this legendary horror icon one last time. The spheres are back and see a lot of bloody action including newer and much larger ones in the desolated Earth sequences that have an amusing Mad Max vibe, which is new to the series. The narrative is less traditional and follows the dream within a dream structure most of the series followed and despite a very low budget, the FX and action work well enough for us to enjoy, even if not up to Hollywood standards, which was never Coscarelli’s style anyway. The sequences of old Reggie in a retirement home being visited by Mike worked really well and add to the notion that maybe this was all imagined from the start…or was it? There are some really fun sequences that take place in the Tall Man’s dimension, too and some really great cameos from series characters that haven’t been seen in a while, like Kathy Lester’s Lady In Lavendar from the classic original. The film has a moderate pace which works with the surreal nature and there is an atmospheric score by Christopher L. Stone that works in the original theme from Fred Myrow and Malcolm Seagrave and is effective on it’s own.

I really enjoyed this send-off to one of my favorite horror franchises. The original cast returned to their roles without missing a beat and it was bittersweet to see Scrimm one last time as one of horror’s greatest icons. There were a few hiccups and director Hartman had his own style which gave the film a slightly different flavor, but overall he did a good job especially when things crank up in the second half. There were some amusing cameos and all the elements one expects from a Phantasm movie, like spheres, dwarves and gun-slinging ice cream men, are there for fans to enjoy. Watch through the credits as there is a great mid-credits cameo that really adds to the film’s “the gangs all here” approach. A fun finale that ends the series with dignity and nostalgia.

Phantasm is a true horror classic and one of my all time favorite horror films. No matter how many times I watch it, it’s just as weird and creepy as when I first saw it back in 79. It may be considered slow moving and tame by today’s standards, but I still love it.

Phantasm tells the story of the Pearson brothers, Jody (Bill Thornbury) and younger sibling Mike (Michael Baldwin) who have recently lost their parents and now are burying their friend Tommy (Bill Cone) who is said to have committed suicide, but from the opening moments, we know different. All this time spent at the local mortuary has had an effect on the already traumatized Mike, who is starting to believe that the deaths are part of some supernatural conspiracy lead by the mysterious Tall Man (Angus Scrimm), who is the ominous undertaker at the Morningside Funeral Home. But as Mike continues to investigate the creepy mortuary to prove his beliefs to Jody and their best friend Reggie (Reggie Bannister), he finds that not only may he be right about the devious goings on, but the Tall Man may now have the brothers and their pal targeted as his next victims.

Phantasm is a creepy and surreal horror tale from writer/director Don Coscarelli who also made the cult favorites The Beastmaster and Bubba Ho-Tep. It is full of spooky atmosphere and Coscarelli and crew achieve some really nightmare worthy visuals and SPFX on a small budget. From it’s freakish horde of hooded dwarves…whose creation is a disturbing part of the Tall Man’s plan…to the murderous silver spheres that patrol Morningside’s hallways, Phantasm delivers an original and offbeat fright flick with plenty of chills and thrills. The cast for the young protagonists are basically amateurs and are fine, but it is Scrimm and his evil Tall Man that really helps make things work by crafting a malevolent and memorable villain who is now considered a classic horror icon. There is a decent amount of gore throughout the flick, but it’s rather tame compared to more modern horror…though ironically, back in the day, critics sighted it along with Alien and Dawn Of The Dead as examples of horror violence going too far…and the story nicely combines the supernatural with the extraterrestrial to make for a delightfully weird tale. The film does have a dream-like quality and doesn’t always follow a traditional straight and narrow narrative, but it is never hard to follow and it’s surreal tone adds to the overall effectiveness of the film. Phantasm’s equally goose-bump inducing electronic score by Fred Myrow and Malcolm Seagrave also adds a lot of atmosphere to an already atmospheric film and the sound effects guys came up with some pretty unsettling sound effects to accent the bizarre events occurring onscreen.

Obviously Phantasm now also comes with that late 70s, early 80s nostalgia too and that only adds to the fun and while I understand why the newer generation of horror fans may not quite get what the fuss is about, this film for me is an influential classic that has yet to ever really be matched, even by Coscarelli’s own four amusing, but not quite equal sequels. One of my top 5 Halloween season must watches!…and I still want the black 1971 Plymouth Barracuda the Pearson Brothers cruised around in! 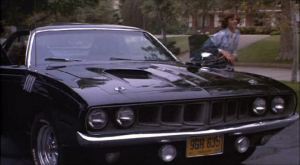 Maybe the coolest car in horror history since The Munster Mobile!