Wolf Creek was a disturbing 2005 flick from Aussie director Greg McLean that introduced the horror community to psychopathic Australian redneck Mick Taylor (John Jarratt). The film produced a sequel nine years later in 2014 and now, a six part mini-series with episodes directed by Ash vs Evil Dead’s Tony Tilse and McLean himself. The story finds an RV crossing the Outback with an American tourist family, The Thorogoods, stopping for the night and encountering Mick. The vicious psychopath brutally slaughters all of them…or so he thinks. Teen daughter Eve (Lucy Fry) survives the carnage and decides to hunt down the murderous Mick and exact some paypack, despite protestations of a handsome police officer (Dustin Clare). Her journey towards revenge puts her in contact with some of the best…and worst…of the Outback’s citizenry, on her collision course with Mick Taylor.

This Australian web series has episodes written, alternatively, by Peter Gawler and Felicity Packard and thankfully returns to the more grounded violence and brutality of the first film, whereas Wolf Creek 2 got a bit too over-the-top for it’s own good. Mick Taylor has been returned more to the brutal psychopath that made him so scary in the first flick with his one-liners and demented cackling kept effective by not being taken too overboard. The tone is gritty and a slow burn as Eve makes some interesting allies and meets some morally questionable individuals while she tracks down the elusive Mick. At the same time Mick encounters more lambs for the slaughter, including some of the individuals that Eve unintentionally draws into the conflict and onto his radar. There are some very disturbing scenes and the first five episodes are well directed by Tilse, who paces them moderately as this is leading up to an eventual showdown. McLean returns to the director’s chair for the final episode where American teen takes on Aussie madman and it’s as good as the best moments of the first two theatrical flicks. If the series has a weakness, it’s that the basic story doesn’t seem to warrant over five hours to tell. We do get the feeling that some of it is filler and that a tighter two hour movie might have told the tale more effectively. We do find out more about Mick’s past and what turned him into the maniac he is. We also get some very brutal sequences as Eve gets toughened up to face Mick and Mick continues to illustrate why we should root for Eve. The film makes very good use of the desolate Outback locations and populates them with some interesting and unsettling characters. The violence level will not disappoint fans of the films and most likely neither will this series, when all is said and done, even if it does feel like a movie stretched out at times.

The cast are all effective and create an assortment of offbeat characters that Eve and Mick wade through. John Jarratt is disturbing, once more, as Mick Taylor. The actor really does good work in having Mick come off first, as an eccentric country bumpkin to disarm his potential victim’s and then chills us to the bone when the inner murderer is released. He plays Mick with demented gusto, but with the help of director and scripts, he is restrained enough to avoid the over-the-top parody that Mick became in the film series sequel. Lucy Fry holds her own in both character and performance with her co-star. She gives us a strong teen who is not going home without finding out who killed her family and wounded her…and making them pay. If the extend time given the story accomplishes anything over six episodes, it is watching Eve grow in anger, tenacity and determination as she begins to realize she is hunting an elusive monster. When she and Mick finally meet, we have no problem believing that this little lady is going to bring it to Wolf Creek’s residing serial killer…and bring it she does. Dustin Clare is good as Officer Hill, who is one of Eve’s few friends in this untamed part of the world. The actor conveys both authority and compassion as a man sympathetic to Eve, yet obviously, bound by the law he upholds to try and stop her…and catch Mick at the same time. The supporting cast are all effective in creating an eclectic group of Outback residents both friend and foe.

Overall, I recommend this series to fans of McLean’s first two theatrical adventures of psychopathic Aussie, Mick Taylor. While the story did feel a bit like a movie plot stretched out over six episodes, there are plenty of effective and brutal moments and the tone returns to the more gritty and disturbing tone of the original film. The pace is a purposeful slow burn and our leading lady becomes quite formidable by the time she goes one on one with Mick. The character of Mick Taylor is once again the more heinous maniac he was in the first film, with excessive theatrics and one-liners left behind for a more unsettling return to the character’s roots. There is talk of a season two and I am curious where they go with it. 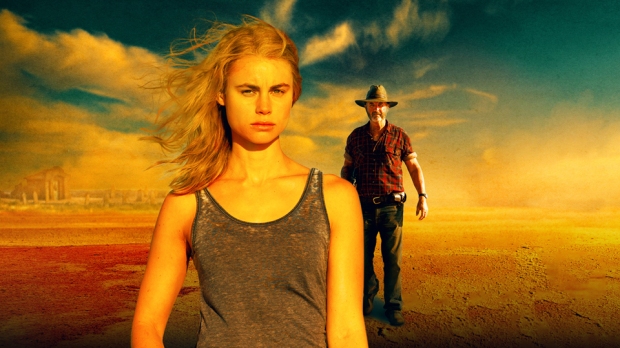