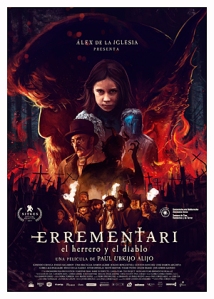 ERREMENTARI: THE BLACKSMITH AND THE DEVIL (2017)

Netflix original is based on a European fairy tale and finds a bitter and angry blacksmith (Kandido Uranga) holding a demon prisoner (Eneko Sagardoy). He blames the demonic creature for the bad things that have befallen him and torments it. When a young orphan (Uma Bracaglia) wanders into his smithy, things get a bit complicated for the three of them.

Film is directed well by Paul Urkijo Alijo from his script with Asier Guerricaechevarría based on this old folktale and takes place in the Basque Country of Spain. The visuals are quite sumptuous and the demonic make-up is exceptionally well-rendered. It’s a dark tale that includes a last act trip to Hell itself, but also has an old world charm to match it’s somber tone. There is some graphic violence, as it is a dark fairy tale after all, but a very well made one, with a good cast and would probably make a nice double feature with Pan’s Labyrinth or The Viy.