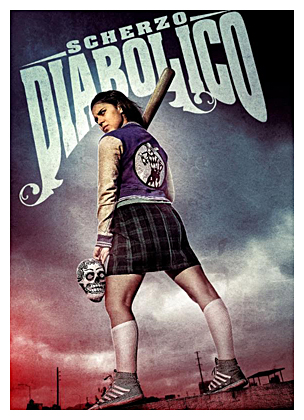 Latest film from Adrián García Bogliano (Here Comes The Devil, Late Phases) tells the story of Aram (Francisco Barreiro), who works for an accounting firm and despite being their best and hardest working employee, seems to be going nowhere. He hatches a devious plan to kidnap pretty Anabela (Daniela Soto Vell), his boss’s (Jorge Molina) teenage daughter. She’s not to be taken for ransom, but only to be held long enough to turn his boss into an emotional wreck, so that he looses his job and Aram can replace him. The kidnapping goes off without a hitch and as he holds the poor girl in an abandoned warehouse, he soon finds himself at the top of his firm and living the good life. But one thing Aram didn’t count on, was having pushed Anabela far enough over the edge that she would figure things out and come after him with a bloody vengeance.

Flick is a bit offbeat as is Bogliano’s style and doesn’t really get intense till the last act. It is disturbing to see how thoroughly Aram plans out the abduction, to the point of even practicing his timing on his son and his restraint techniques on a hooker he frequents regularly. We certainly feel for Anabela as he holds her against her will in a rat infested building and takes unsettling…and inappropriate… videos and photos of her to turn her dad into a mess. This takes up the first hour of the flick and is fine, but the film really doesn’t take off till he releases Anabela thinking he has it made. He has a beautiful home, his secretary/lover (Pau Alva) set up in a nice apartment…and a really pissed off schoolgirl who figures things out and plans a far more vicious payback. This is where the film finally kicks into gear and one wishes this plot element was brought in a little sooner, as it really doesn’t seem like we are given enough time to savor Anabela’s brutal revenge…though we did need time spent to understand how a sweet kid got so violently unraveled. Aram’s cruel treatment of the innocent girl pales in comparison to the payback she exacts and there is some very brutal violence as the now psychotic girl turns the tables in a game of cat and mouse. Again, while the film is an economical 90 minutes, this segment could have used a bit more time as she turns the screws.

The film has a few obvious flaws. One of them is plainly that if Aram has the balls to kidnap a young girl..and cheat on his wife (Milena Pezzi) with a voluptuous hooker (Vita Vargas)…than why did he not have the stones to stick up for himself at work and demand his due? Why go through the whole kidnapping ordeal and involve an innocent girl?…just stand up to your boss! Also, where are the police during all this? The girl is kidnapped and held for what appears to be weeks and yet the cops are mentioned only in a brief throwaway line, after the fact. We never get to see them question the office workers to potentially see Aram squirm. Perhaps Bogliano thought this was too cliché…and he wouldn’t be wrong…but it seemed out of place that the police barely figure into the film till Anabela’s revenge has her breaking into Aram’s office to mess with him…then they show up. That and for a schoolgirl, the pushed over the edge Anabela proves quite the little terminator. While it’s disturbing and fun to watch, it’s also a little hard to swallow that she can easily take out two gangsters who have obviously killed before. We also never get a proper grasp of how much time lapses as Anabela  scopes out Aram to discover all his habits…like he did her…and secrets, like where he keeps his mistress and important files. It gives the last act a feeling of being rushed after taking so much time with the set-up.

The cast are all good. Francisco Barreiro’s Aram is a little bit of a contradiction as mentioned. He is a hard worker, but very meek in standing up to his boss or his wife, yet has the guts to cheat on that wife and stage a daring and mean-spirited kidnapping. The actor does a good job, though, especially when we get to see him squirm, as the tables are turned in the last act. Daniela Soto Vell also shines as a typical teen thrust into a horrible situation. We feel for her as she is held prisoner by Aram and we see her slowly crack. Then when a twist of fate sends her over the edge and on the path to vicious revenge, she is quite good as schoolgirl turned psychotic killer. Pezzi is good as Aram’s demanding wife and she plays it just low key enough to not send her into over-the-top cliché territory. Rounding out, Molina is solid as the boss/heartbroken father, Vargas is hot and sexy as Aram’s hooker lover and so is Alva as his secretary/mistress…which brings up another point…kinda hard to believe that bookish Aram was getting so many caliente mamas, if he can’t even ask for a raise.

Overall, this is a fairly entertaining flick with some disturbing moments, especially in the last act. The lead character is a bit of a contradiction, but Daniela Soto Vell’s Anabela impresses with her schoolgirl turned unbalanced killer. The kidnapping portion of the film is done well enough, though it is the last act where the film really ignites and we wish a little more time was spent with this portion of the story, too. There are some flaws in it’s story telling, but it still entertains despite that. Definitely worth a look, especially if you have enjoyed Adrián García Bogliano other movies