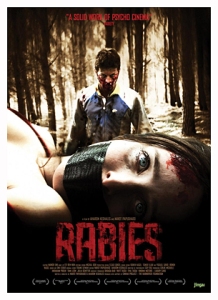 Rabies has the notoriety of being the first Israeli slasher flick and does put an interesting spin on the genre. The film opens with a brother and sister running away from home and coming across a serial killer stalking the woods. Soon more characters are fated to converge, including a forest ranger, two cops and four twenty-somethings. That’s where Rabies takes off from the generic serial killer flick it starts out as. Characters are soon meeting horribly brutal deaths but, not by the serial killer’s hands, but for various reasons, by their own. Whether it be jealousy, mistaken identity or self defense, the characters are split off into groups with their own stories going on and start offing each other quite brutally while the serial killer is sidelined. This may be the first slasher film where the actual killer doesn’t rack up any body count.

While the premise was quite interesting, and the turning the genre formula upside down was amusing to see unfold, Rabies sadly wore out its welcome long before it was over. After a while, the brutality and absurdity of the situations that always ended in violence just became tiresome. Film is from Big Bad Wolves directors/writers Ahron Keshales and Navot Paposhaddo, who have some clever ideas and work well behind the camera, but get a little too carried away with their own cleverness. Rabies stopped being suspenseful after about 1/2 hour in and then just bludgeoned the viewer with far-fetched and brutal scenes, losing any tension or impact they might have had, had the filmmakers not gone so overboard. Rabies is an interesting near miss and Keshales and Paposhaddo do show potential as filmmakers.