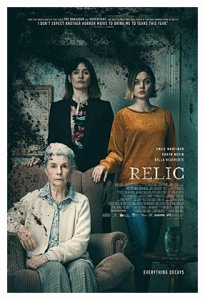 Australian flick finds Kay (Emily Mortimer) journeying to see her elderly mother Edna (Robyn Nevin) in her large, decrepit, old house in the countryside. Along with Kay is her daughter Sam (Bella Heathcote) and when they arrive, Edna is nowhere to be found. The house is a mold-filled mess and filled with ominous notes. When Edna does turn up, she can’t rememeber where she was and appears to be suffering from dementia. The longer the women stay with her, though, the more it seems there may be something else effecting Edna, as this house has a past that may still be haunting it.

As directed by Natalie Erika James from her script with Christian White, this is a very atmospheric, creepy and sometimes sad movie that may be a horror on the outside, but is also a tale about watching a loved one age and their health deteriorate. Sure there is something supernatural going on, with the tales of a cabin that once stood on the property and the ominous fate of past relatives, but it’s also a heart-touching drama about having to deal with watching someone you love approaching death. It works well as both and while it starts out as a slow burn, Relic turns up the scares and horror elements full blast for it’s intense and chilling last act. Maybe not everything is explained outright and it does evoke The Taking of Deborah Logan at times, but it works with some details kept ambiguous and it successfully spooks and scares, while also telling of a very real part of life we all must face. A very effective feature debut from Natalie Erika James, a talented filmmaker to keep an eye on. Flick is available on streaming networks from IFC Midnight.