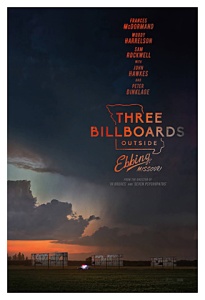 Intense drama tells the story of angry mother, Mildred Hayes (an amazing Frances McDormand), who sees, what she believes, to be a lack of effort on her local sheriff’s (Woody Harrelson) part in catching the man who raped and murdered her daughter, Angela (Kathryn Newton). In response, she puts up three billboards on the outskirts of her small town calling the police force out on their failings. This not only sets the town against her, as they sympathize with a sheriff dying of cancer, but also puts her, and those affiliated, in the cross hairs of his ignorant and hateful second in command, Dixon (Sam Rockwell).

Written and directed by Martin McDonagh, this is a powerful film, that not only illustrates what anger and hatred causes folks to do, but the consequences of those actions. The film is not really about Angela’s murder, but the effect it has had on her family and the town they live in, mostly on the rage coming from mother Mildred. The film also delivers some surprising transformations as the effects of all this anger and hatred changes people, some for the better, others for worse. McDonagh gets some fantastic performances out of his cast, especially McDormand and Rockwell and his script gives some intense dialogue and material for the cast to work from. Maybe the film isn’t perfect, one wonders if this town arrests anyone for anything at times, but it is a film that will stay with you long after the credits roll. Also stars Peter Dinklage, John Hawkes, Samara Weaving and Abbie Cornish.