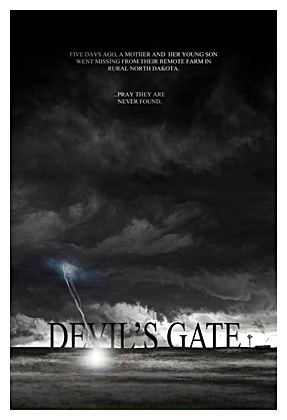 Flick finds FBI agent Daria Francis (Amanda Schull) traveling to the rural town of Devil’s Gate, North Dakota in search of a missing woman (Bridget Regan) and her son (Spencer Drever). Along with a local deputy (Shawn Ashmore), she decides to question the woman’s husband, Jackson Pritchard (Milo Ventimiglia), who is her prime suspect, even against the warnings of the local sheriff (Jonathan Frakes). Once at his remote farmhouse, Agent Francis discovers that those actually responsible for the disappearances may be something quite otherworldly.

Directed by Clay Staub from his script he co-wrote with Peter Aperlo, this is a sci-fi flick with severe X-Files envy. The film starts out intriguing enough with the death of a stranded motorist at the booby trapped Pritchard farmhouse and that Jackson has someone…or something…locked up in his basement. Once Agent Francis and Deputy Salter get there, we soon find that the basement’s occupant is definitely someTHING and what Pritchard claims to be demons are actually extraterrestrials. From here it becomes a routine alien movie of the Mars Needs Women variety with heavy doses of Mulder and Scully conspiracy theory. We’ve seen it all before, alien/human hybrids, abducted humans and captured extraterrestrials. After a decent start, this flick degenerates into a very routine, and sometimes silly alien abduction/conspiracy flick and not an all that great one at that. There is some entertainment here and Staub is a competent director, but it’s far too familiar to really make an impact.

The cast are fine enough. Schull makes a good FBI agent. She was tough and believable in the part. Ashmore and Frakes are solid as small town deputy and sheriff respectively and Ventimiglia is also fine as a simple farmer whose sanity we question. As for the extraterrestrials, their design and prosthetic representations are well done and effective, if not familiar.

Devil’s Gate can be amusing at times, but is too derivative to really grab you. The film is technically well done, but reuses too many plot elements from previous extraterrestrial films and TV series to really stand out. The initial opening catches ones interest, but once we find out we’ve seen a lot of this on the X-Files, it loses a lot of it’s momentum. 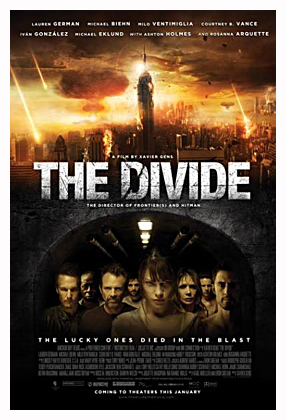 Xavier Gens (Frontier(s), Hitman) weaves this grim and violent tale of a group of survivors who are trapped together in a bomb shelter after a nuclear attack on New York City. The longer they stay cooped up in the shelter together, the more civilized behavior collapses and the worst in human nature comes out.

Divide is a well made film and Gans gets really good performances out of his cast, including Michael Biehn, Lauren German and Rosanna Arquette. He crafts a lot of tension and takes us and his characters through some very disturbing sequences as savagery takes over and atrocities are committed with growing ease. But despite how well Gans’ film is made, it is the nature of the story and the filmmaker’s willingness to indulge in it that weighs it down. The problem is we’ve seen this kind of civilization breakdown many times before and Gans spends a little too much time on the horrible acts that the characters commit on each other. After a while we start to become numb and a bit bored as a good portion of the two hour running time is a journey through the evils that men do. The constant bombardment of vulgar and repulsive behavior looses it’s effect and the last act is spent just wanting it to come to some sort of conclusion. And when that conclusion comes, we are already too weary to fully feel it’s bleak impact. There are some interesting segments too, including one that gives us an idea of just who has perpetrated the attack, which is quite chilling and we do have to give Gans credit for such a brutally realistic portrayal of such an event. The production value is high and the scenes of a nuclear devastated NYC are extremely vivid and horrifying which adds to the emotionally dark tone of the film.

A well done movie, but a bit too bleak and depressing for it’s own good. The film makes it’s point over and over and it is emotionally draining. Certainly was worth seeing, but not the kind of movie I’d want to watch again.