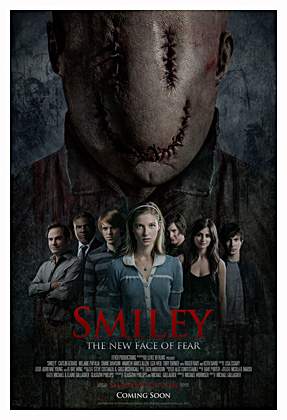 Smiley is a horror flick you wished you could like more because the makers seem to be trying really hard to deliver…but misses the mark a bit too much to be completely forgiving. The story centers on an internet urban legend of a serial killer named, ‘Smiley’. When you are on a video chat with someone, you’re supposed to type in ‘I did it for the lulz’ three times and Smiley will appear behind the person you are chatting with and kill them. College roommates Ashley (Caitlin Gerard) and Proxy (Melanie Papalia) give it a try one night and, to their horror, watch someone be brutally murdered before their eyes. Now good girl Ashley is convinced that Smiley will soon come for her and Proxy and even starts to see the faceless killer around campus. Is he real and is her life in real danger, or is Smiley all in the emotionally troubled girl’s head?

Written by Michael Gallagher and Glasgow Phillips and directed by Gallagher, this flick tries hard to be a sort of Scream meets Candyman for the internet age, but just doesn’t accomplish it’s goal. The whole Smiley legend seems a little too far fetched and silly to really grab us and Gallagher really doesn’t create any tension with it. Attempts to create enough doubt as to whether Ashley is imagining him, or if he really exists aren’t effective enough and that might have added some mystery and suspense to it, if we weren’t sure. Simply adding a Scream-like plot element that Ashley lost her mother and is still grieving, isn’t enough to make her an unreliable witness…that and more deaths occur, so we know something is up. Ashley also only starts to get a little unglued when she starts to see Smiley, otherwise she seems like she has her head on straight. The script is actually very talky, too with very little Smiley action. There are numerous, lengthy scenes in one of Ashley’s classes with her Professor (Roger Bart) waxing philosophical and none of the scenes really go anywhere or contribute to the story. They seem like time wasters to stretch out a thin script to feature length and the time would have been better spent trying to scare us with more Smiley. The opening scene with a pretty babysitter (Nikki Limo) is actually the best scene in the film and the flick never reaches that effectiveness again. There are a few gory deaths and the Smiley character himself looks effective, but he is never around enough to evoke true menace and the big reveal at the climax really comes as no surprise. It’s too bad, a tighter script and a far more capable hands behind the camera and this could have been a cool little flick. It’s few effective parts just don’t add up to a successful whole.

Our leading ladies are fine and probably would have been more effective with a better script and direction. Caitlin Gerard is a cute, but emotionally troubled girl-next-door as Ashley and we do like her. Melanie Papalia (Extraterrestrial, The Den) is pretty and spunky as party girl Proxy though, she seems like the stronger of the two for certain, though the script has her character being a little too unfazed by witnessing a murder and possibly being the cause. Bart is a bit eccentric as Professor Clayton, but his character really doesn’t contribute much and Shane Dawson is adequate as loner/nerd Binder, who Ashley falls for and asks for help getting to the bottom of this urban legend. A decent cast that work well with cliché characters and could have used better material.

The movie was OK. It’s not terrible, but it is far from succeeding in what it wants to do. You get the feeling the filmmakers were trying their best…there is nothing pretentious about it…it’s just they fell short. It has a bit of a charm, so you want to like it better, but it’s too weak to really embrace and enjoy thoroughly. That and the familiar elements aren’t used creatively enough to give it a total pass. Not a waste of time, but up to you if you want to spend that time checking it out.