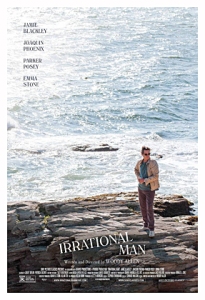 Odd flick from Woody Allen has philosophy professor Abe Lucas (Joaquin Phoenix) trying to find meaning in his life. When an affair with a married member of the faculty, Rita (Parker Posey) and a relationship with one of his students, Jill (Emma Stone) doesn’t help, he decides to murder a judge who is about to rule on having a woman’s children taken from her. He thinks he has committed the perfect crime and done some good, when it all starts to unravel as both his lovers begin to figure out whodunit.

As per the plot synopsis, this is a weird flick from Allen who has kinda been on autopilot for quite a few years now. The film is intriguing and has some quirky and eccentric characters, but starts to unravel in it’s last act just as the professor’s plan does. The whole notion that mild mannered Abe would just commit a random murder to give his life some meaning is a bit out there, as it is. It also seems a little too far-fetched that it would be both his lovers that start to put the clues together and actually come to believe Abe committed the murder, as it seems equally ludicrous that he would so easily conclude that he had to do it again to keep his lady loves silent. It’s one of those movie’s were it seems to be taking itself very seriously, but would have worked far better as a comedy, which it’s not, though it feels like it should be. Would also love to see Allen, for once, make a film that didn’t involve upper class elitists, that might be refreshing, too. 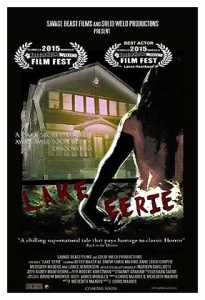 Written by and starring Meredith Majors and directed by husband and co-star Chris Majors, this is a little horror that may be too ambitious for it’s own good. Film has artist and recent widow Kate (Meredith Majors) moving into an old lakeside house. No one has lived there since the previous owner disappeared in 1969 and soon Kate starts to witness weird phenomena. Her research into the house reveals that the previous owner was an archeologist (Chris Majors) who may have discovered an amulet that could open dimensional portals. His notes indicate he may have entered one of these portals in pursuit of a banished Egyptian princess…you read that right…and Kate teams with her neighbor’s niece (Anne Leigh Cooper) to find the doorway and finally free the missing explorer.

I appreciate trying to do something a little different than the routine haunting, but this flick gets a bit convoluted long before the credits roll. The story mixes a haunting flick with something out of Tomb Raider and it doesn’t quite mesh together. The acting is also questionable from our leads and one thinks the writing/directing/producing couple should maybe have left the performances to more experienced actors than multi-tasking here. The film also doesn’t have the budget to really portray it’s alternate dimension, so it goes the Insidious route with staging it in the house with different lighting. It worked in Wan’s film, but here it just looks cheap. There is some nice atmosphere early on, but once the story starts to go all Indiana Jones meets Amityville Horror, it looses it’s grip. Yes, the attempt to do something more original is certainly admirable, but here a simpler haunting story might have been easier to pull off on a small budget and easier to swallow by the audience. Also stars Betsy Baker, who was Linda in the original Evil Dead and the incomparable Lance Henriksen in a small part as Kate’s concerned dad. 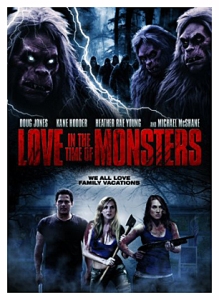 Written by Micael Skvarla and directed by Matt Jackson, this is a fairly unremarkable and only mildly amusing horror comedy. The story has sisters Carla (Marissa Skell) and Marla (Gena Shaw) heading to a family getaway lodge to meet up with Carla’s fiancé Johnny (Jade Cater) who works there. Toxic chemicals dumped in a nearby lake start to turn the forest life and a few of the employees, including Johnny, into zombies. Now the girls and the survivors must band together and fight for their lives…oh, and there is a Sasquatch mixed in there, too.

Sure, the girls are hot and there is a lot of gore, but aside from having the zombified lodge employees dressed in Sasquatch costumes, this is another routine zombie outbreak comedy. Most of the humor falls flat and the acting and dialog are equally sub-par and that would be OK if the flick were witty and had more of a devious sense of fun, like the similar Zombeavers. There are a few amusing bits, but aside from an actual Sasquatch appearing in the last act to take on the zombified animals and people, there is little to set this flick apart from all the other by-the-numbers zombie comedies.