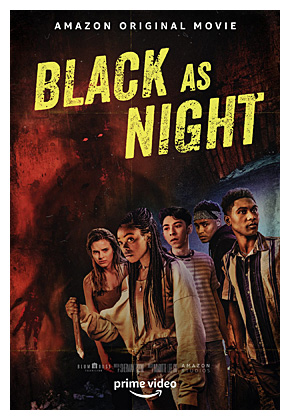 Vampire flick premiered on Amazon Prime this past weekend as part of the new Welcome to the Blumhouse series. It takes place in New Orleans in the rundown housing project of Ombreux, where folks are suddenly disappearing. When teenager Shawna (Asjha Cooper) is attacked and bitten and her mother is turned, Shawna realizes vampires are preying on the locals. Determined to save the Ombreux and those who live there, Shawna and best bud Pedro (Fabrizio Guido) set out to hunt down and destroy the master vampire (Keith David).

Flick is directed by Maritte Lee Go from a script by Sherman Payne. It has it’s heart in the right place, covering some socially relevant topics such as gentrification of urban neighborhoods and the effects of Hurricane Katrina on people of color, fifteen years later. The film makes good use of the New Orleans locations, and has some fun moments and entertaining action sequences as Shawna and friends turn vampire killers. Where the film falters, is as a vampire movie it’s very routine and could have been more energetic. The similar Vampires vs, The Bronx handled similar socially relevant themes, but was much more fun and effective as a vampire flick, too. Sure it’s great to see Keith David as a master vampire and his purpose fits in with the film’s themes, but it’s all very 90s Buffy—not that there’s anything wrong with that—but without the pop culture wit. Bronx’s gentrifying vampires were more fun, as were it’s spunky vampire fighting kids. Cooper and the cast all perform well, but well-intended social messages aside, we just wish Black as Night was simply more bloody fun.