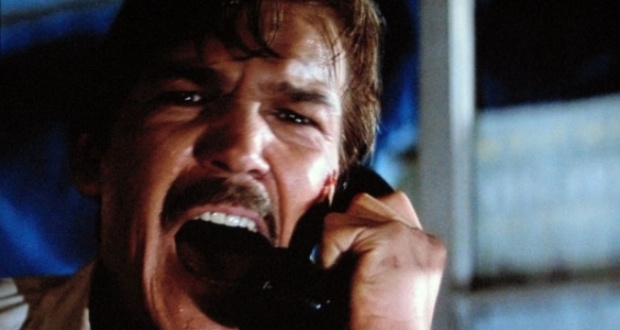 Watching horror flicks during the Halloween season, there might be one face, aside from Karloff, Lee and Lugosi, that you might see more than once…and that familiar face is Tom Atkins. A cult favorite actor, Tom has appeared in a number of horror classics…especially during the 80s. So, in honor of this unsung hero of horror, here are 10 horror flicks that illustrate why it’s not Halloween without Tom Atkins!

(Click on the highlighted titles below the movie poster gallery to get to our reviews of the flicks covered here at the Movie Madhouse!)

4. Halloween III: Season Of The Witch

5. Night Of The Creeps 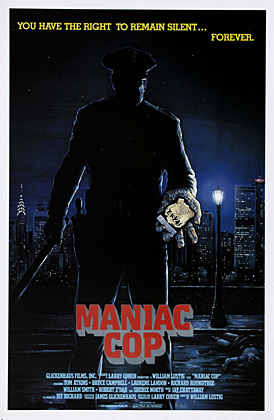 If anything can be said about this late 80s slasher, it is that it contains a virtual who’s who of 80s/genre icons both before and behind the camera. Produced by James Glickenhaus (The Exterminator, Shakedown), written by Larry Cohen (It’s Alive, Q The Winged Serpent) and directed by William Lustig (Maniac), while starring Tom Atkins (The Fog, Halloween III), Bruce Campbell (Evil Dead), William Smith (The Ultimate Warrior), Richard Roundtree (Shaft), Laurene Landon (All The Marbles) and started the career of genre favorite Robert Z’Dar… an impressive list. And while the film doesn’t quite live up to the potential of the sum of it’s makers and cast, it is a fun slasher made at a time where the 80s slasher genre had pretty much run it’s course and this flick is among some of it’s last gasps before Scream brought the slasher back as the subject of pop culture nostalgia 8 years later.

Maniac Cop is set in NYC and tells the story of a murder spree that is being committed by a large hulking assailant dressed liked a police officer or, worse yet, actually is a police officer. This killer is being hunted by Det. Frank McCrae (Atkins) who can’t seem to get a lead till fellow officer Jack Forrest (Campbell) is framed for the villain’s handiwork, with the murder of Forrest’s own wife. McCrea knows the cheating Forrest was with his mistress, Officer Theresa Mallory (Landon) at the time and begins to suspect the killer is indeed a cop getting information from the inside. What’s more, the man he suspects, Officer Matt Cordell (Z’Dar), a once hero cop sent to prison for rights violations to keep him from exposing city officials, was supposedly murdered in prison by vengeful inmates. If proving Forrest’s innocence is not hard enough, he now has to prove that the real culprit is a man long believed dead.

NYC set slasher is directed fairly by the numbers by William Lustig but, Larry Cohen’s script is filled with his trademarked sly humor and doesn’t take itself too seriously. It’s definitely a bit livelier then Lustig’s cult classic Maniac was though, far less gruesome. It’s not one of the best of the 80s slashers but, is entertaining and has enough gore and action to make it a fun nostalgic watch, especially when one sees NYC landmarks and once famous night spots that are no longer there. The plot, if thought about, makes little sense. While Cordell may have suffered brain damage when assaulted in prison, it still doesn’t make too much sense that he now preys on innocent civilians when he was once a dedicated cop. But, there is a deviation with him wanting to kill those responsible for setting him up and at one point, he decimates a precinct full of fellow officers whom he may feel betrayed him and it is an 80s slasher so, very little inspiration is needed for a killing spree and like other flicks of it’s kind, you just go with it. The film is well produced and looks good and there is some effective gore though, not as much as one might expect. The pace is rather brisk and there is an effective score by another genre favorite Jay Chattaway (Missing In Action, Star Trek: TNG).

And if nothing else, it’s great to see the cast in action. Atkins chews up the scenery as only Atkins can but, still takes the subject matter seriously so we do too. Campbell is actually playing a straight hero type here, though he spends a lot of time incarcerated and in cuffs while the perky and leggy Landon tries to free him and get him out of Cordell’s grasp. Not sure why Cordell wants his patsy dead but, like I said, go with it. The rest of the genre vets have lesser roles but, Smith and Roundtree add some nice character to their small roles. And Z’Dar may have no dialog but, cuts an imposing figure as the vengeful cop whose basically Michael Myers in a police uniform… but, it works and Z’Dar is a perfect fit for the badge and night stick. The cast go a long way in making this one a fun viewing.

So, while Maniac Cop is not a prime example of it’s sub-genre, is a fairly entertaining one and the cast of familiar B-movie faces makes it fun to watch as does the nostalgia of 80s NYC. It isn’t very stylish but moves quickly and has it’s share of well executed gore and stunts. Not among my favorites but, does have personal nostalgia from seeing it at the long gone Hyway Theater in Fair lawn, N.J. which showed a lot of B-movies like this back in those days.

CAUTION: The trailer does show a lot of spoiler-ish scenes if you haven’t seen this cult classic yet.