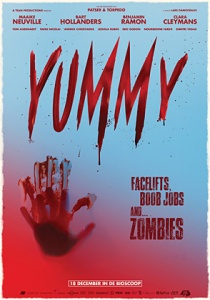 Belgium zombie comedy has Michael (Bart Hollanders) taking his girlfriend Alison (Maaike Neuville) and her mother Sylvia (Annick Christiaens) to an obscure clinic to have plastic surgery. There is some kind of strange experimentation going on there and when Michael releases a patient (Louise Bergez) he finds bound to a stretcher and muzzled, he unleashes one of the side effects of said experiments, a flesh-eating zombie. Soon Michael and company are trapped inside the hospital surrounded by hordes of hungry undead.

Flick is directed by Lars Damoiseaux from his script with Eveline Hagenbeek. There is nothing new here zombie flick-wise, but the film does have a manic energy during it’s action sequences and the expected gore is abundant and well done. There are some funny bits, a flaming penis gag being one of the standouts, and it doesn’t overstay it’s welcome at only 88 minutes. There are a few spots where the film stops dead…pun might be intended…for exposition, but otherwise it’s fast paced and can be bloody fun at times. If anything, it never tries to be more than it is. Nothing new, but an amusing zombie comedy if you aren’t burnt out on this overrun sub-genre.