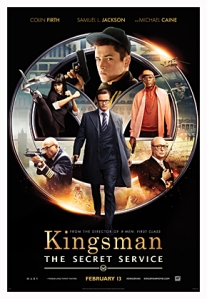 Mildly amusing spy spoof is based on a comic book by Mark Millar and directed by Matthew Vaughn, as was the cult favorite Kick-Ass. The film follows a group of British Secret Service operatives known as the Kingman and one agent, Galahad’s (Colin Firth) efforts to thwart the evil plot of megalomaniac villain Richmond Valentine (Samuel L. Jackson), with the help of new recruit, Eggsy (Taron Egerton). There are some fun over-the-top action sequences and playful nods and jabs at spy films and Britain’s most famous agent in particular, but the film never really takes off as a comedy and never really grabs with it’s hyper violent, CGI enhanced action scenes. Sometimes the film just doesn’t seem to know what it wants to be…spoof, or actual spy film. The graphic violence also clashes with it’s more playful tone, giving the film a schizophrenic quality. The cast are charming enough, though Jackson’s Valentine does get annoying after a while, as played as an overzealous man-child. The FX are top notch and the plot would fit any of the lower tier Bond films. It’s just that the humor isn’t quite funny enough, in paying homage it doesn’t give us anything new and, overall, it winds up being exactly the type of mid-level spy movie it’s supposed to be playfully poking fun at. A harmless enough watch, but almost as forgettable as some of the lesser efforts it spoofs…save a certain show-stopping church set action sequence played-out to “Freebird”. Also stars Mark Strong and Michael Caine.

Faux documentary from Jabbar Raisani is never for one moment successful at feeling like anything, but a staged, scripted film. The story takes place in the near future where an alien invasion of Earth has been repelled and now outposts have been set up around the world to clean up the left behind alien soldiers, known as “Heavies”. The film focuses…through the eyes of two cameramen…on the troops in one of the last outposts on the Pakistan/Afganistan border, who are under fire by aliens and locals alike. The flick grows tiresome quickly, as it is filled with and overplays every war movie cliché it can muster. The characters are all blandly acted stereotypes, who give the same gung-ho speeches and mournful soliliquies we have heard in every war movie since the 40s. Adding aliens to the mix adds nothing new. There are also numerous and huge plot holes such as, if the alien’s have mind-control abilities, why didn’t they use them in the initial conflict and why would the world’s governments make such a half-assed effort to clean out the remaining aliens, who are clearly still a threat…other than to add drama to this movie. There are some nice FX and the aliens are portrayed effectively, but aliens aside, this is nothing we haven’t seen before and much better. 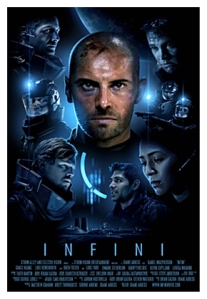 Australian Sci-Fi thriller may have some very familiar elements, but is an entertaining enough flick. Story has an incident occurring on a far-off mining colony and a search and rescue group going there to collect a sole survivor (Daniel MacPherson) and stop the plant from further processing. What they find is an alien life form capable of taking over other lifeforms in order to evolve…and with gruesome and violent results. Sure Shane Abbess’ chiller plays a lot like a combination of both John Carpenter’s The Thing and Ghosts Of Mars but, it’s fairly entertaining despite the similarities and does take it’s familiar story in an interesting direction by the time the credits roll. The film is rather moderately paced and has a few tedious spots, but the FX are top notch and the acting is pretty good for this type of flick. Avoids some of the cliché and does give us something to think about once it concludes. Also stars Luke Hemsworth and Grace Huang. 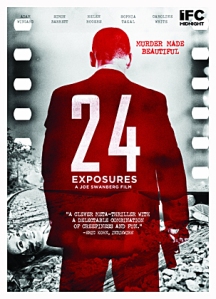 Odd and unsatisfying thriller has a troubled police detective (Simon Barrett) investigating a series of murders and questioning a fetish photographer (Adam Wingard who directed The Guest) who worked with a couple of the victims. The two form an odd bond as the investigation continues. Yea…that’s kinda it. I found this thriller rather pointless and dull. Writer/director Joe Swanberg seems more interested in giving his fellow director buddy Wingard opportunities to make-out with and enact sex scenes with multiple women than he is in actually telling a story. Ironically, when Barett’s cop character tries to sell his experiences as a book, he’s told that the characters and story aren’t compelling enough and there are too many loose ends…kinda like this movie. Also, instead of patting each other on the back by giving each other acting roles, this pack of filmmaker buddies should keep egos in check and hire real actors…just a suggestion.

Another Tarantino wannabe thriller that has a hip soundtrack, spurts of graphic violence and a story told out of sequence with dark humor. This time the wannabes are writer James McFarland and Aussie director Kriv Stenders. They deliver the story of hired killer Charlie Wolf (Simon Pegg) who is being payed by a ruthless husband (Callan Mulvey) to murder his cheating wife, Alice (Alice Braga). Unknown to Charlie, a conniving couple (Theresa Palmer and Sullivan Stapleton) are planning to kill her, too, in an insurance fraud plot…but Alice has other ideas. Add in a dirty cop (Bryan Brown) and a lovesick mechanic (Luke Hemsworth) and things get complicated and bloody fast. Flick isn’t terrible, it’s just that it’s style is so familiar at this point and a good deal of it is predictable because so many have already tried to be the next Quentin Tarantino and we know what to expect. Pegg seems to be having fun in more of a tough guy role, but the proceedings in flicks like this have just become so passé and it never reaches the cleverness or the manic energy of the filmmaker whose work is being emulated. OK at best. 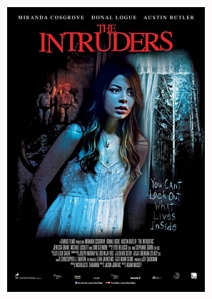 The Intruders is a completely derivative and familiar story of a emotionally troubled girl named Rose (Miranda Cosgrove) who moves into an apparently haunted house that wants something from her. Obviously her recently widowed father (Donal Logue) thinks it’s all in her troubled head and no one believes her that something may be in the house with them. So, she begins to investigate. Add in alleged disappearances and suspicious neighbors and you know where this is going. Thriller isn’t badly directed, as by Adam Massey, it’s just that Jason Juravic’s script is loaded with been-there-done-that. The only thing that elevated this for me out of the incredibly familiar and mundane material was that Cosgrove is actually quite good, despite being surrounded by clichés. In a much better film, the former Disney Channel actress could be quite an impressive final girl. Also stars Tom Sizemore as the suspicious neighbor and Austin Butler as the stereotypical nice guy hunk with a soft spot for pretty, damaged girls. Up to you.