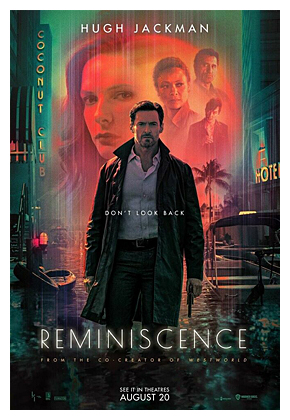 Reminiscence tells of a near future Miami where global warming has raised the ocean levels to the point of leaving Florida’s now flooded hot spot looking more like Venice, Italy. In this water-logged city operates private investigator Nick Bannister (Hugh Jackman) who uses technology to help folks find their lost memories. Nick soon finds himself in need of his own skills, when he falls in love with a client named Mae (Rebecca Ferguson) who then disappears. Nick begins searching his own mind and the minds of others to track her down, but he might not like what he finds.

Flick is written and directed by Westworld’s Lisa Joy and is a Blade Runner-esque mix of science fiction and film noir detective story. Jackman’s Nick Bannister is very much a noir private eye type, as his search for femme fatale Mae gets him in a lot of tough spots and uncovers a conspiracy involving kidnapping, drugs, high-society, criminal activity, betrayal and murder. It’s an entertaining enough 116 minutes and Jackman makes a fine film noir style hero, as does Ferguson make a fine femme fatale when onscreen. The reveals and resolution were a bit of a letdown and a little too cliché, but the bittersweet finale is oddly fitting and effective. Nothing special, but does pass the time entertainingly enough if you go in with moderate expectations. Flick was released simultaneously in theaters and on HBO MAX.