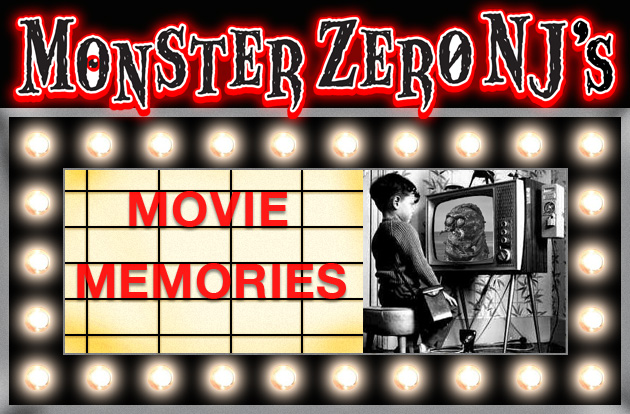 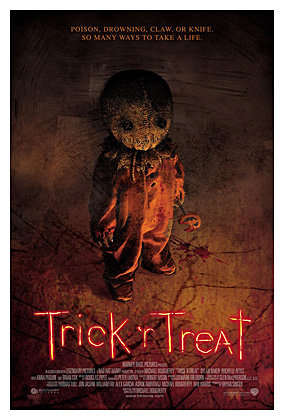 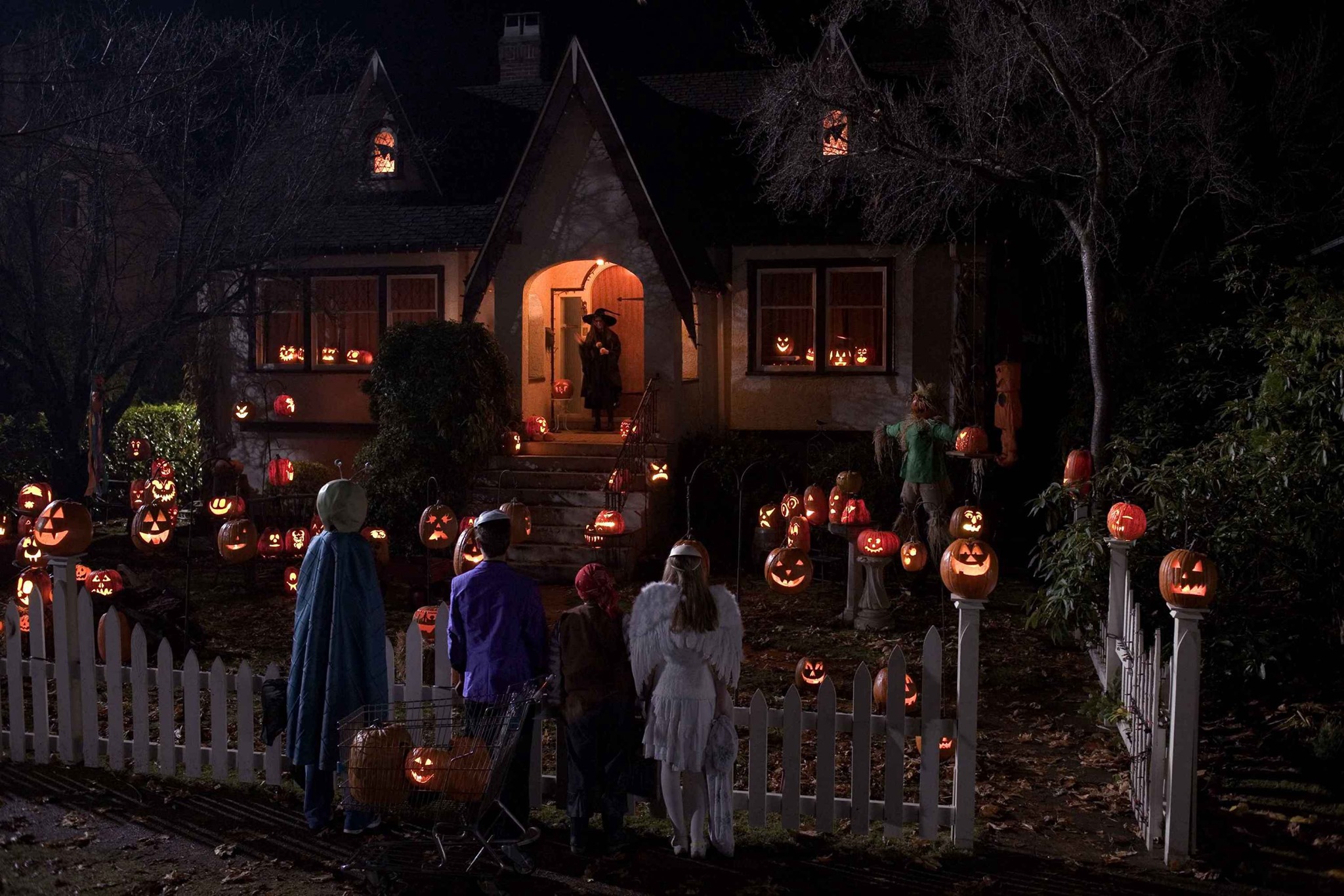 After 15 years, cult classic Trick ‘r Treat finally gets a theatrical release in time for Halloween!

Trick ‘r Treat was released direct to home media by Warner Bros in 2009 after first showing at a Texas film festival two years earlier and then some sporadic festival showings over the next two years. Like everyone else, I discovered this great Halloween movie on DVD. Since then, it’s become a beloved holiday classic. Now fifteen years after its festival only showings, Michael Dougherty’s cult favorite has finally gotten a theatrical release at AMC theaters right in time for All Hallows Eve. One of my favorite spooky season flicks, I took in a showing tonight and it was magical seeing it on the big screen for the first time…even though I have watched it dozens of times by now. 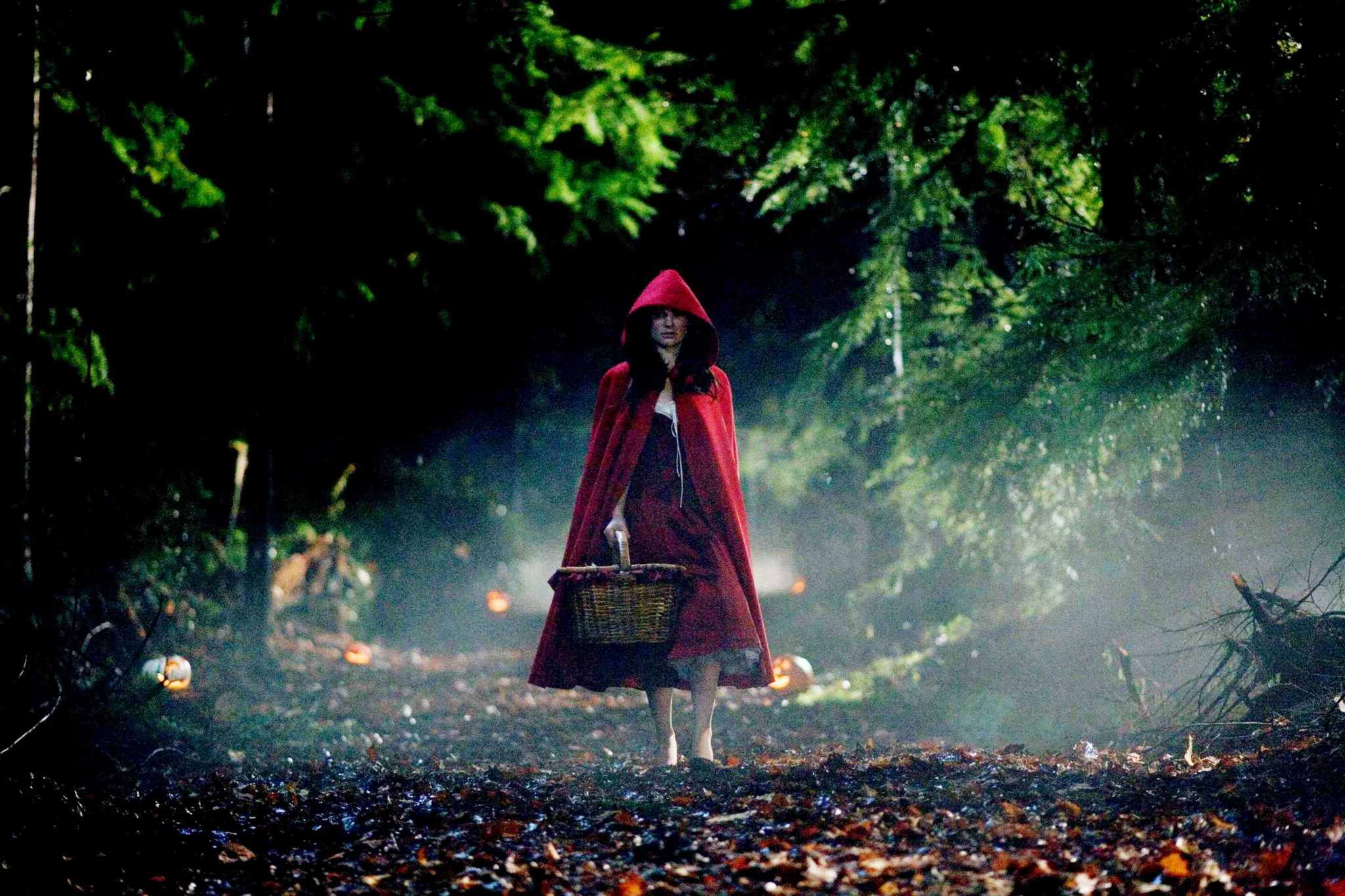 Ticket was only five dollars to start! It was a good print with vibrant colors and great sound bringing the lush Halloween visuals and spooky screams to vivid life as never before. Don’t care how boss your home theater system is, there is nothing like seeing it on the big screen with an appreciative audience. Everyone was quite during the showing, save for the appropriate laughs or gasps, depending on the goings on. Seeing Sam and company larger than life was a great experience tonight and one I am so thankful that the folks at AMC provided. Better late than never! A great Halloween movie now getting its proper due! Was like seeing the film for the first time and I’m so glad I went! 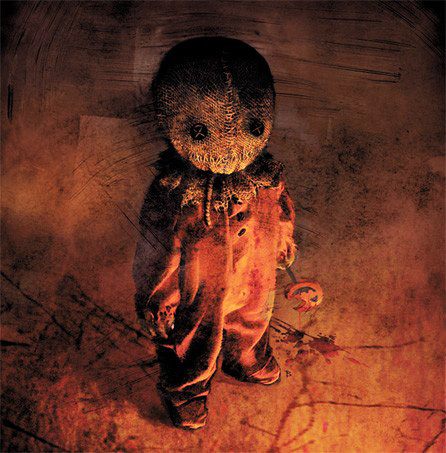 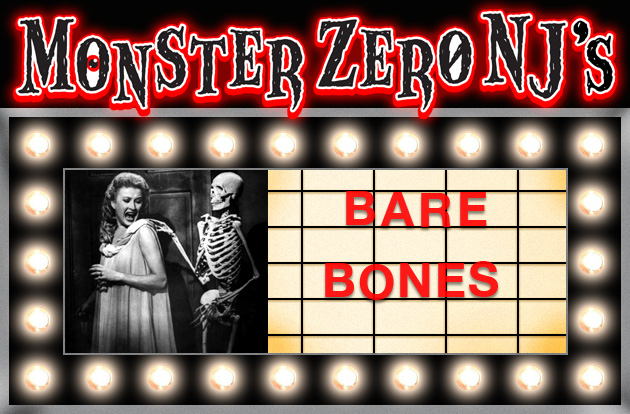 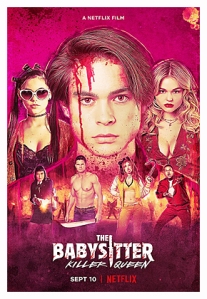 Netflix original movie sequel takes place two years after the events of The Babysitter with no one believing Cole (Judah Lewis) about his fight for life against his homicidal, cultist babysitter Bee (Samara Weaving). Cole’s trying to get past the trauma of that night, but his clueless parents (a returning Leslie Bibb and Ken Marino) want to send him away to a psychiatric academy and the only one who believes him, is his best friend/crush Melanie (Emily Alyn Lind). His gal pal suggests coming with her to a party at a lake, where all hell breaks loose…again…as familiar faces return for blood.

Horror/comedy is again directed with an over-the-top style by McG from a script by he, Dan Lagana, Brad Morris and Jimmy Warden. Also returning, aside from most of the cast, is the hip sense of humor, pop culture references and gallons of blood, once things get restarted. In a way, it is a bit of a retread, with virginal Cole once again thrust into danger, as new enemies and ghosts from his past conspire to make him a sacrifice once more. There are some fun betrayals and reveals and at least, this time Cole has an ally in new bad girl Phoebe (Jenna Ortega). The dialogue is again snappy and once more the flick likes to have fun with the familiar tropes and traditions, with the outdoor setting opening things up a bit. It may be more of the same, but it’s still fun and the returning cast all seem to be having a blast, as are the new faces. The formula does start to wear a little thin by it’s last act and the flick could have been a bit tighter with maybe an additional ten minutes or so trimmed. It does end satisfyingly and with a few nice twists, that sort of wrap up the story. It may not quite be an equal, but it is a fun enough second go around and an entertaining watch on the couch. As for Samara Weaving’s Bee making an appearance…you’ll have to stream this on Netflix to find out. Watch through the entire credits. 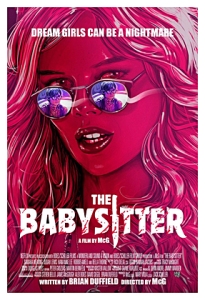 Netflix original movie finds nerdy twelve year-old Cole (Judah Lewis) spending the weekend with his hot babysitter Bee (Samara Weaving from Ash vs Evil Dead season 1) when his parents go away. The much picked-on tween thinks his got it made, until he wakes up one night to find Bee and her friends murdering another teen for some satanic ceremony. Now Cole has to somehow survive the night as his once beloved babysitter and her friends find out he knows too much.

Horror/comedy is directed with an over-the-top style by McG (Charlie’s Angels, Terminator: Salvation) from a script by Brian Duffield and is a lot of fun. It’s got a hip sense of humor and has a good time with some of the clichés of the horror genre, while spilling quite a lot of blood in giddy fashion. Cole and Bee actually have a very sweet friendship, especially considering how Cole is treated by his peers and it makes it much more effective when she turns all “big bad” on the kid. It’s fun to watch Cole uses his cleverness to evade and sometimes unintentionally off Bee’s fellow cultists and even if it’s not the most original story, it has fun with it’s oft told premise. The cast are having a good time here and Weaving makes a solid femme fatale, as much as, Lewis a charming young hero. A fun 90 minutes of blood, pop culture references and playfully poking the horror genre in the ribs. Also stars Leslie Bibb and Ken Marino as Cole’s oblivious parents and Robbie Amell and Bella Thorne as two of Bee’s sinister group. 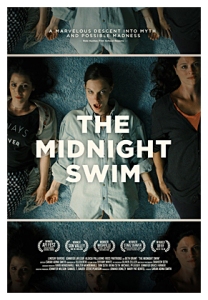 Found footage flick has three sisters reuniting at their family lakeside home to mourn the drowning death of their mother with sister June (Lindsay Burdge) documenting it. The aptly named Spirit Lake  is said to be bottomless and there is a local legend about The Seven Sisters, who all drowned one night in the lake trying to save each other as they were each in turn dragged under by some force. With some strange occurrences happening while they stay there, the three women start to believe that their mother’s death was possibly not an accident and there might have been something more supernatural involved.

As written and directed by Sarah Adina Smith (Holidays), the film has some spooky moments, but focuses more on the drama between the three siblings, which isn’t anything we haven’t seen before in this kind of indie drama. There is also no real reason for this to be a POV movie and sometimes it works against the more drama intensive narrative. When the film delves into the more supernatural possibilities, it is more interesting and more effective, though it doesn’t do that often. When the three sisters are reminiscing about their mother and revealing inner pain and such, it just becomes another routine indie family drama. An interesting curiosity, with some spooky moments, but nothing that one needs urgently see. Also stars Jennifer Lafleur and Aleksa Palladino as the other sisters, Annie and Isa. 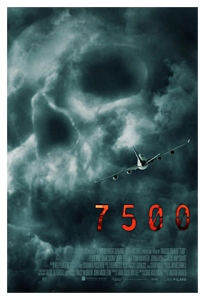 Story has a flight to Tokyo, Japan experiencing some very strange and deadly supernatural phenomena. When a passenger dies of a sudden seizure, it seems to unleash a mysterious force that begins to stalk the plane and starts killing the passengers. A group of passengers band together to try to find out what is going on and stop it.

Disappointing flick from Takashi Shimizu, who wrote and directed the 90s J-horror classic The Grudge and it’s very effective sequel. It plays like a 70s B-movie disaster flick complete with a cast of cliché characters played by B-list actors like Leslie Bibb, Amy Smart, Jaime Chung, Johnathon Schaech and Halloween’s ScoutTaylor-Compton as a goth chick. It’s basically a very silly film that gets more and more silly as it goes on and evoked memories of a very similar and equally silly 1973 TV movie called The Horror At 37,000 Feet with William Shatner. It’s not all Shimizu’s fault, as it is written by Craig Rosenberg and not one of his own scripts. Given the Japanese director’s track record for creepiness, though, you’d at least expect it to be somewhat spooky. Let’s not even mention the ludicrous and cliché ending. Had a moment or two, but sadly is another example of a Japanese director working for an American studio on a project that is an insult to their talents. Now we know why this has sat on a shelf for two years. 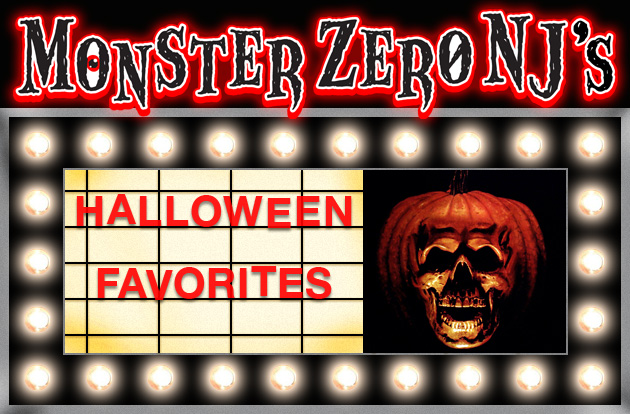 Trick ‘r Treat has already become an instant cult classic and it makes it’s rather odd release by Warner Brothers and Legendary Pictures all the more a mystery. The film was originally supposed to come out in October 2007 for Halloween, but a major release never happened and it was only shown at a few film festivals and then was finally dumped direct to DVD two years later in October 2009, despite favorable reviews and good word of mouth. But the movie has been discovered by horror fans and has quickly become a Halloween favorite for many… it’s definitely one of mine. So, not sure what the studios problem was with this great little Halloween flick, but at least it is finally getting the attention it deserves and has earned a well respected status in the genre.

Trick ‘r Treat is a ghoulishly entertaining anthology that tells a group of stories that are unleashed upon it’s audience in a Pulp Fiction-like narrative structure that goes back and forth in time linking them all together and they are all presided over by spooky new horror icon Sam, who watches from a distance or becomes directly involved as in the first and final tales. We get the story of a young husband and wife (Tahmoh Penikett and Leslie Bibb) who find out certain Halloween traditions are there for a reason, the tale of a school principal (Dylan Baker) with a gruesome Halloween hobby that may come back to bite him, a group of kids investigating an urban legend about the murder of a busload of Special Ed. students with horrifying results, Anna Paquin playing a young woman about to lose her virginity in blood curdling fashion and the final tale about a grumpy and mean old man (Brian Cox) who is tricked and treated on Halloween night by Sam himself.

Written and directed by Michael Dougherty we get a movie that understands that Halloween should be spooky, scary and ghoulish fun…and Trick R Treat is all those things, a movie that embodies the spirit of Halloween as few others apart from John Carpenter’s classic have. The film is thick with atmosphere, stunning cinematography by Glen MacPherson, top notch gore and make-up FX and plenty of frights and delights. The cast all take their parts seriously and play them with exactly the right tone needed in the context of their story, making it all work perefectly in the Halloween spirit it is intended and evil little imp Sam is the spooky icing on the ghoulish cake.

A real Halloween treat if ever there was one. Trick ‘r Treat is now part of my Halloween watching tradition alongside Carpenter’s legendary fright fest and one of my all time favorite Halloween season films!