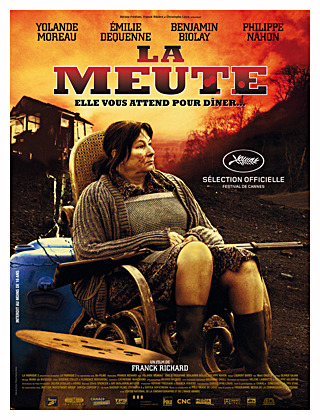 French horror The Pack (La Meute) proves that even in France, picking up a hitchhiker in a backwoods area can only lead to trouble. Young, pretty Charlotte (Émilie Dequenne of Brotherhood of the Wolf) is driving through a very rural area of the French countryside when she picks up hitchhiker, Max (Benjamin Biolay), to give herself some company after being accosted by a group of sleazy bikers. While she’s asleep, Max stops at a secluded truck stop run by a woman named La Spack (Yolande Moreau). It’s a strange little place and after another encounter with the biker gang, Max disappears. Charlotte goes looking for him and finds that not only is the young hitchhiker La Spack’s son, but she’s been set-up to be their prisoner…and what the duo have in store for her is beyond her wildest nightmares. The Pack needs to be fed and Charlotte might be their next meal.

Written and directed by Franck Richard, The Pack is a gruesome, disturbing and sometimes very effective, if not familiar, little horror. It’s got a cool visual style, some well-orchestrated gore and effectively creepy title creatures. Sure, we have seen these elements before and the basic story of a traveler getting involved in some backwoods horror is quite common, but Richard does present it fairly well. Our creatures are not directly explained, nor is La Spack’s need to feed them, though it is implied that something strange occurred in a mine where her sons were killed….or were they transformed into something unearthly? It’s not spelled out and that may frustrate some, but there is enough there for one to come to their own conclusions and at the very least, feeding them keeps them away from her and her son. There is also a sub-plot about a retired cop (Philippe Nahon) poking his nose around La Spack’s truck stop in relation to the missing Charlotte, but we all know how story threads like that get wound up. This is not a great or original flick, nor is it really scary or overly suspenseful, but it does work on a basic level and the atmosphere is aided by an effective score by Chris Spencer and Ari Benjamin Meyers and there is some moody cinematography by Laurent Barès. Not everything works…like the biker gang showing up conveniently three times, or that no one has noticed the disappearances in the area…or the monsters, for that matter…but it is an entertaining flick from the French horror renaissance of the first decade of the 2000s.

The cast are serviceable. Émilie Dequenne makes for a strong-willed and defiant heroine. Her tattooed, leather jacket wearing Charlotte is a far cry from the proper noble woman she played in Brotherhood of the Wolf. She’s a fighter and an asskicker here and there are hints that she is running away from an old life/relationship and trying to start anew. Moreau is effective as the sort of cross between Leatherface and the Sawyer family patriarch from Chainsaw Massacre. Her motives aren’t 100% clear as to her killing innocents to feed The Pack, but there is something a bit maternal about it and we wonder if her sons weren’t killed, but the deaths are a cover-up for some sort of transformation from miner to monster. That being the case, one wonders why it was covered up, yet nothing done about the monster population in the area. Back to the cast, Biolay is fine as the soft spoken Max, who takes a liking to he and his mom’s latest victim and Nahon makes for a good ex-cop who can’t let old habits drop. A decent cast.

The Pack isn’t a great movie from a country that has made some surprisingly good horrors during the last decade or so. The story elements are very familiar and there are certain plot ambiguities concerning our title creatures. Are they monsters unleashed from the bowls of the earth, or men transformed by something they unearthed? Who knows? It is an effective little flick, though and definitely passes the bloody time for a lazy horror filled Saturday night on the couch.