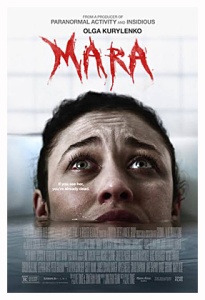 Police psychologist Kate (Olga Kurylenko) is trying to determine if a woman named Helena (Rosie Fellner) brutally murdered her husband in their own bed. Helena claims her husband was being stalked by a demonic entity, but police detective McCarthy (Lance E. Nichols) thinks she should be locked up one way or the other. Kate’s investigation starts to reveal a series of similar deaths that may be linked to a sleep demon called Mara (Javier Botet) and worse yet…Kate might be next.

Very similar to the 2016 Dead Awake with Jocelin Donahue, which also involved sleep paralysis and a dream stalker, but this flick does right a lot of what that movie did wrong. Mara is a good example of how a skilled director, in this case Clive Tonge, can take very familiar story elements and make an entertaining and effective movie out of them. Jonathan Frank’s script offers nothing we haven’t seen before in films like A Nightmare on Elm Street and Mama (ironically also played by Javier Botet), but the film is atmospheric and gives us some nice chills thanks to Tonge’s good use of these familiar dream demon tropes. Olga Kurylenko portrays a strong and likeable heroine to emotionally invest us and there is also a sympathetic turn by Doomsday’s Craig Conway as a war vet who’s crossed paths with Mara and is desperately wanting to be believed. Mara herself is a bit of a routine boogie man (boogie woman?), but she is utilized well enough. There is nothing new or inventive here, but there is some effective direction and good performances to turn the familiar into spooky entertainment.