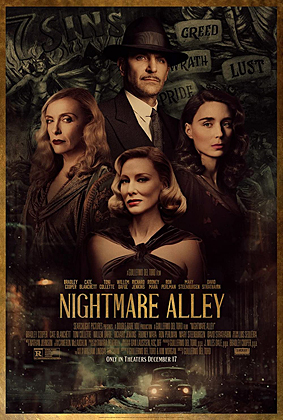 Del Toro’s latest is a remake of the 1947 film which is based on a book by William Lindsay Gresham. The story takes place in the early 1940s and finds man-with-a-secret Stanton Carlisle (Bradley Cooper) joining a carnival troop to survive hard times. There, he befriends a couple who perform feats of clairvoyance (Toni Collette and David Strathairn) and falls for the pretty Molly (Rooney Mara). He takes what he learns from the couple and leaves with Molly to start his own act that soon finds him the fame and fortune he seeks, conning the rich and gullible. When that is not enough, he tries to con the wealthy Ezra Grindle (Richard Jenkins), enlisting the help of Grindle’s femme fatale psychiatrist Lilith Ritter (Cate Blanchett). This may be one con, however, where the hunter becomes the hunted.

Crime thriller is directed by Guillermo del Toro (Pan’s Labyrinth) from a script by he and Kim Morgan, based on Gresham’s book. It is a beautifully shot movie and very well made. The first hour is basically the set-up, then the second and third acts find Stanton and Molly as a grifting clairvoyant couple and thus leads to Stanton’s attempt to pull his biggest con yet, using a personal loss and pain to bilk Grindle out of a lot of his money. Then there is the mysterious Lilith Ritter, who seduces Stanton and may even be conning the con artist. It is very well directed and methodically paced and as with all of del Toro’s films, has its moments of brutal violence when things start to go bad. There is a wonderfully eclectic cast, also including Ron Perlman, Willem Dafoe and Mary Steenburgen, with Cooper and Blanchett doing some of their best work. It’s an old-fashioned film noir with some contemporary touches and is sumptuously shot as with all del Toro’s movies. Very entertaining, if you get what the director is going for, though at this point, it also doesn’t seem like a film that one would necessarily need to continually revisit like some of his previous flicks.