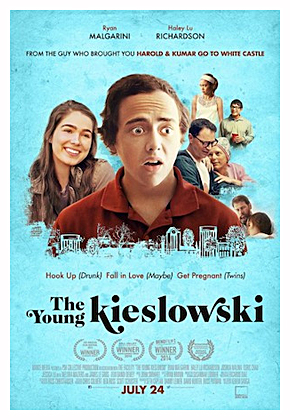 Indie comedy/drama finds nerdy college virgin Brian Kieslowski (Ryan Malgarini) going to a party one night and meeting adorable and opinionated also virgin Leslie Mallard (Haley Lu Richardson). After some awkward drunken moments, Brian and the young woman hook up. Weeks later Leslie finds out she is pregnant and with twins and wants to keep them, as she is Christian. When confronted with this news Brian, who is currently dealing with his mother’s (Melora Walters) terminal cancer, tries to appear supportive, but is actually quite terrified and the turmoil begins as they travel to tell both sets of parents.

Film is well directed by Kerem Sanga from his own script and is probably more realistic about how things would go in this scenario, especially with today’s self-absorbed generation of youth. It’s aggravating to watch Brian constantly lie about his support of Leslie’s decision to keep her babies and even more infuriating to watch him let his selfishness and fear govern how he treats her and the situation. You sit there waiting for him to man-up and take responsibility for his part in her pregnancy, but all he does is lie to her face and run from his responsibilities. In the meantime we feel terrible for poor Leslie whose own rich, self-absorbed author father (James LeGros) wants her to have an abortion, or he will cut off her college funding and money to live. Brian outwardly pretends to side with Leslie, but secretly hopes her father convinces her otherwise. It’s actually heartbreaking to watch so many other people trying to decide what’s right for the young woman without taking her feelings or opinion into consideration. The only ally she really has is Brian’s terminally ill mother. It’s a lot of drama for a film that sometimes quite awkwardly, tries to interject humor into it’s scenario, which doesn’t always work and occasionally makes one uncomfortable as this would be a serious situation in real-life. If the film has any major flaw, it’s the humor doesn’t always mix well with the subject and one would like to think writer/director Sanga isn’t trying to make light of a young woman in such a predicament and wanting to make her own choice. Perhaps there is a thinly veiled statement here as the male characters favor abortion, while the women favor keeping the babies. Echos of our own country where male politicians seem to feel they can speak for women’s right’s…without the woman’s point of view being considered. Hard to believe that this was unintentional as we watch Brian secretly hope Leslie doesn’t go through with having what are his children, too…another point he seems to miss. One other gripe is that at no point do any of the characters mention the option of adoption. It’s either abortion or nothing on the side of those opposed to her keeping her babies and it was infuriating that at no point does anyone suggest a possible compromise of giving the children up for adoption. You’d think at least Brian’s mom would have suggested it, being one of the only people who cared about how Leslie felt. Was this not touched upon for dramatic purposes? Only writer Sanga knows for sure.

The director does have a very good cast even if we want to punch his lead character sometimes. Ryan Malgarini does convey well the terror and selfishness of an already somewhat immature young man who now has to grow up and do the right thing. It makes one angry to see how little consideration Brian gives to Leslie’s feelings and how selfishly he runs from being there to support her and being a man and taking responsibility. It’s a good stretch of the film where Brian becomes unlikable for his lack of maturity and how he hurts Leslie and in that, the actor plays the part very well. We are actually proud of Brian when he finally grows up and steps up and Malgarini makes that work even though we wanted to throttle Brian for the last hour. As Leslie, Hayley Lu Richardson (The Last Survivors, Split, Edge of Seventeen) once again proves she is a star in the making. Her Leslie is a fiery, opinionated young woman and seems to have a good heart and a pretty good head on her shoulders, even if she can be impulsive. Despite her strength and resolve, she still generates a lot of sympathy when the person she should most trust in, Brian, doesn’t support her and outwardly betrays her. That and having her own father try to force her to make a decision she feels isn’t right, is heartbreaking and Richardson has us by the heartstrings without taking her character into over-the-top melodrama. She has a strong screen presence and once again shows her versatility in yet another type of film. The girl has talent. James LeGros is an underrated actor and once again gives a strong performance as the self-absorbed Walter Mallard. He wants his daughter to do what HE thinks is right, ignoring her opinion and the fact that he was a young dad and his life and daughter turned out alright. He doesn’t even consider letting her make her own decision and being supportive and respectful of that. Legros, as with Malgarini, is a good enough actor to make us smile when Walter changes his mind. There is also good work from Joshua Malina as Brian’s father Robert, who is not ready to become a grandfather yet, and a wonderful supporting performance by Melora Walters as Brian’s terminally ill mother who becomes Leslie’s only true supporter and whose only concern is to see her grandchildren before she leaves this world.

I liked this movie. It stirred up some emotions and dealt with the difficult situation of pregnancy at a young age and the resulting turmoil, probably more honestly than one wants to admit. It boldly allowed it’s lead character to behave in a irresponsible and sometimes borderline cold manner and really makes us wait for him to do the right thing. Director/writer Kerem Sanga gets some really strong work from his cast and quite possibly was making a statement about men arrogantly making decisions about a woman’s right to choose. If the film has any flaws, it’s that sometimes the attempts at humor don’t fit the situation and we would like to think Sanga wasn’t making light of a serious subject, just choosing awkward moments to lighten the tone. If you like indie flicks, this is worth checking out.