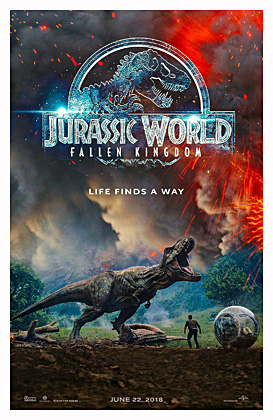 The latest installment of the franchise takes place three years after the disastrous opening of Jurassic World. A volcano on Isla Nublar has become dangerously active and the U.S. government declines to save the animals still there. John Hammond’s former partner, Benjamin Lockwood (James Cromwell) asks Claire Dearing (Bryce Dallas Howard) to join a rescue mission to save the dinosaurs from the doomed island and to convince her ex-boyfriend Owen Grady (Chris Pratt) to join them. Once on the island Claire, Owen and their team are betrayed and they discover that this “rescue mission” has a far more sinister purpose.

Fallen Kingdom is directed by J.A. Bayona, the Spanish filmmaker behind the atmospheric and spooky haunted house flick The Orphanage and the bittersweet fantasy A Monster Calls. His script is by previous installment director Colin Trevorrow and Derek Connor, who co-wrote the last one, as well. The result is a more Gothic feel to the proceedings, especially when the location switches to Lockwood’s old mansion with genetics lab and creature holding cells in the basement a la Dr. Frankenstein. From here It becomes a tale of man’s greed and trying to play god…again. The Indominous Rex taught these greedy corporate types nothing and now we have the genetically created dino-soldier the Indoraptor to serve as our predator of choice for this flick. After the escape from the burning island…which is a very entertaining set-piece in itself, the flick becomes more of a James Bond movie with dinosaurs. The second third finds Claire and Owen sneaking around the castle-like mansion with Lockwood’s granddaughter, Maisie (Isabella Sermon), trying to find a way to stop the sale of and genetic tampering with the last survivors of Isla Nublar. It’s not quite as fun as the last flick, but at least they are trying to take the series in a new direction and we actually get off the island. The last act has the skilled director Bayona going back to his haunted house roots with a cat and mouse chase through the dark and cavernous mansion between our heroes and the Indoraptor, with a very exciting and very Gothic rooftop finale. Overall it is an entertaining flick, though a bit darker, a bit more violent and somewhat less fun than Jurassic World.

The cast is fine, even if the bad guys are complete two-dimensional stereotypes. Pratt and Howard still have that chemistry as Owen and Claire and having them broken-up gives us a chance to experience their combative banter and then having them fall for each other all over again. Young Isabella Sermon is endearing as Maisie, Lockwood’s young granddaughter with some secrets of her own. Rafe Spall, Ted Levine and Toby Jones are the trio of bad guys as Lockwood’s conniving assistant, a soldier for hire and a black market dinosaur dealer respectively. While the characters are familiar and stale, the actors give it their best. Cromwell is charming as the elder Lockwood, who is having his dream corrupted right out from under him. Rounding out the main characters are Justice Smith and Daniella Pineda playing Claire’s IT tech Franklin and dinosaur veterinarian Zia, respectively and they are fun characters well portrayed. We also get a nice cameo with Jeff Goldblum reprising his role as Dr. Ian Malcolm and B.D. Wong returns as slimy Dr. Wu. A good cast though some characters are better written than others.

Jurassic World gave this series a bit of revived energy and while this installment is a bit less fun, it does take the series to some new places and Bayona gives it a darker and more Gothic tone, as well as, his trademark visual artistry. On the negative side, the whole predator du jour chasing our heroes is getting stale, as is genetically whipping up new creatures like ordering a pizza. The dinosaur auction was interesting, but one wonders where the authorities stand on black market dinosaur flea markets. Guess it’s too soon to approach that side of the story. It was fun to see Clair and Owen and company playing James Bond in this massive Victorian Mansion, as we also enjoyed the film leaving us at a point where we wonder if mankind’s meddling might get us slapped back to the stone age. Stay through the credits.