Comedy/drama finds small town wife Sue Buttons (Allison Janney) feeling insignificant and ignored, especially as it is her birthday and no one seems to care. Things change when she catches her philandering, money laundering husband Karl (Matthew Modine) cheating on her at a motel and the surprise of her appearance gives him a heart attack. She buries his body and then concocts a wild story about him being missing and possibly kidnapped, to gain attention. When her ambitious local reporter sister (Mila Kunis) seizes the opportunity for a big story and goes on the air with Sue’s yarn, things start to snowball. Be careful what you wish for, as Sue keeps embellishing upon her story to cover the plot holes and she catches the attention of some of Karl’s shady business partners (Awkwafina and Clifton Collins Jr.) and a suspicious detective (Regina Hall).

Flick is directed by Tate Taylor (The Help, The Girl on the Train) from a script by Amanda Idoko and despite strong work from Janney and a really talented cast, it’s a sadly mediocre effort. The film has it’s moments, but never lives up to it’s potential and is kind of dull, when all is said and done. The script never takes full advantage of it’s premise, despite a promising set-up, and the direction by Taylor is surprisingly very by the numbers. Somber film has none of the manic energy it needs to make this a spirited farce, is never engaging enough on a dramatic level and the spurts of Tarantino-esque graphic violence seem out of place. The cast does what it can with the thin material, but even the likes of Wanda Sykes, Ellen Barkin and Juliette Lewis, in addition to the cast members already mentioned, can’t elevate this routine comedy from being anything more than a moderately amusing diversion…and it struggles with that. On top of everything else, it ends exactly as you’d expect something like this to end. Disappointing considering all the talent involved. 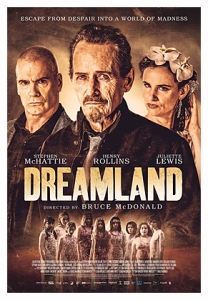 Flick finds hitman Johnny (Stephen McHattie) being tasked by his boss Hercules (Henry Rollins) to cut off the pinkie finger of a fading jazz musician (also McHattie), whom Hercules wants to teach some respect. Not only does Johnny botch this assignment, but makes things worse when he rescues a 14 year-old girl (Themis Pauwels) from Hercules’ clutches, that has been betrothed to a vampire (Tómas Lemarquis). Really! That’s the plot!

Bruce McDonald (Hellions, Pontypool) directs this dull flick from a mess of a script by Tony Burgess and Patrick Whistler. It’s a movie that has too much going on and never finds a way to cohesively bring it all together. We have an aging hitman, an aging junkie, jazz musician, eccentric mob bosses, child trafficking and a vampire…and that’s just for starters. Why did the Countess’ (Juliette Lewis) brother have to be a vampire in the first place? It doesn’t seem to really effect the story too much. What was the point of McHattie playing both characters? It’s actually a little confusing for the first few minutes. Finally, what was the point of all this, as it doesn’t really go anywhere. Despite his noteworthy earlier films, McDonald only succeeds here in making 90 minutes seem like hours. At least his visual style hasn’t failed. The European locations look great, by way of cinematography by Richard Van Oosterhout. Only thing to really recommend here.
-MonsterZero NJ

Cliché filled thriller finds pretty high school student Maggie (Diana Silvers) moving back to her mother Erica’s (Juliette Lewis) home town after her parents separate. Maggie soon makes friends and when out in pursuit of some liquor to party, they meet lonely Sue Ann (Octavia Spencer). Sue Ann starts to buy them booze and soon invites them to use her basement to party in. As “Ma” gets more and more involved in their lives, her behavior starts to get stranger and stranger. Maggie soon starts to believe their new ‘friend’ has ulterior motives for her hospitality, but what is she up to and why?

Aside from an unsettling performance from veteran Spencer and a solid heroine in Silvers’ Maggie, there isn’t much to say about this flick. It’s a routine and very familiar thriller from writer Scotty Landes and director Tate Taylor, who don’t bring anything new to the stalker/crazy person sub-genres. Ma’s hidden agenda is no surprise, as it is revealed to us, over the course of the film, through flashbacks to Sue Ann’s days in high school and what pushed her over the edge, so to speak. It’s nothing we haven’t seen before, plays out exactly as we expect and not portrayed in any way innovative or creative. Aside from good performances from the leads and from supporting cast members Juliette Lewis and Luke Evans, there would be very little to recommend here. The cast, especially Octavia Spencer, deserved better material and we deserved a better movie.

Video game based flick tells the tale of the world of Azeroth, which has been invaded by Orcs from the dying world of Draenor. As the Orcs prepare to open up a portal using the life-force of Azeroth’s citizens and bring in their massive army, an unlikely group of heroes, including a noble Orc chieftain, band together to stop them and save the land.

Co-written, with Charles Leavitt and directed by Moon director Duncan Jones, this is an insufferably boring fantasy adventure. It’s not quite a mess, but seems like a bunch of random action vignettes strung together over the course of it’s 2 hours without much of it actually effecting the already thin plot. The cast is also rather bland with live actors, like Travis Fimmel, Ben Foster, Dominic Cooper and Paula Patton teaming up with CGI creations voiced by other actors. And as for poor Paula Patton, she looked embarrassed and uncomfortable the entire time in her green make-up and lower jaw fangs as a half-breed Orc. The production is lavish and the flick is very FX heavy, yet lacks intensity, substance and most of all, heart. It’s a very cold and dull fantasy that never at any moment is the least bit involving, despite the abundant action and frequent scenes of magic and monsters. And worst of all, you sit through two hours of this mundane sword and sorcery epic for an open ending that resolves little. A waste of two hours unless you are a fan of the game and absolutely must see it. 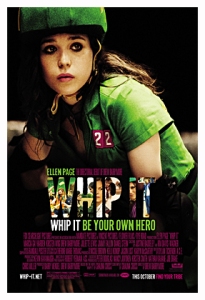 Drew Barrymore scores in her directorial debut with a funny, sweet and fiesty little movie about Bliss Cavendar (Ellen Page), a young woman finding herself and what makes her happy, when she joins a roller derby team. Now all she has to do is keep her straight-laced, beauty pageant obsessed mom (Marcia Gay Harden) from finding out before the ‘Hurl Scouts’ reach the finals!

Sure it’s a bit slow paced and the rollerderby scenes could have had more energy, but for a first flick, Barrymore entertains without being preachy and gets good performances from all her cast, so we’ll let her slide. She also succeeds in presenting the clichéd aspects of the story in a fresh way and earns points there too. An entertaining and fun little indie flick with it’s heart definitely in the right sassy place. Whip It is based on the novel Derby Girl by Shauna Cross, who also wrote the screenplay. Flick  also stars Barrymore, Kristen Wiig, Juliette Lewis, Jimmy Fallon and Green Room’s Alia Shawkat.