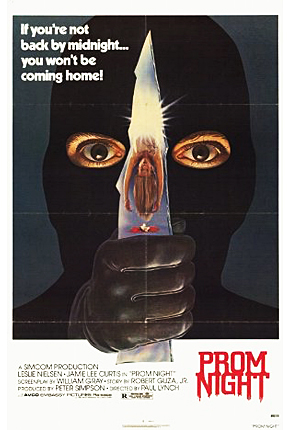 Prom Night is one of the more famous 80s slasher flicks mostly because it stars legendary scream queen/final girl Jamie Lee Curtis among it’s predominately youthful cast. It’s actually glossier and more sedate then most of the horror flicks of the time with a small body count, very moderate bloodletting and virtually no gore. It does have a lot of early 80s nostalgia though, especially with it’s very heavy disco soundtrack that fills the last act of this prom set horror.

The film opens with a group of kids playing a mean spirited variation of hide and go seek in an abandoned building. When little Robin Hammond (Tammy Bourne) goes to join her friends, they turn their attentions toward her and begin to chase and frighten her. Their really mean prank terrifies the little girl right out of a second story window and she falls to her death. Terrified at what will happen if anyone finds out what they’ve done, they all make a pact to never speak of this to anyone and flee. Though, unknown to them, someone has seen them. The police blame Robin’s death on a local pedophile and when they go to apprehend him, he runs and becomes involved in an accident which scars him for life. We then cut to six years later, the Hammonds, including siblings Kim (Jamie Lee Curtis) and Alex (Michael Tough), still mourn their loss as the anniversary of her death approaches…and it falls, unfortunately, on prom night. Complicating matters further is that the high school principal is Robin, Kim and Alex’s father (Leslie Neilsen). Also, at this time, not only has the deformed sex offender escaped, but the four really responsible for Robin’s death, Jude (Joy Thompson), Kelly (Mary Beth Rubens), Wendy (The Boogens‘ Anne-Marie Martin) and Kim’s prom date, Nick (Casey Stevens) are getting ominous and threatening phone calls. Someone knows who the guilty parties are and it seems the anniversary of Robin’s death will be a time of reckoning and the prom will be it’s setting. Has this crazed sex offender come to exact revenge on those who are really responsible, or has a witness to their misdeed decided to stay silent no longer and give little Robin some payback?

As directed by Paul Lynch, Prom Night is a slow burn which is actually fairly common at this point for slashers like this. Pacing and body counts would increase as the 80s horror trend continued, but at this point, Halloween was still the template, which had the creepiness build slowly then cranked things up in the last act. As such, Prom Night doesn’t gives us our first kill till literally an hour in, but from then on it’s a tense last act as our mysterious masked killer hunts down the remaining three victims in the high school hallways while the prom rages on. Lynch is not an overly stylish director. He’s fairly by the numbers, but does build some tension and anticipation with the creepy voiced phone calls and obvious clues that something at school isn’t right. Once the killer is unleashed, the pace and suspense pick-up as his prey are hunted down and slaughtered, as is anyone who might be with them. Lynch does a decent job here with the chills and thrills though, he is far from a John Carpenter.

The cast are all fine with Curtis doing her virginal final girl thing and the rest of the actors looking far too old to be teenagers. Neilsen was still in serious actor mode, but as Airplane also came out this year, that would change. Overall it’s a decent slasher and more-so the film has gained some really fun nostalgia three decades later especially with it’s disco prom complete with floor that lights up and even giving Jaime Lee Curtis and co-star Casey Stevens a Saturday Night Fever-ish dance number that hilariously goes on far too long. The kills are simple but effective and it has enough of what fans look for in slasher flicks in it’s last act. It doesn’t really give us too many suspects to choose from, but the reveal works and actually evokes some sympathy for our killer.

Prom Night was a successful flick and spawned a number of sequels, none of which have anything to do with the original, a film now considered an 80s classic. It used a time honored slasher formula… someone violently avenging a wrongful death and represents this era of early 80s horror fairly well. Not a great movie, but well done enough and very representative of it’s time. There was also a forgettable remake in 2008 which hardly qualified as a remake as it actually used just the title, but had it’s own storyline.

3 glass shards… one of our Prom Night killer’s preferred weapons of choice.