I know this is the Movie Madhouse, but I will review a book now and then, one that I really loved or one that pertains to the movie world…and what pertains more than a memoir by the man behind the horror classic Phantasm…Don Coscarelli.

TRUE INDIE-LIFE and DEATH in FILMMAKING by DON COSCARELLI

Don Coscarelli is one of my favorite filmmakers and his Phantasm one of my all-time favorite horror films. So of course I was very excited to read his memoir, detailing an almost forty year career as an indie filmmaker…and it didn’t disappoint. Coscarelli gives a brief account of his upbringing and then on to his first attempt to make a feature film, a drama called Jim, The World’s Greatest. He then weaves a fun and informative account of his film career spanning from the making of Kenny & Co. in 1976, to his classic Phantasm, to the harrowing production of the Beastmaster, all the way up to his recent Phantasm: Ravager. The stories of what Don and family and friends went through to get some of his flicks made, and then released, will really give you an idea of how difficult it is make a movie, especially if you don’t have big studio backing…which comes with it’s own headaches. It’s a real treat to hear the production stories of how his movies were made…or not made in some cases…and how even now getting a film going is still not easy even for a man considered a horror legend.

True Indie is a fun true life story woven by a man with a talent for overcoming adversity and for telling an entertaining, sincere and heartfelt story…the account of the final moments he shared with his star and friend Angus Scrimm will have you in tears. A tale of arrogant investors, eccentric actors, the MPAA and those darn silver spheres! A great book if you are a fan of Don Coscarelli, horror films or just independent filmmaking in general, this is a must read! 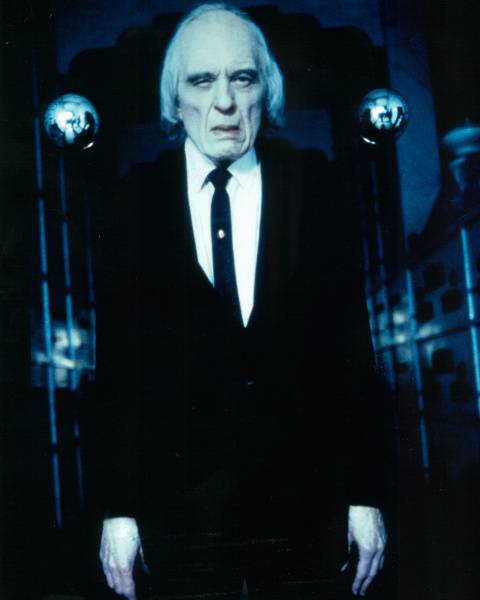 Today marks the birthday of horror film legend Angus Scrimm! Renown to fans worldwide as Phantasm‘s Tall Man, he has terrified and delighted us with his legendary performances as one of horror’s greatest icons for over three decades with a 5th Phantasm film on the way!

MonsterZero NJ’s Movie Madhouse celebrates the legacy of Angus Scrimm and his contribution to horror and fantasy cinema on this, his birthday!

For a review of the coinciding Angus Scrimm film, just click on the poster 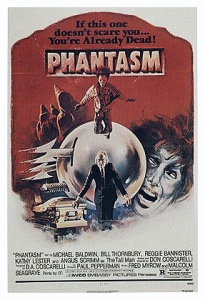 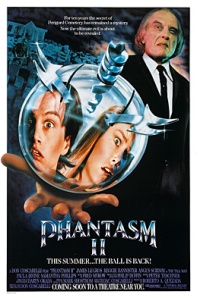 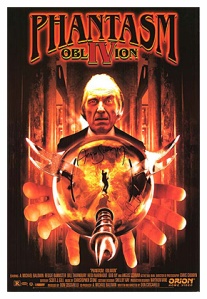 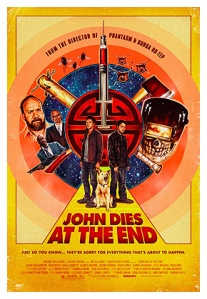 John Dies At The End is an adaptation of David Wong’s book of the same name written and directed by Don Coscarelli (Phantasm, Bubba Ho-Tep). While not familiar with the book, the bizarre and surreal story does seem like a perfect fit for Coscarelli, as his films have alway had a touch of both the surreal and a bit of offbeat whimsy.

The film starts out with David Wong (Chase Williamson) telling his bizarre tale to a reporter, Arnie Blondestone (Paul Giamatti). Wong starts to spin a tale involving himself and his friend, John (Rob Mayes) and their encounters with a powerful drug with a mind of it’s own called “soy sauce.” This bizarre narcotic not only gives the user (if they survive it) heightened psychic awareness, but opens doorways to alternate dimensions. Once doors are opened, they are opened both ways and John and David must try to stop the beings from the other side from entering our world and making it their own.

John Dies is a very strange yet amusing head trip of a movie that won’t appeal to everyone, but under Coscarelli’s guidance, will entertain those who like a movie that isn’t afraid to be weird and unconventional. Coscarelli moves things along briskly and we find out what’s going on along with David and John as the story unfolds in flashback. The tale focuses mostly on David, as he’s is trying to find out how his friend John’s sudden bizarre behavior one night ties in with meeting a very strange Jamaican (Tai Bennett). As he tries to figure out the surreal occurrences now happening around him, he is drawn into a tale that is the stuff of hallucinogenic nightmares and it becomes a quest for he and John to save the world. Coscarelli wisely uses live effects for most of his surreal sequences and otherworldly creatures and what little digital effects there are, are used sparingly and are decent enough. The live action animatronic creatures and gore are very well done by Make-up FX master Robert Kurtzman and his team and who doesn’t prefer to see live prosthetics over CGI. Coscarelli is one of those filmmakers that is very adept at making good use of a small budget and probably would be lost on a Hollywood blockbuster and it is one of the things so endearing about him as a filmmaker. And here he achieves a lot of visual impact on his small budget.

The director has also cast the film well, too. Everyone is efficient and effective in their roles and approach the material with appropriate seriousness, but not without a few winks at the audience. Williamson and Mayes are fine and handle the bizarre material well. Clancy Brown in particular seems to be having fun as a TV mystic, but keeps his performance grounded enough to not spill into camp. Giamatti is simply one of the hardest working and best actors out there. There is also a delightful cameo from Phantasm’s Tall Man, Angus Scrimm as well, to please fans of that series.

All in all, this isn’t everyone’s cup of tea, but if you like stuff offbeat and a bit out there, then this is a fun low budget fantasy, that is refreshingly and unapologetically weird in a good way.